Skip to content
Home/Blog/“I fight on for all our Meso Warriors past, present and future.” – Mavis’ Story

“I fight on for all our Meso Warriors past, present and future.” – Mavis’ Story 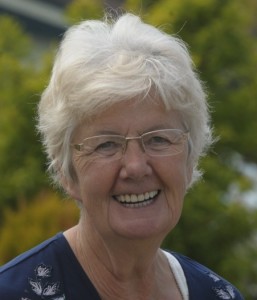 We would like to honor the courageous story of Mavis (United Kingdom) – especially as we are celebrating 2011 Global Asbestos Awareness Week.

Treatment: Treatment is at the Royal Marsden in Surrey. Every two weeks I have a half hour infusion. of the MK3475 and I will carry on as long as I get shrinkage which so far is almost 60%, and my body still tolerates the drug

I’m just an ordinary woman who married at 18 and washed my husband’s clothes as he came home from work at the Chatham Dockyard as a Shipwright. I didn’t know the powder on Ray’s clothes was anything other than dust bought home from work. I shook his clothes and then put them in the washing machine. Forty-eight years later I find I have mesothelioma and a death sentence of 3 months.

We lived a wonderful healthy life and bought up a family. I went to keep fit classes and walked miles with the dogs in our lovely countryside. Then we retired in 2000, sold our house, moved to the coast, bought a motor-home and settled into retirement.

Forty-eight years later and after a two month stay in Spain I couldn’t breathe and the story of mesothelioma began.

I had been to the GP as my arm had gone numb and I burnt myself on an iron but didn’t feel it. He thought I had a trapped ulnar nerve and made an appointment for me to have an X-ray and see a specialist.

In May I went to vote and I just couldn’t breathe. When I got home, to my amazement the GP phoned and told me the results of the X-ray were showing a mass and they had arranged a bed at the hospital for me to have my lung drained.

This was carried out and from the fluid they found cancer cells and believed I had mesothelioma.

That led to me being given 3 months to live. I didn’t accept that and after my pleurodesis at the Guy’s Hospital in London, I started chemo.

Cisplatin and Alimta which is the standard treatment in the UK. This worked for fifteen months then started growing again.

I was offered the NGR-hTNF trial at Maidstone, this clinical trial acts on the tumours blood vessels which I’m afraid didn’t work for me or I had a placebo. So two sessions of Cisplatin and Alimta, I became allergic but it did work and we had stability again for a while…then growth was found in my next scan.

What would I like next as there are no new trials or Chemo? I’m not used to a doctor having no answers.

I emailed Saint Barts Hospital and that Friday I was in an appointment where Peter offered me the last place on the ADAM Trial, but it would mean another Bi-op and then I might not even be suitable.

He threw me a life line of GemCarbo chemotherapy and I could have that locally. Back to Canterbury and I was on chemo again until September.

Then a Doctor gave me the advice to go to the Royal Marsden where they were starting a trial that might suit me, so I asked my Oncologist and she referred me and May 2014  I started Phase 1 trial of Immunotherepy.

It isn’t just for mesothelioma but the trial,, MK-3475, is a drug being tested as it blocks the interaction of a substance called PDL-1 with PD Inhibitor.This drug has worked for me and to date I have had almost 60% shrinkage. We dont know what the future is but wouldn’t it be great if the shrinkage took it down to 0%. Im on the drug for as long as my body tolerates so we just do not know what is going to happen.

I fight on for all our Meso Warriors past, present and future. I will carry on working within the NHS as a Patient and Trail Rep alongside TSSG Lung Members and attend many conferences and workshops around the country, I feel Im giving back to thank the Royal Marsden and the NHS and all the wonderful Doctors and medical staff I have met for giving me longer than the original forecast of 3 months.

Mavis has not let a diagnosis of mesothelioma curtail her passion for life. In fact, since her diagnosis, she has helped raise awareness of asbestos in the UK through her online blog, a book, and other social media outlets.

Mavis decided to write a blog after she was diagnosed with mesothelioma in 2009 as a way to keep her friends and family updated while she underwent treatment. Originally, Mavis was told she had 3 months to live, and while everyone around her was shocked and worried, Mavis moved forward with treatment.

Before her diagnosis, Mavis was a very active person. She attended fitness classes, went swimming, walked in the countryside sometimes up to 14 miles, and without fail, walked her dog 2.5 miles every day. While on holiday in Spain in 2009, she unknowingly burned herself with an iron but didn’t realize it. But her body did react – her arms and hands twisted in, her feet went numb, and she suddenly couldn’t breathe. At K&CC Hospital, 5 liters of fluid were drained from her lungs and she underwent a VATs operation with Talcum Powder to prevent future fluid build-up. She was then diagnosed with mesothelioma and given a life expectancy of 3 months – 2 years.

Mavis never worked directly with asbestos. Instead, she washed her loving husband Ray’s clothes when he returned home from the Dockyard where he worked as a Shipwright after leaving the National Service. While Mavis was diagnosed with mesothelioma, Ray developed scarring on his lungs.

Mavis went on to receive chemotherapy – a combination of Alimta and Cisplatin in New York and also radiation. The 10 hours of chemotherapy pumped into her veins made her sick the next day and weakened her to the point it was difficult to walk around. But just as she regained her strength, 21 days were up and it was time for her next round of chemo. After 4 sessions, Mavis learned that her CT scan showed she was stable. About a year later in August 2010, her oncologist was excited to tell her that her tumor had shrunk. He told her “we don’t often sit in this chair and give out good news but today is an exception.”

Since then, she’s enjoying life and is now able to walk her dog again, though she does tire easily. Ray and Mavis have also gotten good use out of their motorhome recently. In the last four months they have covered over 4,000 miles in the UK.

On March 14, 2011, Mavis learned that her tumor is growing again. She will undergo her second line of chemotherapy in May 2011. Meanwhile, she is also finding trials at St Barts in London under Jeremy Steel who she visits Friday April 8th. She remains positive and continues to tell her story. In fact, her blogs have received more than 30,000 hits in 2 years.

She has found so many friends on Facebook (the MesoWarriors) where everyone helps each other and discusses everything including treatments and what we are going through. And ADAO has been a diving board for her to tell her story and she also promote ADAO’s message through Twitter and Facebook, where she shares all of Linda Reinstein’s messages. Mavis is raising money for her new charity, Mesothelioma UK. Social media’s instant access to the world has allowed her even to connect with a support group in Australia through Skype. Mavis says that, “I wouldn’t have been able to achieve half of what I have if it wasn’t for the social media.”