Skip to content
Home/Blog/Standing at the Intersection of Criminal and Civil Justice — Asbestos Victims Unite with Commentary by Dr. Barry Castleman

Standing at the Intersection of Criminal and Civil Justice — Asbestos Victims Unite with Commentary by Dr. Barry Castleman 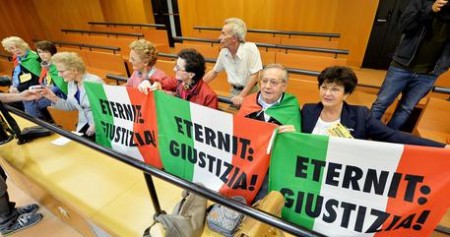 There is a court case like none the United States has ever seen taking place in Italy.  Billionaire Stephan Schmidheiny is facing trial for the voluntary murder of 392 people who died from asbestos-related diseases in the town of Casale Monferrato.  Schmidheiny, the former owner of the Swiss Eternit asbestos group, was found guilty last May of involuntary manslaughter and sentenced to four years in prison.  It seemed to be the end to one part of decade-long long battle, but he still must face further trials over asbestos-related deaths in in Piedmont and Naples.

According to Forbes, after Schmidheiny’s guilty verdict in May, “prosecutor Gianfranco Colace said the ruling was the ‘first step’ in setting a precedent on deaths from cancer and pulmonary diseases, which can take years to develop after contact with asbestos fibers.”

Barry Castleman, ScD, is currently in Italy, and sent the Asbestos Disease Awareness Organization (ADAO) the statement below about the current proceedings.

A week before the hearing in Vercelli, Italy, to decide whether Schmidheiny would be tried for manslaughter or murder, an interview with Stephan Schmidheiny appeared in the Zurich newspaper, NZZ Am Sontrag.  Schmidheiny’s remarks from the Swiss German newspaper were promptly republished in Italian by a Swiss unionist and journalist, including these statements:

“I have no intention of seeing an Italian prison from the inside.”
“We did all that was possible and what was reasonably expected on the basis of the knowledge available at the time to solve the asbestos problem.  However, 40 years later, one is accused of mass murder and persecuted for decades.  Such is life.”

“… I had to take my mental health into consideration and not let all these incredible attacks get me down… It all started with daily meditation exercises.  I realized I hated Italians, and I was the only one to suffer because of it.  I therefore worked focusing on the situation.  Today when I think of Italy I just feel pity for all the good and honest people who are forced to live in this failed state.”…
“Sometimes I am surprised I survived that time with all the problems linked to asbestos and the hostility.  I am a rather sensitive person.”

Stephan Schmidheiny’s statements from the Swiss German newspaper interview were prominently reported in Italian newspapers (La Stampa) as the major court hearing began.  His remarks were angrily denounced in the court in Vercelli, where a magistrate was about to rule on the charge he would face for causing 392 deaths in Casale, 62 among former workers and an astounding 330 (84%) among community residents merely from environmental exposure.  One prosecutor said, “Once again, Stephan Schmidheiny shows no pity towards asbestos victims.”  Another said, “I am very bitter.  Is this the respect the defendant shows not so much toward us, the magistrates, the courts, but to the hundreds who died?  Schmidheiny’s words hurt because they reveal how little respect he has toward us, our state that he calls a failed state, and towards his own employees that he sentenced to death.”

Schmidheiny’s lawyers, who whine about translations when all else fails, replied to the court that they had been told that the Swiss Italian article had mistranslated his remarks, providing no specific examples.  Some people present in court thought Schmidheiny had lost it mentally, doing that arrogant Trump-tweet interview right before the critical hearing in Vercelli.

The magistrate ruled that Schmidheiny will be tried for murder in 392 deaths in the Court of Assizes, starting November 27, 2020.

This is important.  Had the magistrate’s ruling been manslaughter instead of murder, prosecution for all but about 40 deaths would have been dropped due to the statute of limitations.  No such limitations apply for the charge of murder.  Evidence of reckless, willful disregard might have been limited in a manslaughter trial.  Had the magistrate ruled that the charge would be manslaughter instead of murder, the case would have been tried before a single judge.  The trial court in the Court of Assizes will instead consist of two professional judges and six citizen judges, aged 35 or older chosen off the voters’ rolls.  In other words, this will be a jury trial.

The world has known that asbestos is a cancer-causing carcinogen for over 50 years, yet it is still legal and lethal in many countries, including the United States. Last year, over 100 metric tons of raw asbestos were imported to the U.S., where nearly 40,000 people die each year from asbestos-related diseases such as mesothelioma and lung cancer.

ADAO firmly believes that those responsible for importing asbestos, knowing full well that there is no safe level of exposure to the carcinogen, should be held responsible. We look forward to seeing if the effects of Schmidheiny’s trial reverberate in our country.

ADAO stands together with AFeVA and others for justice!