ADAO BLOG: State Attorneys General From Across the Nation Take Action by Petitioning the EPA to Require Reporting on Asbestos Imports and Uses

Americans Deserve the Right to Know Where Asbestos May be in Home, Schools, and Workplaces 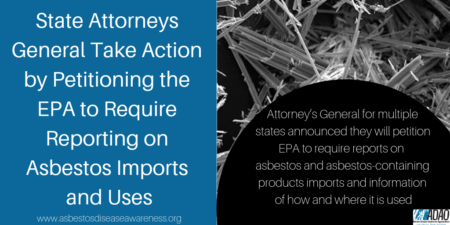 Washington, DC — January 31, 2019 — The Asbestos Disease Awareness Organization (ADAO), an independent nonprofit dedicated to the prevention of asbestos exposure through education, advocacy, and community work, applauds the announcement today of the Attorneys General of 14 states and the District of Columbia that are petitioning the Environmental Protection Agency (EPA) to require the asbestos industry to file reports on their imports of asbestos and asbestos-containing products and inform the Agency of how and where they are used.

Linda Reinstein, ADAO President and CEO stated, “We are grateful and pleased that the states are showing leadership in holding the Trump’s EPA accountable for its reckless disregard of public health. When they denied ADAO’s petition, EPA irresponsibly refused to collect information that its own scientists need to do their jobs properly and that workers and the public need so they know whether they are being exposed to asbestos and can protect themselves from harm.”

The state AG petition echoes the September 26, 2018 petition to EPA by ADAO and five other groups seeking similar reporting requirements for asbestos and disclosure of critical information about asbestos use and exposure to the public under the Toxic Substances Control Act (TSCA). EPA denied that “Right to Know” petition on December 21, 2018, and continued its pattern of failing to protect Americans from this deadly substance.

The original petition from ADAO and other groups demonstrated that, because of a loophole in EPA regulations, the largest asbestos importer, Occidental Chemical Corporation, had failed to notify EPA of the amounts of asbestos it was bringing into the U.S.

Asbestos is among the most dangerous chemicals ever produced. Expert bodies agree there is no safe level of exposure. Recent research indicates that nearly 40,000 asbestos-related deaths occur in the US each year. Yet asbestos importation and use remains legal in the US, with limited exceptions. ADAO research proves asbestos imports surged in 2018.

Concurrent with the state filing, ADAO sent a letter to Acting Administrator Wheeler to reverse his denial of the ADAO petition and submitted an extensive rebuttal of EPA’s grounds for rejecting the petition.

Bob Sussman, counsel for ADAO and a former EPA official, said that “the petition denial is riddled with errors of law and fact, misrepresents the basis for the petition and ignores information in the docket and EPA’s own past statements. We believe a reviewing court would overturn the petition denial and order EPA to require reporting on asbestos.”

The Asbestos Disease Awareness Organization (ADAO) was founded by asbestos victims and their families in 2004. ADAO is the largest non-profit in the U.S. dedicated to providing asbestos victims and concerned citizens with a united voice through our education, advocacy, and community initiatives. ADAO seeks to raise public awareness about the dangers of asbestos exposure, advocate for an asbestos ban, and protect asbestos victims’ civil rights. For more information, visit www.asbestosdiseaseawareness.org