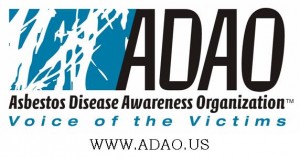 “On behalf of the Asbestos Disease Awareness Organization (ADAO), we are pleased to announce that the Montreal-based pro-asbestos Chrysotile Institute has officially announced its closure. ADAO travelled to Washington, D.C. in October 2011 to discuss the asbestos problem with Canadian Embassy officials and is thrilled to hear the news of the end of such a large pro-asbestos Canadian entity. The Institute, first formed in 1984, has for decades promoted the safe use of chrysotile asbestos on behalf of Canada’s asbestos mining industry. Poignantly, news of the institution’s closure first broke on Saturday, April 28, recognized around the world as International Workers’ Memorial Day, and subsequent phone calls discovered that the institute’s phone number was no longer in service. This signals a momentous step towards the cessation of the mining and exportation of asbestos in Canada, and symbolizes a promising future for the effort to globally protect public health.  According to the Montreal Gazette, Pat Martin, Member of Parliament, a former miner and longtime critic of the asbestos industry, said, “I see it as a real tipping point in the movement to get Canada out of the asbestos industry.”

On the heels of the Eternit criminal verdict for Stephan Schmidheiny and Louis Cartier de Marchienne in Turin, Italy, ADAO is confident in the global progress towards an end to asbestos. However, while the Canadian Chrysotile Institute was a hugely powerful government-sponsored supporter of asbestos and pro-asbestos rhetoric, it is important to remember that equivalent organizations still exist in asbestos-producing countries such as Russia and Brazil. The World Health Organization estimates that 107,000 people die every year from asbestos-related diseases and our battle is far from over yet.”

About Asbestos Disease Awareness Organization
The Asbestos Disease Awareness Organization (ADAO) was founded by asbestos victims and their families in 2004. ADAO seeks to give asbestos victims and concerned citizens a united voice to raise public awareness about the dangers of asbestos exposure. ADAO is an independent global organization dedicated to preventing asbestos-related diseases through education, advocacy, and community. For more information, visit www.asbestosdiseaseawareness.org.