Stay Safe from Asbestos After the Storm — Resources and Strategies 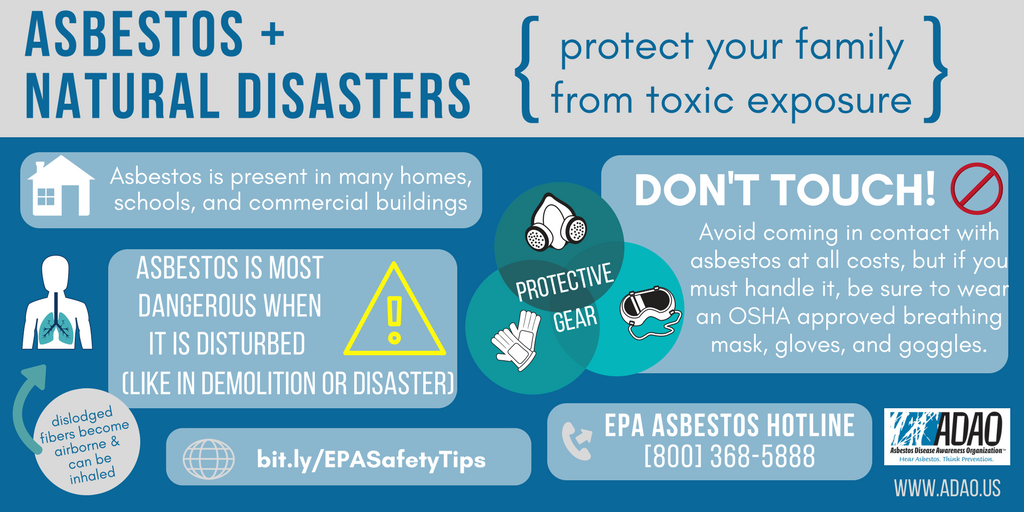 As Houston residents return to their homes and lives post-Harvey, and first responders head down to Florida to battle Irma, we at ADAO hold those affected by the storms in our hearts and thoughts.

As we learned during Katrina, Sandy, and other destructive disasters, there will be asbestos exposure during the clean-up and rebuilding following Hurricanes Harvey, Irma, and Jose, as some building materials contain asbestos roofing, tiles, insulation  cement, insulation, and more.

There is no safe level of exposure to asbestos, a known carcinogen, and it becomes especially dangerous when the microscopic asbestos fibers become dislodged and airborne, making it easy for humans and animals to inhale them.

For those in storm zones, as you begin to rebuild your homes, schools, or workplaces, if you suspect the building may contain asbestos materials, use the following safety strategies:

Asbestos-caused diseases, including mesothelioma, are preventable. But to protect ourselves and our family, we must face the facts and learn what safety measures to take.