“The 2013 ADAO Conference: The Asbestos Crisis” by Yvonne Waterman 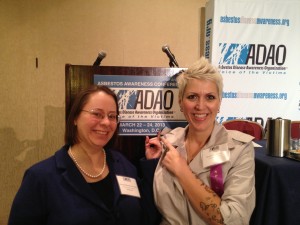 On March 23, 2013, the Asbestos Disease Awareness Organization (ADAO) hosted their 9th Annual International Asbestos Awareness Conference. I joined a large audience in Washington D.C. to listen to the latest global developments regarding asbestos, particularly the prevention and treatment of asbestos diseases. Over thirty of the top international specialists were there, as well as visitors from many nations who came literally from the ends of the earth to listen, learn and share this new knowledge. I know of no other asbestos network that can match the huge effort that went into the astoundingly detailed organization of it all – but as ever, the global network of ban-asbestos victims, activists and advocates benefitted immensely from this inspiring event. Let me share some of my impressions with you.

What was on offer? The first session of the day concerned the medical advancements in treating asbestos diseases. ADAO President and Co-Founder Linda Reinstein, Meagan Jensen, and Drs. Richard Lemen, Arthur Frank, Paul Demers, Christine Oliver and Brad Black spoke of diagnosing and treating, monitoring and screening, governing (or rather the lack thereof) and exposing. Several presenters worryingly mentioned the increasing (and accepted) funding by Russia of the IARC institution – a highly suspicious development, considering that Russia has the biggest operative asbestos mines in the world and therefor an agenda that would seem entirely incompatible with the nature of the IARC’s monographs on asbestos.

The keynote speaker, Dr. Aubrey Miller, was particularly impressive in his speech on public health issues and concerns for the environment and the workplace. I noted with wonderment his explanation that ‘asbestos free’ in the U.S.A. legally means ‘99% asbestos free’ – meaning that an astonishing 10% of all advertised ‘asbestos free’ consumer products, including toys, do in fact contain asbestos.

Next, patients and caregivers gave voice to the difficulties encountered in navigating the medical maze. Kristin Samuelson, Eleanor Ericson, Lisa Hyde-Barrett, Elizabeth Ness and Linda Reinstein spoke about supportive resources for those suffering from asbestos cancers, the vicissitudes of clinical trials and their ardent wish for a global asbestos ban.

The third session addressed practical issues. John Thayer, Brent Kynoch, Tony Rich, Sean Fitzgerald, Tom Laubenthal, Dr. Charles Levenstein and Jim Millette spoke of asbestos in public places, houses, schools, the workplace, the environment, and consumer products. In short, the overpowering presence of asbestos everywhere. For instance, Dr. Charles Levenstein warned that students and their parents having knowledge on asbestos is vital to enforcing asbestos regulations in schools. Also, that the interest of the American government regarding asbestos in schools is negligible – despite the fact that the nation’s future spends long and mandatory hours there. It was painful for me to listen to this, remembering from a lesson learned at an earlier ADAO conference that young lungs are especially vulnerable to asbestos. The situation is not much different from my own country, The Netherlands, I am sad to admit. 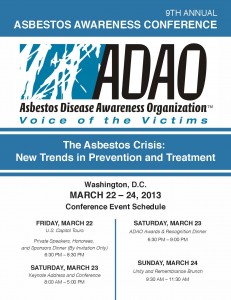 The last session focused on global advocacy, with Emily Reinstein, Jordan Zevon, Barbara Minty McQueen, Jill Cagle, Heather Von St. James, Dr. Barry Castleman, Fernanda Giannasi, Christine Winter, and Geoff Fary representing and empowering asbestos victims. Dr. Barry Castleman spoke of the global developments in civil and criminal litigation. Fernanda Giannasi, a Brazilian labour inspector, impressively recounted her struggle to bring the asbestos fight from the mine to the courtroom. Heather Von St. James told the audience her own moving story: surviving mesothelioma. I found this to be so heartening: to be able to tell asbestos victims back home that surviving and enjoying good health again in the warmth of loved ones is not entirely impossible, that hope may indeed live, however small as yet. I have met a mesothelioma survivor!

As the saying goes, last but not least, the conference was rounded off by an Awards and Recognition Dinner with a guitar performance by Jordan Zevon. Jordan, U.S. Representative Lois Capps, Dr. Celeste Monforton, Karen Banton, the International Association of Heat and Frost Insulators and Allied Workers, Rob Cagle and Mavis Nye were awarded a selection of well-deserved awards.

Though perhaps not strictly part of the conference, a Unity and Remembrance Brunch the next day gave a powerful voice to asbestos victims. The keynote speaker, Karen Banton, gave a spirited speech: ‘We are not Victims, we are Victors.’ Lou Williams spoke on the shared strength between the Mesothelioma Warriors, while Jill Cagle sang Blessings, leaving the greater part of her audience (including me) teary-eyed with the emotions and memories she invoked in us.

Now, writing these thoughts down back home, I wonder: what is the most important message that one takes home from the ADAO 2013 conference? And I know with certainty in my heart that it is this: sharing makes us stronger. Freely sharing knowledge of all sorts, networks, strength and even emotions, finding a treatment or cure together, preventing future victims, fighting the injustice that is so often a part of asbestos tragedies will win the global fight against asbestos and the harm and hurt that follow it even decades later. And that’s why it’s important to cross the oceans and take part in international asbestos conferences. Please remember this, when the ADAO 2014 comes up!