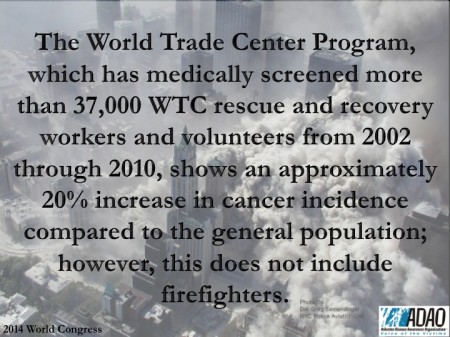 Our hearts are heavy at the Asbestos Disease Awareness Organization (ADAO) as we remember the nearly 3,000 innocent lives that were taken 13 years ago.

Countless more have died since then due to toxic exposure. When the towers collapsed, building debris blanketed Lower Manhattan, exposing thousands of residents and workers to known hazards in the air, including over 1,000 tons of asbestos. September 11, 2001, was the deadliest day in history for New York City firefighters as 343 were killed . A comprehensive cancer study of New York City Firefighters after 9/11 found that firefighters working at the site of the terrorist attacks contracted 10% more cancers than the general public and 19% more cancers than firefighters who did not work at the site.

The World Trade Center Program, which has medically screened more than 37,000 WTC rescue and recovery workers and volunteers from 2002 through 2010, shows an approximately 20% increase in cancer incidence compared to the general population; however, this does not include firefighters.

One of the many tragedies of 9/11 is that several men and women who courageously served as first responders at Ground Zero are now suffering from preventable asbestos-caused diseases, highlighting our country’s deadly legacy of utilizing asbestos products. As a nation, we have an opportunity to prevent such tragedies in the future – beginning by banning the import of asbestos. Unbeknownst to many Americans, asbestos remains lethal and legal in the USA and imports continue.  How many more must suffer before we say: “Enough”?

After an eight-year odyssey, The National September 11 Memorial Museum opened on May 21, 2014.  As their mission statement reminds us, “May the lives remembered, the deeds recognized, and the spirit reawakened be eternal beacons, which reaffirm respect for life, strengthen our resolve to preserve freedom, and inspire an end to hatred, ignorance and intolerance.”

On behalf of ADAO, I send the families of 9/11 my heartfelt condolences as we reinforce our commitment to education, advocacy, and community support. We will never forget those we lost on 9/11 and those who battle disease today. In the spirit of raising awareness, we encourage you to share our latest Infographic “Irrefutable Facts About Asbestos.”

John, I will always remember you.