Our hearts are heavy at the Asbestos Disease Awareness Organization (ADAO) as we remember the nearly 3,000 innocent lives that were taken in the 9/11 terror attacks. As we think back on that fateful day now 16 years ago, we also must honor those who continue to suffer the fallout of these attacks. 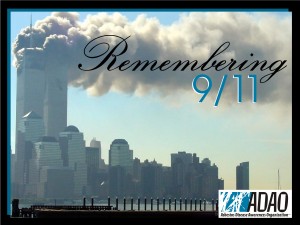 Tragically, many of those who courageously served as first responders at Ground Zero are now suffering from chronic illnesses and cancers caused by asbestos and other toxins they were exposed to when they rushed into the disaster to save innocent lives.

“The World Trade Center Health Program (WTCHP) monitors and treats over 67,000 WTC rescue/recovery workers in its Responders cohort and over 12,000 community members in the Survivors Program,” said Dr. Michael Crane, Director of the WTCHP at Mount Sinai Hospital. “Over 50% percent of these workers and community members are afflicted with chronic, exposure-related conditions,” which represents a 7% increase over last year in the number of chronically ill patients in the program.  Since the program’s inception, 1,387 members has died.

“Unfortunately more of our patients are developing cancer― we certify patients with WTC-related cancer 10-15 times or more per week,” Crane said.

The dust that spread as the towers came down was laced with toxic substances, including ground glass, lead, gypsum, calcite, and asbestos — hundreds of tons of asbestos. For more than a century, asbestos has been known to cause disabilities and death. Exposure can cause mesothelioma, lung, gastrointestinal, laryngeal, and ovarian cancers, and non-malignant lung and respiratory diseases. Though a known carcinogen since the early 20th century, asbestos was widely used in the construction of the World Trade Center, including in the application of since-banned fireproofing asbestos spray. Since 1900, the U.S. has consumed 31 million metric tons of asbestos, and it remains legal and lethal in the US, despite the incredible human cost.

The National September 11 Memorial Museum opened on May 21, 2014 and their mission statement reminds us, “May the lives remembered, the deeds recognized, and the spirit reawakened be eternal beacons, which reaffirm respect for life, strengthen our resolve to preserve freedom, and inspire an end to hatred, ignorance and intolerance.”

The terrorism that led to these heinous attacks is proving difficult to combat, but we have an opportunity to prevent public health tragedies like this in the future – beginning by banning the use of carcinogenic toxins like asbestos.

On September 26th, the Asbestos Disease Awareness Organization (ADAO) will be hosting our 12th Congressional Staff Briefing to educate the Senate on the continued yet entirely preventable risk asbestos poses to the American public. At this meeting, we will ask them to consider the thousands of Ground Zero workers who became victims of asbestos exposure 16 years ago today. It’s time we honor their sacrifice with a promise to protect the future generations of American heroes who will follow in their footsteps.

On behalf of ADAO, we send the families of 9/11 my heartfelt condolences as we reinforce our commitment to education, advocacy, and community support. We will never forget those we lost on 9/11 and those who battle disease today as a result of the their heroic bravery.

“These guys saved us,” said Dr. Raja Flores, chairman of thoracic surgery at New York’s Mount Sinai Medical Center. “It is now our turn to save them.”