The Ahmed Family: Bringing Asbestos Awareness and Action to Pakistan

The International News: February 2, 2014 Banned across the world, asbestos continues to plague Pakistan

From the Ahmed family’s dining room table in Pakistan to our U.S. home office at the Asbestos Disease Awareness Organization (ADAO), our global “Ban Asbestos” family continues to grow stronger. ADAO is thrilled to support the Ahmeds’ first Ban Asbestos Conference in Pakistan to be held on February 1, 2014 at the Marriott hotel in Karachi.  The response to this event has been overwhelmingly positive, and the list of Pakistani dignitaries and experts who will present the latest facts and stats is impressive. Lou Williams and I are honored to present via Skype at this important conference.

Since 2007, Syed Haroon Ahmed has been investigating the death of his brother, Syed Fareed Ahmed, from cancer of the tongue at age 55. Through his research, he’s uncovered countless examples of dangerous exposure to asbestos at the Dadex factory where his brother worked in Karachi, Pakistan.

Directly from Dadex’s website, ADAO found this: “Dadex has been manufacturing Chrysotile Cement (CC) pipe systems for over 45 years in Pakistan. They are durable and versatile, and have a wide range of applications.”

Chrysotile is a type of asbestos.  There is no safe level of exposure to asbestos, yet chrysotile asbestos use remains legal and lethal in Pakistan and in the United States.

It is likely that chrysotile asbestos from the Jeffrey Mine in Quebec, Canada was shipped to the Dadex Plant. Pakistanis who work for Dadex and live nearby continue to be exposed to deadly asbestos dust. Dadex in Karachi sits in a densely populated urban neighborhood with a playground located just across the street.

The fight against asbestos has been building in Pakistan since 2006 when the All Pakistan Federation of United Trade Unions wrote a letter to the Pakistani government stating, “The scientific and medical evidence on the dangers of this building material is beyond doubt.” Mr. Ahmed continued the fight by filing a complaint in 2009 within the Pakistani judicial system. His case has been taken all the way to the Supreme Court, but today remains still unresolved. Most horrifically, no action has been taken to protect the people being exposed. Due to the delay between asbestos exposure and the onset of diseases, we know that preventable deaths will continue far into the future and the ramifications of the exposure have not even really begun to surface. As The News International reported in July 2013: “A personal loss has unfolded a collective tragedy in Karachi where a factory dumping site in Gadap Town exposes over two million residents to cancer-causing chemicals (Chrysotile asbestos) that annually take 100,000 lives at the global level resulting in its ban in 52 countries.” Although it is clear that more progress must be made, the people’s fight over asbestos is beginning to show signs of positive momentum. In 2012 the Pakistani National Assembly (NA)’s Standing Committee on Human Resource Development recommended a complete ban on the import and use of dangerous chemical ‘asbestos’ in 22 industries of the country to safeguard the health of workers.

Change can start with one voice.  During these past years, the Ahmed family and others have been working to ban asbestos in Pakistan. They have started the Syed Fareed Ahmed Memorial Mesothelioma General Hospital Foundation to raise asbestos awareness and build a community united against the use of asbestos in Pakistan and worldwide. 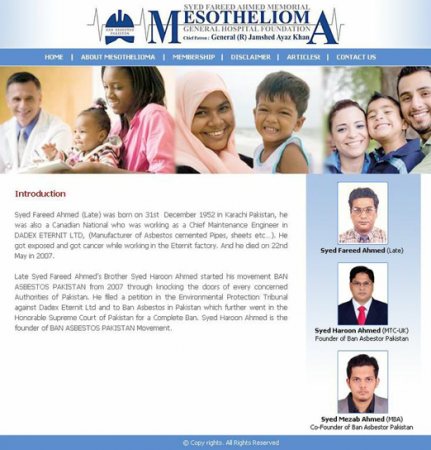 Since 2011, ADAO has had the pleasure and honor of getting to know Ahmed’s son, Mezab, who has the same courageous nature of his father and uncle – he refuses to give up.  This case

[1]
is not just about the plaintiffs, but the violation of human, environmental, and civil rights of those in Pakistan and throughout Asia.  Over the past month, many letters of support have come in from around world in support of Mezab’s family. Although ADAO has written the Supreme Court of Pakistan in support, we need to do more – we need to share his story.

The Ahmed family wants the same treatment for Pakistanis that other countries have fought for and won. They want the company that exposed people to deadly asbestos to be responsible for their medical care. They want the company to take action and to dispose of asbestos debris safely to prevent future asbestos exposure to workers, children and nearby residents of Karachi. And above all, they want Pakistan to ban asbestos.

Currently, prevention remains the only cure for asbestos-caused diseases. We applaud the Ahmed family for raising asbestos awareness and ban asbestos efforts to protect the health of the public in Pakistan and across the globe and we are excited to welcome Mezab as a presenter at our 10th Annual Asbestos Awareness Conference. Stay tuned for more details about Pakistan’s Ban Asbestos Conference to come.