Skip to content
Home/ARBAN, Blog, Legislative/The Alan Reinstein Ban Asbestos Now Act to be Marked Up in Committee on Energy and Commerce U.S. House of Representatives

The Alan Reinstein Ban Asbestos Now Act to be Marked Up in Committee on Energy and Commerce U.S. House of Representatives

This blog is dedicated in loving memory of our dear friend and colleague, Ann Strickland, who worked to uphold the laws and regulations enacted to protect public health and our environment. 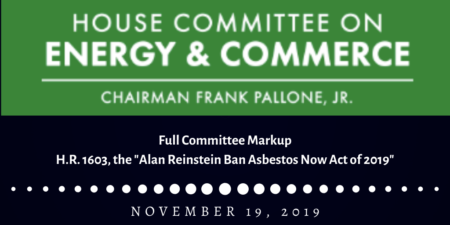 We are excited to announce that the bicameral Alan Reinstein Ban Asbestos Now Act of 2019 (ARBAN) (H.R. 1603) will be marked up on Tuesday, November 19 by the Committee on Energy and Commerce. We are one of 18 bills that will be marked up that day. Supporters of ARBAN will be able to watch the event live.

Chairman Frank Pallone wrote a memo explaining all the bills to be marked up, which can be found here. As of now, we are listed as number five of 18 bills, but that could change.

Asbestos is a known carcinogen and has no safe level of exposure. Nearly 40,000 Americans die from asbestos-related illnesses every year, including mesothelioma, lung cancer, and asbestosis. Despite this, asbestos remains legal and lethal in the United States. The U.S. is the only western industrialized nation to have not yet banned asbestos. The Alan Reinstein Ban Asbestos Now Act of 2019 will ban asbestos imports and use, with no loopholes or exemptions.

ADAO will continue to press Congress to act and ban asbestos in America to protect public health from this deadly threat.

Together, we make change possible.