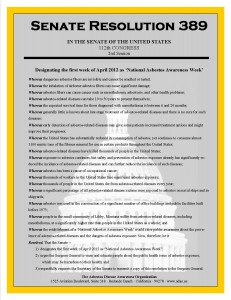 “ADAO applauds the U.S. Senate for unanimously passing S. Res. 389, recognizing the first week of April as National Asbestos Awareness Week,” said Linda Reinstein, President and Co-founder of the Asbestos Disease Awareness Organization. “However, it is shocking and unacceptable that the United States continues to endanger public health by importing 1,100 metric tons of chrysotile asbestos. The USGS reported that, ‘The United States is dependent on imports to meet manufacturing needs.’ I am especially concerned about workers exposed to asbestos during renovations, natural disasters, and construction. The President’s Cancer Panel reported, ‘construction workers are 11 times more likely to develop mesothelioma due to asbestos exposure at the site.’ ADAO will continue to work with Congress to prevent asbestos exposure to eliminate deadly asbestos-caused diseases. Every life lost to a preventable asbestos-caused disease is tragic; hundreds of thousands of lives lost is unconscionable.”

“It is with gratitude that I congratulate Senator Baucus and his co-sponsors for their leadership in recognizing the devastating effects that asbestos has brought upon this Nation by designating the first week of April as Asbestos Awareness Week,” said Dr. Richard A. Lemen, ADAO Science Advisory Co-Chair. “Continued leadership by the Senate is needed to resolve the still pending issues related from exposure to asbestos. It is my hope that asbestos usage in this country will soon be stopped as it now has in over 50 other countries throughout the world.”

Asbestos is a known human carcinogen and exposure can cause mesothelioma and lung, gastrointestinal, laryngeal, and ovarian cancers, as well as non-malignant lung and pleural disorders. The World Health Organization estimates that 107,000 workers around the world will die each year of an asbestos-related disease, equaling 300 deaths per day.

Asbestos Disease Awareness Organization (ADAO) was founded by asbestos victims and their families in 2004. ADAO seeks to give asbestos victims and concerned citizens a united voice to raise public awareness about the dangers of asbestos exposure. ADAO is an independent global organization dedicated to preventing asbestos-related diseases through education, advocacy, and community. For more information, visit www.asbestosdiseaseawareness.org.