Skip to content
Home/Blog/“The asbestos issue is not a thing of the past. It continues to this day.” ~ Acting U.S. Surgeon General Boris Lushniak

“The asbestos issue is not a thing of the past. It continues to this day.” ~ Acting U.S. Surgeon General Boris Lushniak 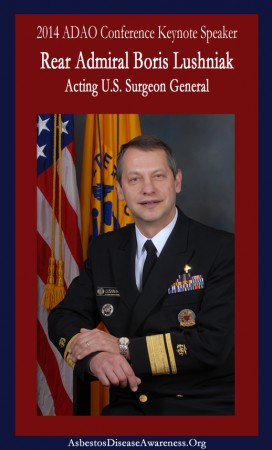 would have turned 30 on August 7, 2014, but he lost his battle with mesothelioma several months ago. We miss him. In his memory, the Asbestos Disease Awareness Organization (ADAO) is sharing our April 5, 2014 interview with Acting Surgeon General Boris Lushniak in which he gave this powerful message to the Bradley family:

“You have a hero amongst you. You have a person who didn’t remain silent, who, although affected by this exposure, affected by the diseases that come with this exposure, as opposed to just going to the wayside, came out and became a fighter.  To the whole Bradley family, job well done in raising him to be a fighter. Job well done in terms of having him as an activist to have that impact. Sometimes we think words like this just sort of fade away. They never fade away.  There are always repercussions. They will touch people. And it’s important that we have people like Michael.”

At ADAO we know many other Meso Warriors like Michael and we thank all of you for your strong united voice for a world free from asbestos. Dr. Lushniak thanks you too:

ADAO would like to thank the Office of the US Surgeon General for the important Statements they have made for National Asbestos Awareness in 2014, 2013 and 2009.

On behalf of all of us at ADAO, thank you, Dr. Lushniak.