The Trump EPA issued its Risk Evaluation for Asbestos Part I: Chrysotile Asbestos on December 30, 2020. This “Part 1” evaluation only addressed certain conditions of use involving chrysotile asbestos. ADAO filed a petition for review of the evaluation with the 9th Circuit on January 26th because of EPA’s failure to consider the risks of other asbestos fibers, conditions of use, health effects and pathways of exposure that impact public health. We also are c 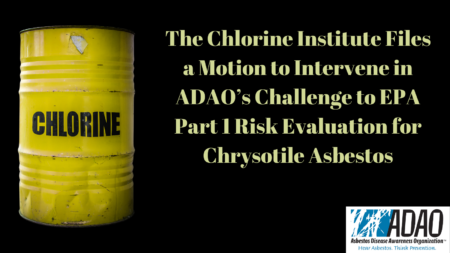 oncerned that EPA found that some of the chrysotile asbestos conditions of use did not present unreasonable risks of injury.

The Part I evaluation concludes that “Commercial chrysotile asbestos uses for which EPA found unreasonable risk to workers include chlor-alkali diaphragms” used to make chlorine and caustic soda. ADAO supports these findings and believes EPA must ban the use of chrysotile asbestos in chlor-alkali manufacturing in its upcoming TSCA risk management rulemaking.

We call on the Chlorine Institute and its members to accept EPA’s unreasonable risk determinations for their operations and to agree to convert plants using asbestos diaphragms to non-asbestos processes.

According to the U.S. Geological Survey (USGS) the chlor-alkali industry “has accounted for 100% of asbestos consumption since at least 2016.” The USGS report states, “The chloralkali industry is the only remaining domestic consumer of asbestos in mineral form.”

World-wide and in the US, most production of chlorine and caustic soda occurs in plants that use the non-asbestos membrane process. In 2014, the European Commission released a technical report, Best Available Techniques (BAT) Reference Document for the Production of Chlor-alkali, which concluded that membrane plants have significant economic advantages over diaphragms, including “low total energy consumption, low investment and operating costs.” In addition, with energy savings of over 20 percent compared to asbestos diaphragms, membrane plants can quickly recoup capital conversion costs.

According to a Chlorine Chemistry Division 2020 document, Olin and Occidental Chemical Corporation (OxyChem) only have ten plants now, which are located in Alabama, Arkansas, Kansas, Louisiana, New York, and Texas, using chrysotile asbestos diaphragms. This is proof that the industry as a whole is far down the road of transitioning to non-asbestos technology. The remaining plants can transition too — they just don’t want to.

The facts are irrefutable. Asbestos, a known carcinogen, continues to kill over 40,000 Americans each year and represents one of the largest preventable health threats that our population faces. Without a ban, the US continues to import and use asbestos. Nearly 70 other countries have banned asbestos and/or use remain largely restricted. Additional information can be found in ADAO’s “EPA’s Failure to Ban Asbestos: The Impact from 1989 – 2019 on Public Health, Environment, and the Economy” Report.

While we continue our legal battle against EPA, we also urge Congress to re-introduce the Alan Reinstein Ban Asbestos Now Act, which included a 10-year transition plan the Chlor-Alkali industry had supported in 2019.

Americans deserve to have their air, soil, and water free from toxic asbestos. Enough.