There are just over 70 days left for the 116th Congress to pass the Alan Reinstein Ban Asbestos Now (ARBAN) Act — the most comprehensive asbestos ban legislation put before Congress in 30 years. Although ARBAN passed out of the House Committee on Energy and Commerce one year ago with overwhelming bipartisan support, yet the bill has not yet been voted on in the House.

Every American deserves to go to work in a safe building without the threat of asbestos exposure. While the make-up of the new Senate and House are uncertain, Members are back in Washington, D.C. for the important Lame Duck Session. 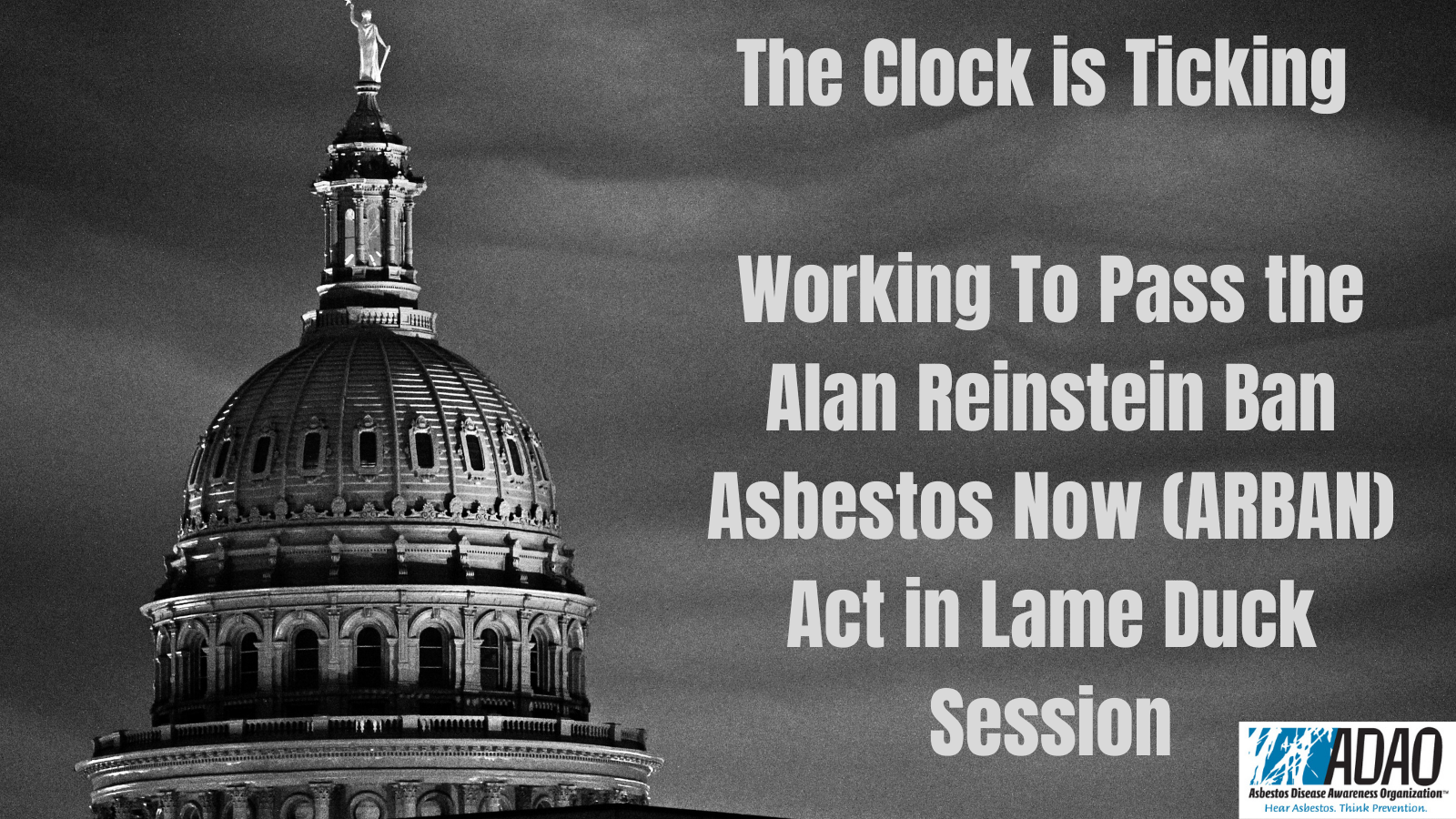 Clearly, ARBAN being passed and enacted this Congress is what’s best for American workers and families.

Put simply, this legislation will save lives. It will ban a toxic chemical more than 70 countries around the world have already restricted and it will provide local authorities and communities with critical information they need to keep themselves safe from disaster.

The momentum for ARBAN is strong. Numerous stakeholders have repeatedly shown their unwavering support to the U.S. House of Representatives. Most recently, in a September 28th letter, the International Association of Fire Fighters’ stated, ‘Every day across America, firefighters rush into burning buildings to save lives and limit property loss. As a result, firefighters experience a higher risk of unsafe exposure to asbestos compared to the general population.’

As AFL-CIO stated in their September 29th letter, “Working people have the right to a safe job, including protections from toxic substances. A ban on new asbestos and an assessment of the risks of in-place asbestos are crucial to prevent disease and protect our nation’s workers’ lives and livelihoods.”

Congress must act because the EPA has failed to do what Congress tasked them to do under the 2016 Lautenberg Chemical Safety Act (LCSA). Asbestos was often invoked when Congress empowered EPA to take more aggressive action on toxic chemicals, and yet, this EPA has repeatedly failed to do so in a meaningful way. The EPA Draft Risk Evaluation of Asbestos is a perfect example of this failure — as it was deemed inadequate and unacceptable, according to the EPA’s own TSCA Science Advisory Committee on Chemicals Report.

If Congress doesn’t pass ARBAN this year, we will have to start at square one in 2021, with hearings and committee votes– an unnecessary delay after so much work and cooperation has gone into writing a bill that Members from both sides of the aisle have come to support. While a Biden EPA is likely to be more diligent in their efforts to ban toxic chemicals like asbestos, the process will take 6-7 years to complete– putting more Americans at risk from asbestos exposure. During those years, an estimated 1,200 metric tons of raw asbestos would be to be imported and used across the country.

We hope that this current Congress can reconcile any remaining issues of concern and pass ARBAN out of the House so it can move to the Senate and finally, be signed into law. The time is truly now, as our lives depend on legislation to eliminate this toxin in our homes, schools, workplaces, and our environment.