The Asbestos Disease Awareness Organization (ADAO) is honored to present Tony’s Story in recognition of International Workers’ Memorial Day, held on April 28 each year. Our sincere thanks to Tony’s family and to Rory O’Neill of Hazards Magazine for helping our global family remember the loved ones we have lost. We have been touched by asbestos in individual ways, yet we are joined together by a bond of community.

This week, we would like to honor the story of Tony, as shared by his family members Maitea Lovric, Lisa Zanatta, and Peter Medina. 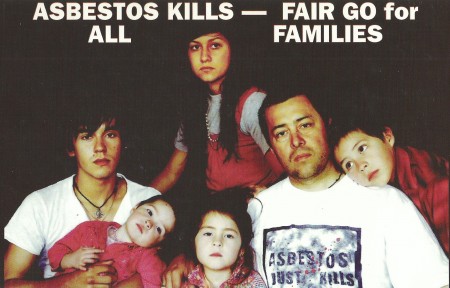 How has asbestos changed your life? We are grateful for the opportunity to share something of Tony Medina’s story with the Asbestos Disease Awareness Organization.  This International Workers’ Memorial Day (Jetaime Medina, Tony’s daughter, is pictured on the Hazards magazine Workers’ Memorial Day page) will mark five and a half years since Tony’s passing.  In 2008 he succumbed after a long hard fought battle to mesothelioma, he was 43 years of age and left behind 5 devastated young children, wife, family, friends and colleagues.

Maitea Lovric, Lisa Zanatta, and Peter Medina: “Tony was a construction worker, OH&S officer, activist and community leader.  Tony’s family migrated from Chile in 1977 post the military coup and military dictatorship, he often mentioned this period as being a formative one in developing his social awareness.

One of his early jobs as a young man of 19 years of age was as an asbestos removalist and although he did this work for less than 12 months it was this early exposure to asbestos that would tragically claim his life to mesothelioma, a fatal asbestos related cancer two decades later.

Tony through his membership with the CFMEU (construction, forestry mining and energy union, formerly the BWIU) and as an organiser and OH&S rep lobbied hard along with other activists for industry changes to be made to the safe removal of asbestos code, striving for a “no safe level of exposure to asbestos” policy in the building industry. He was also an advocate for strong OH&S laws and the harmonising of these laws Australia wide and for employers to be legally accountable for worker deaths due to negligent work practices, these goals were achieved through strong and at times militant union action, something Tony was a believer in if necessary.

Tony volunteered his time to the CFMEU as a trainer in the training unit, instructing construction workers and industry stakeholders in the safe removal of asbestos course.

Post his diagnosis of mesothelioma Tony along with activists travelled interstate to lobby Government and opposition ministers for the chemotherapy drug Alimta to be made available on the pharmaceutics benefit scheme, as the cost of this drug was beyond the financial means of most Australian asbestos sufferers.  The media campaign also took the form of a photo postcard petition depicting Tony and his children and the devastating consequences that this disease would have on them as a family.  The campaign was successful and in 2008 was made available on the pharmaceuticals benefit scheme.

Tony was awarded a lifetime membership to the CFMEU in December 2008 for his tireless activism in the continual improvement of OH&S laws in and around building and construction industries.  He’s story can also be seen in the Immigration Museums archives.  His story is also told in Donna Jackson thought provoking and entertaining theatre production DUST based on asbestos and it’s impact on our culture.

Tony’s activism was not only limited to the building industry, he was a passionate humanist that saw him study in the former Soviet Union and participate in the rebuilding efforts of East Timor post the UN withdrawal.  He was also a well known and respected community leader of the Australian Chilean community, he also derived great pleasure as a soccer coach in seeing his Endeavour Hills under 14’s boys soccer team win the Premiership even as his body was ravaged by mesothelioma.

Tony’s infectious humour and charm coupled with a deep passion for people of all walks of life will ensure he will always be remembered for his inspiring ideals to improving people’s lives.  He continues to be remembered and mourned by family, friends and colleagues.”