The Irrefutable Fact: Over 40,000 American Workers Died from Preventable Asbestos-Caused Diseases in 2019 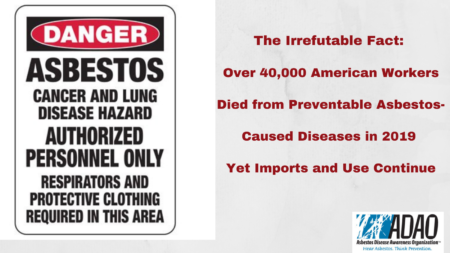 For years, there has been confusion on how many deaths are caused by asbestos exposure in the United States. ADAO regularly states that asbestos causes “nearly 40,000 annual deaths” based on rigorous studies and research, and below, we give a brief history of the data that has led us to this decision.

The first clinically recorded case of an asbestos-induced lung disease was recorded over 100 years ago, in 1906. Dr. Murray diagnosed a 33-year old man who had worked in an asbestos textile plant for 14 years with asbestosis. Since this original diagnosis, physicians and researchers established that asbestos exposure causes multiple potentially-fatal diseases including asbestosis, mesothelioma, and cancers of the lung, larynx and ovaries.

Since then, it has been well-established that asbestos is a known carcinogen. According to the World Health Organization (WHO), “All types of asbestos cause lung cancer, mesothelioma, cancer of the larynx and ovary, and asbestosis (fibrosis of the lungs). Exposure to asbestos occurs through inhalation of fibers in the air, in the working environment, ambient air in the vicinity of point sources such as factories handling asbestos, or indoor air in housing and buildings containing friable (crumbly) asbestos materials.”

However, risk estimates were not put in place by EPA and OSHA until 1980, following a Supreme Court decision and a paper by three scientists, Bill Nicholson, George Perkel and Irving Selikoff. Decades later, in 2004, the Environmental Working Group (EWG) published an article that estimated 10,000 Americans die each year from asbestos-caused illnesses. That number was upgraded by EWG to 12,000 to 15,000 deaths each year.

That number has now been disproven. The International Commission of Occupational Health (ICOH) published an article in 2018 that showed a sharp increase in asbestos-related deaths. ICOH’s data and research showed asbestos-related diseases cause 39,275 deaths in the United States annually, more than double the previous estimates of 15,000 per year. The study showed asbestos leads to “34,270 lung cancer deaths, 3,161 mesothelioma deaths, 787 ovarian cancer deaths, 443 larynx cancer deaths and 613 chronic asbestosis deaths.”

The Institute for Health Metrics and Evaluation (IHME), an independent global health research center at the University of Washington, was the first organization to comprehensively compile statistics on deaths from asbestos-caused lung cancer, mesothelioma, ovarian cancer, larynx cancer, and chronic asbestosis. According to the IHME database, 40,764 American workers died from asbestos-caused diseases in 2019.

The century old science is abundantly clear.  Asbestos is a human carcinogen and there is no safe or controlled use. It is time to ban asbestos once and for all, and put an end to the suffering felt by families across the United States. The Alan Reinstein Ban Asbestos Now (ARBAN) Act is the most comprehensive asbestos-ban bill put before Congress in 30 years. We urge Congress to pass the bill now and start saving lives immediately.