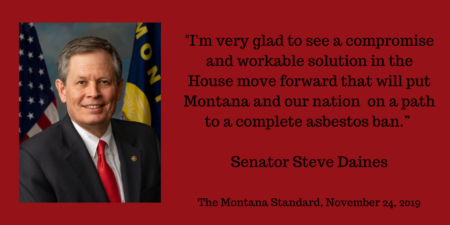 The Asbestos Disease Awareness Organization is thrilled to  read in The Montana Standard hear that Senator Steve Daines (R-MO) has become the Republican in the Senate to join forces with Senator Jeff Merkley (D-OR) in support of the Alan Reinstein Ban Asbestos Now Act of 2019 (Sen. 717).

We commend Senator Daines for reaching across the aisle in order to pass a bill that will protect the public health of his constituents and American citizens around the nation. In today’s climate, one filled with political fatigue, Senators Daines and Merkley show that we still have a great opportunity to come together and pass necessary laws.

This comprehensive legislation will not only ban all asbestos imports and use, but will also require increased transparency from the asbestos industry, and mandate a study of all asbestos that is already present in American homes and buildings. ADAO is incredibly grateful to all that Senator Merkley has done in pushing this bill forward, and we know that we can only see more bipartisan support of ARBAN now that Senator Daines has created a pathway for other Republicans to follow.

This bipartisan support would reflect the support shown in the U.S. House of Representatives. ARBAN recently passed out of the Committee on Energy and Commerce with a bipartisan vote of 47-1. Senator Daines support is a clear indication of the work done by Committee Chairman Frank Pallone (D-NJ), Ranking Member Greg Walden (R-OR), Subcommittee Chairman Paul Tonko (D-NY), and Ranking Member John Shimkus (R-IL), along with Representative Suzanne Bonamici, and many others. The progress made in the House is clearly carrying over to the Senate, and for that, we are grateful.

ADAO again appreciates the support shown by Senator Daines and the continued effort put forth by Senator Merkley. We look forward to more Republicans joining the fight against asbestos, a known carcinogen that kills 40,000 Americans every year. The time to prevent asbestos-related illness and death is now. Together, we can make a difference.