“The Search for Treatment” – Tamblea’s Story

This week, we would like to honor the story of Tamblea, who is a part of our ADAO family.

“The Search For Treatment” – Tamblea’s Story 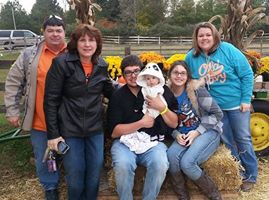 Tammy Frank and her husband Mike are two young entrepreneurs from Acworth, Georgia who have been married for fourteen years and are the proud parents of two wonderful children, Jacqueline who is 13 and George, age 10. They are a tightly-knit family who at one time enjoyed camping and trips to the ocean. They are also a family with deep religious beliefs, which at this time is very crucial to their current situation. You see, Tammy was diagnosed with peritoneal mesothelioma in November of 2000.

It all began in January 1999, when Tammy began to experience severe abdominal pains that subsequently lead her to the local emergency room on two separate occasions. However, it wasn’t until November 2000 when she again sought medical attention for the same pain that her physician discovered she had what was thought to be an ovarian cyst. Tammy was referred to a gynecologist whom she saw the next day. The gynecologist told Tammy she needed to have surgery immediately. On November 21, 2000, Tammy was to undergo a diagnostic laparoscopy, but when they attempted entry through her naval, they immediately discovered: omental adhesions to the anterior abdominal wall, all the way from the umbilicus into the pelvis. She had extensive scar tissue down in the pelvis which required a laparotomy in order to dissect the tubes and ovaries off the colon. The right ovary had some small excrescences on it. The tube on that side was adhered to the ovary. Both of these were adhered to the colon. She had a large left hydrosalpinx which was also stuck to her colon. What began as a minor procedure immediately turned into a full-blown invasive surgery to remove pelvic mass, rupture and clean adhesions attached throughout her pelvis and colon, and dissect her fallopian tubes and ovaries off the colon. Six specimens were taken and sent to the Mayo Clinic Pathology. Each specimen revealed Tammy Frank had Malignant Mesothelioma of Epithelial Type. The horror of hearing her diagnosis was only matched by what was next revealed.

THE SEARCH FOR TREATMENT

Tammy’s doctor was unable to locate a physician in the entire state of Georgia who specialized in the treatment of mesothelioma so she was referred to a doctor at the Southeastern Oncology and Gynecology in Atlanta. He is treating Tammy as though she has ovarian cancer. He told her she was lucky they had caught her mesothelioma in its early stage and that her chances for survival were good. Tammy began chemotherapy treatments in December which consisted of paclitaxel (Taxol) combined with Carboplatin and administered once every three weeks. She experienced hair loss, nausea, vomiting and weight loss of 20 pounds. In January 2000, Tammy underwent another explorative procedure using a scope to determine whether the chemotherapy was working. It was then they found mesothelium on the liver, skin lining and her large intestine. The procedure was followed by three more chemotherapy treatments through a port she had installed in February.