Medium Guest Blog Post: The Tangled And Deadly Truth about Asbestos — EPA Allows Imports and Use to Continue:

Most Americans think asbestos is an old story — but they are wrong. Dead wrong.

Each year, nearly 40,000 Americans die from preventable asbestos-caused disease. As families care for or bury their loved ones, the Environmental Protection Agency (EPA) allows for imports and use to continue.

A few weeks ago, two former EPA Administrators came together to call out the EPA’s inability to protect Americans from a known carcinogen. Gina McCarthy (appointed by Barack Obama in 2013) and William K. Reilly (appointed by George H.W. Bush in 1989) joined forces last month to voice their support for The Alan Reinstein Ban Asbestos Now Act of 2019 with an op-ed in The New York Times. 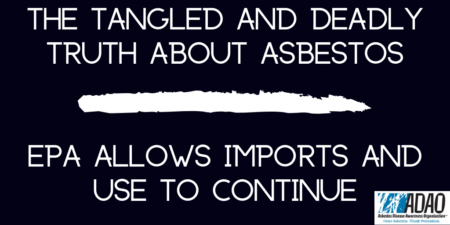 These environmental leaders, who both fought to protect Americans from asbestos during their tenure, lambasted the EPA’s inaction. This prompted current EPA Administrator, Andrew Wheeler, to respond that Americans need to wait to ban asbestos until the EPA evaluates the risk of remaining asbestos uses. Wheeler was not the only member of Trump’s EPA quickly criticize McCarthy and Reilly. Alexandra Dunn, Assistant Administrator for the Office of Chemical Safety and Pollution Prevention, also wrote a defense on EPA’s blog. In her post, Dunn also defends the evaluations Wheeler references, saying that under the Toxic Substances Control Act (TSCA) the EPA cannot just ban asbestos.

Wheeler and Dunn are wrong. Not only is it damaging — and deadly — to wait, but Congress can legally bass an all-out ban by passing ARBAN. ARBAN will amend TSCA by adding a new subsection to section 6, which authorizes regulation of unsafe chemical substances.

Most importantly, we have been waiting on these evaluations for 30 years, and we cannot wait any longer. Congress empowered the EPA to act in 2016 with historic and bipartisan revisions to the TSCA. After Congress passed this landmark legislation, President Barack Obama’s EPA selected asbestos as one among the first 10 chemicals to be evaluated and reviewed. This move was praised as the way the agency would finally ban asbestos for good. But since then, Trump’s EPA has done everything in its power to slow regulation to a halt.

We have known about the links between asbestos, mesothelioma and other cancers since the 1960s. Since 1989, over one million people have died from asbestos-related diseases, according to government data that likely underreports these deaths. Another million people shouldn’t have to suffer while the EPA evaluates this deadly carcinogen.

Time and time again, the EPA has failed us. In 1989, the EPA attempted to ban asbestos in all forms. Two years later, the asbestos industry fought hard and challenged the EPA in court. Private profits prevailed over public health and the ban was overturned.

Since then, nearly 70 other countries have banned asbestos. Yet, in America asbestos remains legal and lethal. In fact, according to informal surveys nationwide, a majority of Americans believe that the fiber has already been banned, a falsehood that only serves the industry who profits from this poison.

We can’t wait for the EPA to do their job. Without a ban, these imports will continue.

Donald Trump’s EPA is stocked with political appointees who have significant conflicts of interest to the asbestos industry. Nancy Beck, the Deputy Assistant Administrator for Chemical Safety and Pollution Prevention (the department in charge of regulating toxins) was formerly Senior Director for Regulatory Science Policy at the American Chemistry Council (ACC). When she was promoted to serve in the White House, she was replaced by David Fischer who was also from the American Chemical Council. Clearly, another appointment with a clear conflict of interest and bias towards asbestos imports and use.

These industry insiders have worked to slow regulation and put out a series of misleading statements about their work — like claiming a new rule was the equivalent of a ban — a move widely slammed by environmental and public health advocates who know better.

This is why we do not trust that the EPA will do its job — either with the evaluations or with a proper ban. It’s also why Congress must act.

The bipartisan ARBAN will ban the importation, manufacture, processing, and distribution of all six forms of asbestos (chrysotile, actinolite, amosite, anthophyllite, crocidolite, and tremolite) and the Libby Amphibole (richterite and winchite).

The ban will apply to products containing asbestos as an impurity. The bill will result in the phase-out of asbestos by the chlor-alkali industry, currently the sole importer of asbestos into the United States.

It will also require Right-to-Know asbestos reporting and a comprehensive study of legacy asbestos in public buildings so Americans can protect themselves from this lethal substance.

ARBAN is the most comprehensive asbestos ban bill ever to be put in front of Congress. It will have resounding benefits for public health across the board. Congress must act and pass ARBAN and ban asbestos once and for all, no loopholes, no exceptions. There is no time to wait.