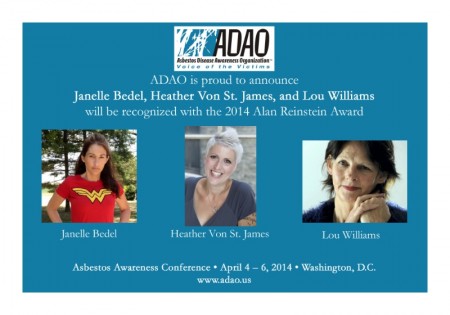 The Asbestos Disease Awareness Organization (ADAO) is proud to announce that, for the first time, three honorees will receive the Alan Reinstein Award at the Asbestos Awareness Conference in 2014. The award, named for my late husband and the first President of ADAO, recognizes these individuals’ commitment to education, advocacy and support to countless patients and families around the world. We believe that honoring three of our Meso Warriors celebrates the tremendous growth of ADAO and the impact of patients’ powerful voices. When Alan first became ill, we had no one to turn to; now, there are so many committed to a world free from asbestos. 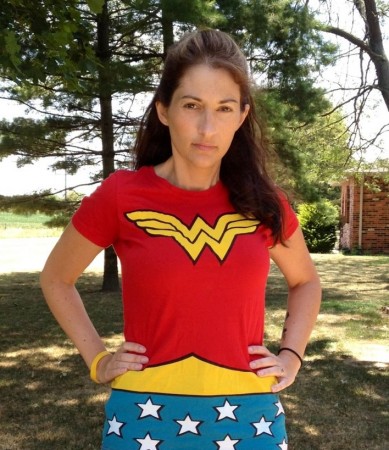 Janelle Bedel.
Janelle’s courage and perseverance earned her the nickname “Wonder Woman.”  She was an inspiration to our community and supported fellow Meso Warriors around the world.  Janelle organized a Miles for Meso fundraiser run/walk in 2012 in her town of Rushville, Indiana. Her story was featured in the Rushville Republican and on the ADAO website including “Janelle’s Mesothelioma Journey.”  Janelle produced videos to spread awareness about the harsh realities of her disease. “I hope this video will show people we’re not statistics, we’re real people,” she wrote. Her spirit shined through in her story “I Will Never Be the Same Again”: “I just try to continue to improve my life every day. … There have been a lot of hard days, but the ones in between are really great!” On June 18, ADAO had the honor of presenting Janelle’s award to her at her bedside. She passed away on June 19. Her husband and son, Andrew and Carson, will attend the ADAO conference to accept the award in her memory. 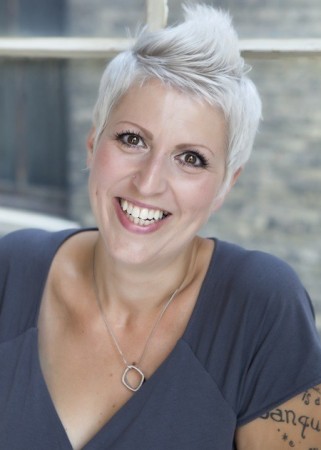 Heather von St. James. Heather had a lung removed in 2006 when her daughter was only a few months old.  Her fears were overwhelming. Would she live to see her child grow up? On the first anniversary of her surgery, she and her husband started Lungleavin’ Day, a day to let go of our fears and resolve to live life to the fullest. Heather and her husband host this day in their home every year, where people write their fears on a plate and throw their plates in the fire. In 2013, Lungleavin Day was expanded by webcast to Mesothelioma Warriors around the world. Heather told her story, The Value of my Life in Dollars and Tears, on the ADAO website and has also been a speaker at our conference. She is a strong advocate for the International Mesothelioma Program and Dr. David Sugarbaker’s work, as well as ADAO. She and her husband blog for the Mesothelioma Cancer Alliance. Heather’s goal is to bring hope to mesothelioma patients and awareness regarding the disease. 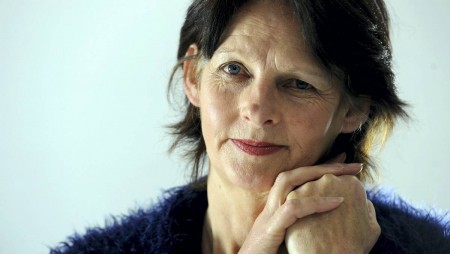 Lou Williams. Lou’s courage and perseverance throughout her illness are an inspiration to many, and her powerful story — “I Will Not Die in Vain” — is featured on the ADAO website. From Australia, she is a shining example of how our online community supports each other all over the world. “Sending a beautiful rainbow of love, strength and hope to everyone,” she said in a Facebook posting. The ADAO community is deeply moved by her dedication to supporting fellow Meso Warriors.  Lou has served on boards of asbestos organizations since 2003 and is the Information and Awareness Officer with the Bernie Banton Foundation and actively blogs about living with mesothelioma. “Every day I live for the moment, as that is all we all have!” Lou writes. “I believe I have a purpose in life and that is to raise asbestos awareness and if by doing so it saves even one life from this terrible cancer then I will be pleased and will not die in vain!”

My deepest gratitude to Janelle, Heather, Lou and their families for their dedication to helping Meso Warriors around the world.