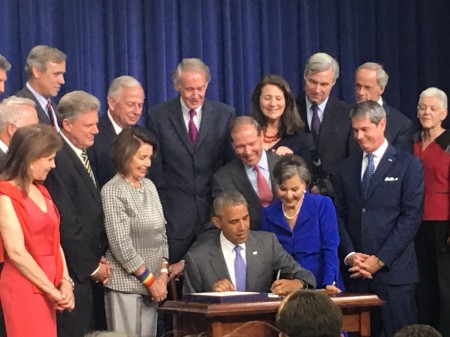 Last week, ADAO reached a milestone in a journey more than six years in the making. As most of you already know, on June 22 President Obama signed into law The Frank R. Lautenberg Chemical Safety for the 21st Century Act, marking a landmark step forward toward banning asbestos in the United States.

During the White House signing ceremony, President Obama explained why the new law is needed:

“…the system was so complex, so burdensome that our country hasn’t even been able to uphold a ban on asbestos –a known carcinogen that kills as many as 10,000 Americans every year. I think a lot of Americans would be shocked by that.”

At the request of Sen. Barbara Barbara Boxer, who relentlessly fought for ADAO’s push for Toxic Substances Control Act (TSCA) negotiation throughout the years, Emily and I were honored to represent the asbestos advocate community at the presidential signing of this monumental bill. It was the most unforgettable experience, beyond any achievement Doug Larkin and I could have ever imagined when we co-founded ADAO 12 years ago. In his remarks before signing, President Obama called out asbestos, describing it as “a known carcinogen that kills as many as 10,000 Americans every year.” This is the first time any sitting president has publicly acknowledged the deadly nature of this awful chemical, and I know I speak for the whole ADAO community when I say this meant the world to us.

ADAO owes a deep debt of gratitude to the many members of Congress who fought so hard to improve TSCA and protect public health. We would be remiss to not also extend sincere thanks to every Congressional staffer and volunteer who helped push this bill through to fruition. We are especially grateful to Sen. Barbara Boxer, who has been ADAO’s strongest champion, for ensuring TSCA reform would prioritize asbestos.

This new legislation reforms the U.S.’s badly broken, 40-year-old Toxic Substances Control Act from 1976. The old TSCA severely limited the regulatory scope of the Environmental Protection Agency (EPA), to the point where the agency was unable to successfully ban asbestos.

For us, the 2016 TSCA reform eliminates two significant obstacles from the 1976 TSCA that endangered public health and our environment:

Under this new legislation, the EPA is empowered to ban and regulate chemicals that are “toxic, persistent, and bioaccumulative,” like asbestos, without concern for industry cost or any other non-risk factor.

As EPA Administrator Gina McCarthy said, “this law is a huge win for public health, and EPA is eager to get to work.”

Although this is time to celebrate, our work continues to raise awareness, strengthen prevention, and stop asbestos imports for once and for all.  ADAO will remain a stakeholder at the table and vigilantly work to ensure the EPA expeditiously takes regulatory action that results in a full asbestos ban. While at the signing ceremony, Emily and I connected with 25 members of Congress and many fellow stakeholders to begin scheduling meetings to work on the next steps of TSCA implementation. ADAO will be hosting our 10th Congressional staff briefing in the coming months to get the ball rolling and focus the fight on asbestos.

It may have taken us six years to get to this point, and it is absolutely a hard-earned victory, but it is truly just the beginning of using TSCA to ban asbestos. President Obama’s mention of asbestos ahead of the signing, as well as Sen. Boxer’s mention of it in a recent Senate floor speech is proof  that our voices were heard. However, the ADAO community must stay active and engaged to make sure Congress continues to hear our message–that’s where you all come in. Share your stories with ADAO, and keep spreading the word and sharing ADAO’s content on social media. The power of your social sharing skills is a force to be reckoned with, and here’s the proof:

Your social sharing also helps to point the media in our direction, which extends the reach of ADAO’s message even further. So far, we’ve been mentioned in articles in Bloomberg BNA, Cold Truth, Science Blogs, The San Francisco Chronicle, SF Gate, and several others.

This victory makes it clear—the hard work you’ve all dedicated to ADAO truly IS making a difference, and helping to make America safer for everyone. Each and every one of you is a hero for this. Together, lets continue fighting the good fight until no one has to know the asbestos-caused suffering we’ve known.

In unity and in victory,