Skip to content
Home/Blog/Two Earl Dotter Exhibits to be shown at the University of Texas Health Science Center at Tyler, TX

Two Earl Dotter Exhibits to be shown at the University of Texas Health Science Center at Tyler, TX 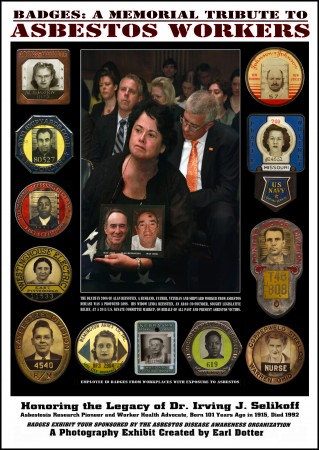 I am honored to have my exhibits, BADGES: A Memorial Tribute to Asbestos Workers and LIFE’S WORK: A Fifty Year Photographic Chronicle of Working in the U.S.A. presented at the University of Texas Health Science Center at Tyler for the Emerging Issues on Occupational and Environmental Health 2016 Conference on June 17th and at the Occupational Medicine Residency Commencement the same evening. Prior to those dates my exhibits will be open to the public at the university in Tyler, Texas on Tuesday June 14th through Thursday June 16th, from 9 am until 5 pm. The campus address is at 741 G building with the exhibits located in the front of the Health Science Center building. There is campus parking in Lot A-1, A-2, A-3 and A-4. The full address of the campus is: 11937 U.S. Highway 271 North, Tyler, TX 75708.

The general public, the family of asbestos insulator plaintiff, Clarence Borel, local members of the Heat and Frost Insulators Union and members of the Asbestos Disease Awareness Organization (ADAO) will be attending the exhibits at the University Texas Health Science Center in Tyler. This will be the 10th showing of the BADGES exhibit since its premier at the Asbestos Disease Awareness Conference (ADAO) in 2015.

The photographs in my BADGES and LIFE’S WORK exhibits presented at the University of Texas Health Science Center at Tyler are the culmination of my 50 years documenting hazardous occupations and show my own photographic documentation history leading up to the creation of the touring BADGES exhibit. 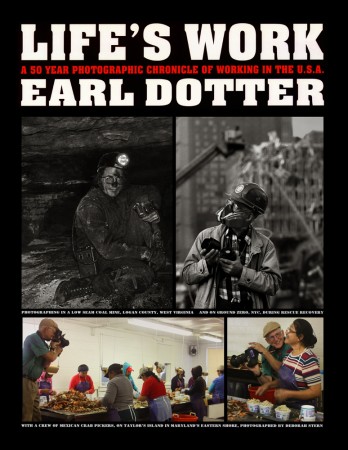 While in college I studied graphic design and advertising, which seemed to me, at the time, to be a practical artistic career path to pursue. As I graduated from San Jose State in 1967 my primary art instructor encouraged me to attend the School of Visual Arts (SVA) in Manhattan to be taught by successful art directors there. Most fortunately, my SVA photography instructor, Paul Elfenbein, required his students to only take photos that expressed their personal point of view. This requirement turned out to be particularly timely in 1968, the year that Martin Luther King and Bobby Kennedy were assassinated and the Farmington West Virginia Coal Mine exploded, killing 78 miners.

As a student photographer living in the Lower East Side of Manhattan then, I found myself focusing on my neighbors as subjects. It was the only place I could afford to live in the city (my tenement walkup cost $31.25 per month). This historic, colorful and dangerous impoverished area gave me the opportunity to connect with its many diverse residents as I roamed the streets with a camera in hand, using only a required 50mm lens on my 35mm camera that fostered close engagement and communication with my subjects.

With guidance from Photography Instructor, Paul Elfenbein, I soon was taking my Lower East Side photographs to leading magazine art directors and in short order I had two cover photographs in New York Magazine and another in the final issue of the Saturday Evening Post. My initial photography success in New York with the tragedies of 1986 convinced me to devote all my creative energy to socially useful photography. In 1969, I became a VISTA Volunteer in Appalachia, rubbing shoulders with coal miners who were performing what was then the most dangerous job in America. Also in 1969, in response to the Farmington Mine Disaster and an epidemic of black lung disease among coal miners, the Mine Safety and Health Administration and OSHA were established. A few years later the Environmental Protection Agency also began. The formation of these agencies coincided with the beginning of my professional photography career.

Since then, the occupational and environmental health community have given me five decades of productive opportunity to create deeply personal photographs of workers that demonstrate the common ground they share with our society. And to also show the occupational and environmental improvements and still existing challenges of the last half century.

Origins of the BADGES Exhibit

I am an avid collector of historical workplace photography and memorabilia that complements my own photographs of similar subjects. A few years ago I had several Photo Employee ID Badges in my collection of workers with dangerous jobs but then noticed I could purchase others on Ebay. It was not long before I noticed many of the badges I had acquired came from industrial settings where asbestos was mined, manufactured or installed at construction sites of all kinds. A bell went off when I had lunch with Barry Castleman toward the end of 2014. In 1990 I had photographed Dr. Irving Selikoff working at the Mt. Sinai Medical Center and as he presided at the Asbestos, The Third Wave Conference. Offhandedly I asked Barry when was Irving Selikoff’s birthday? Barry thought a moment and said, Irving was born in 1915, 100 years ago next year! Right then I said to Barry, I can create an asbestos related photo exhibit using my photo ID badges, historical material and my photographs. Then Barry called Phil Landrigan at Mt. Sinai Medical Center in NYC and Linda Reinstein at the Asbestos Disease Awareness Organization proposing my exhibit idea to them. A short while later Linda called to encourage me to develop the BADGES exhibit for the next ADAO Annual Meeting in 2015.

A Description of the BADGES Exhibit Panels

The photo ID badges personalize the industrial victims of asbestos exposure. These badges appealed to me because personalizing my subjects who work in hazardous occupations has always been a primary goal for me. And what is unique about the badges is they name the companies that exposed the worker pictured on each badge. Quite naturally, it is easier to care about someone you are acquainted with. Viewers see a more personal side of this public health tragedy as a result. The panels make use of historical photographs and memorabilia that convey just how pervasive exposure to asbestos has been since the 1930’s and also point to important figures like Dr. Selikoff, Clarence Borel and Paul Brodeur who have taken active steps to draw attention to the harm from asbestos exposure and use.

What is next for the BADGES Exhibit?

I am now reaching out to current victims of asbestos disease to show, with their assistance, the traumatic impact of asbestos related illnesses on their lives and family members. I seek to create a personal visual record that victims and the Asbestos Disease Awareness Organization can use in their work to finally ban asbestos use completely in the United States. I will include some of those photographs in the ever evolving BADGES exhibit, as its exhibit tour continues.