Skip to content
Home/Blog/U.S. Surgeon General Adams Tweets about the Health Dangers of Asbestos Exposure for National Asbestos Awareness Week to His 508,000 Followers

U.S. Surgeon General Adams Tweets about the Health Dangers of Asbestos Exposure for National Asbestos Awareness Week to His 508,000 Followers 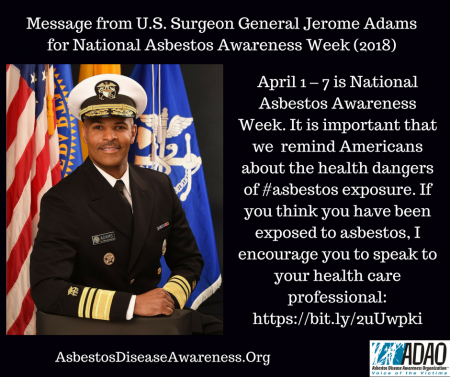 On behalf of the Asbestos Disease Awareness Organization (ADAO), an independent nonprofit working to eliminate asbestos-caused diseases through education, community, and advocacy, we would like to congratulate you on your new position. For fourteen years, we have worked with Congress to champion and secure legislation and resolutions to protect public health and our environment. We are pleased to share that on March 22, the U.S. Senate unanimously passed the 14th National Asbestos Awareness week resolution, designating April 1st through April 7th as a week of awareness. According to S. Res. 449, the Senate urges “the Surgeon General of the United States to warn and educate people about the public health issue of asbestos exposure, which may be hazardous to their health”. We would like to thank the Surgeon General, Honorable Vice Admiral Jerome M. Adams, M.D., M.P.H., for responding to the Senate’s request by tweeting and raising awareness about the dangers of asbestos to his 508,000 followers!

April 1 – 7 is National Asbestos Awareness Week. It is important that we remind Americans about the health dangers of #asbestos exposure. If you think you have been exposed to asbestos, I encourage you to speak to your health care professional: https://t.co/9ZLOd0ja7J

Many Americans mistakenly believe that the risk of asbestos exposure and related diseases is a concern of the past. To the contrary, a March 2017 report from the Center for Disease Control and Prevention indicated that the rate of asbestos caused deaths increased 4.8% between 1999-2015, despite a  significant decrease in asbestos usage over the past few decades.

There is a strong global consensus about the deadly nature of asbestos, as other developed countries such as Brazil and Canada have recently enacted a complete ban of asbestos with no exemptions.

Since 2009, the Office of the Surgeon General has issued five previous statements. Most recently, U.S. Surgeon General Dr. Vivek H. Murthy said, “National Asbestos Awareness Week is April 1-7 – a good time to remind Americans about the health dangers of asbestos exposure. Asbestos, a natural mineral fiber that is found in rock and soil, was widely used as insulation and fireproofing material in homes, commercial buildings, ships and other products, such as paints and car brakes. In recent years, asbestos use has decreased dramatically after it was linked to illnesses, including lung cancer, mesothelioma, and asbestosis.”

While Asbestos Awareness Week, as designated by Senate Resolution 449, has passed, an updated acknowledgement is important to enlighten the public that the risks associated with asbestos exposure still exist. It is especially crucial now, as the U.S. Environmental Protection Agency (EPA) is beginning to implement the newly reformed Toxic Substances Control Act (TSCA). As EPA Administrator Mr. Scott Pruitt and his team conduct evaluations of the first 10 TSCA prioritized chemicals, asbestos – which is among those 10 – remains present in homes, communities, and workplaces throughout the nation.

ADAO thanks Dr. Adams for his dedication to our country’s public health and for upholding the responsibility of the Office of the Surgeon General to advise Americans when they are at risk of harm and to protect them. We agree with his priority, that most of the nation’s pressing health problems can be prevented. While promising research continues, prevention remains the only cure for asbestos-caused disease.

Join the conversation with the Surgeon General and ADAO at @Surgeon_General and @Linda_ADAO and remember to use #2018GAAW!