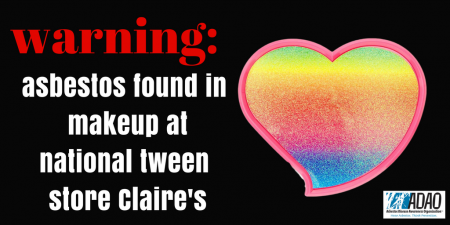 On December 29, 2017, it was announced that nine of Clarie’s products were contaminated with tremolite, chrysotile, and  anthophyllite asbestos. In July of 2017, another tween store named Justice had this same problem- asbestos was found in some of their products. Both Justice and Claire’s makeup were found to have talc, a mineral that forms in the earth with other minerals including asbestos. Although talc is commonly used in cosmetics, but the U.S. Food and Drug Administration (FDA) considers it unacceptable for cosmetic talc to be contaminated with asbestos.

The World Health Organization (WHO) states, “all forms of asbestos are carcinogenic to humans. Exposure to asbestos “causes cancer of the lung, larynx, and ovaries, and also mesothelioma (a cancer of the pleural and peritoneal linings). Asbestos exposure is also responsible for other diseases such as asbestosis (fibrosis of the lungs), and plaques, thickening and effusion in the pleura.”

It is unacceptable for our nations teens, tweens, and children to be exposed to this known carcinogen that remains lethal and legal. It is time we call on congress to support and pass The Alan Reinstein Ban Asbestos Know Act. This is yet again another example of how dangerous it is to allow asbestos to continue to be imported into the United States. It is time Congress to take action and put an end to this madness.