Skip to content
Home/Blog/What? Wait. Asbestos is a carcinogen so WHY would anyone STILL say that chrysotile asbestos is safe?

What? Wait. Asbestos is a carcinogen so WHY would anyone STILL say that chrysotile asbestos is safe? 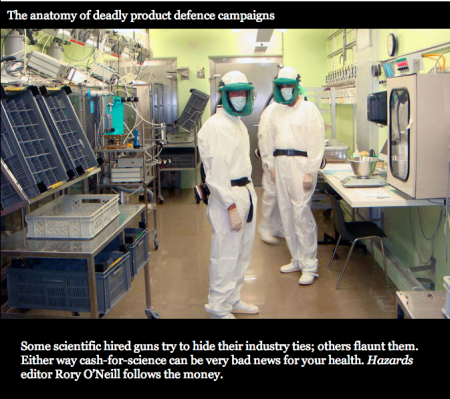 Study after study has proven that all forms of asbestos are human carcinogens and there is no safe level of exposure. The asbestos industry has paid for junk science to create doubt and confusion to continue peddling asbestos. It’s been called the ABC Defense: Anything But Chrysotile. It just isn’t true. Chrysotile is a scientifically-proven carcinogen. – Richard Lemen, PhD, MSPH, retired U.S. Assistant Surgeon General and Asbestos Disease Awareness Organization (ADAO) Science Advisory Board Co-Chair

It is chilling when a deadly double standard for public health and safety is as obvious as these two photos.

The first photo, according to Hazards magazine’s December 2013 article “The anatomy of deadly product defence campaigns,” shows the technicians in David M. Bernstein’s lab wearing their extensive protective gear as they study asbestos

According to the August 2014 Associated Press article Asbestos Pushed in Asia as Product for the Poor,  “In India, the world’s biggest asbestos importer, it’s a $2 billion industry with double-digit annual growth, at least 100 manufacturing plants and some 300,000 jobs.”  The second photo from the AP article shows a junkyard of broken pieces of materials made from asbestos, in Bihar, India, out in the open, where fibers can easily blow in the wind. When it is broken, asbestos is very dangerous. Deadly fibers can easily be dislodged. 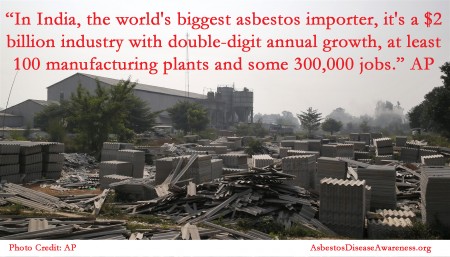 “The villagers worried that asbestos fibers could blow from the factory across their wheat, rice and potato fields and into their tiny mud-and-thatch homes,” writes AP Environment Writer Katy Daigle. Of course they should worry. There is no cure for asbestos diseases and the fibers can stay lodged in your body for decades before symptoms start to show. People are dying today simply because they hugged parents who came home from work with asbestos dust on their clothing.

In 2011, the Asbestos Disease Awareness Organization (ADAO) was asked for support by the citizens of Bihar as they fought the construction of an asbestos factory in their neighborhood.

Look back at the first photo again. Now that’s how you protect yourself from deadly asbestos. Meanwhile, as the unprotected villagers are worrying, David M. Bernstein, PhD continues to offer presentations favorable to the asbestos industry. Why? A July 2014 article by Bernstein, “The health risk of chrysotile asbestos,” featured the following conflict of interest statement:

When you google Bernstein, one of the first places his name pops up is at chrysotile.com, the website for the chrysotile industry.

Bernstein and Robert Nolan, PhD, another defender of chrysotile “would get shot down if they stood up and talked about their research” at a legitimate scientific conference, commented Dr. Richard Lemen in the AP article.

I remember sitting next to Robert Nolan at a 2008 Hearing before the US House of Representatives when he testified in defense of the chrysotile asbestos. I couldn’t believe his testimony to Members of Congress as he tried to refute proven scientific fact.” WHO, ILO, and EPA, as well as at least three Surgeons General, 2014, 2013 and 2009, all agree that “asbestos is a human carcinogen and there is no safe level of exposure.” Acting U.S. Surgeon General Dr. Boris Lushniak felt strongly enough about it to be the keynote speaker at ADAO’s 2014 Asbestos Awareness Conference in Washington, DC.

“It’s unconscionable that while wealthier countries are protecting their people from this deadly carcinogen, the asbestos industry is targeting poor people in a village in India,” said Arthur Frank, MD, PhD, Co-Chair of the ADAO Science Advisory Board. “We shouldn’t be having this discussion anymore. All asbestos kills. It’s that simple.”

ADAO remains committed to preventing asbestos exposure to eliminate mesothelioma and all other asbestos-caused diseases.