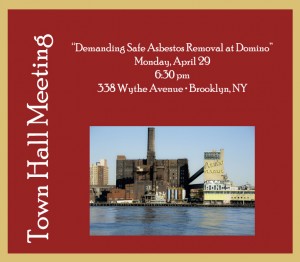 May 2, 2013: Let the Truth Be Told about Asbestos Abatement in Williamsburg, Brooklyn

ADAO is mentioned in the ” Community Right to Know -Demand Safe Removal of Asbestos at Domino” article by Genia Gould at the Williamsburg Greenpoint News + Arts newspare.

As ADAO reported on April 18, the community of Williamsburg, Brooklyn is concerned about their public health and safety during the asbestos abatement and demolition currently occurring at the historic eleven-acre Domino Sugar Refinery site.  Click here to watch the “Open air asbestos abatement at Domino Sugar Refinery, Williamsburg, Brooklyn.” Workers wearing protective clothing called Personal Protective Equipment (PPE) can be seen visibly breaking asbestos-containing cement board with heavy tools on the roof which if done incorrectly can violate EPA and OSHA regulations.

Shockingly, the company hired to complete the asbestos abatement is New York Insulation, which has been cited for severe violations of New York State and New York City asbestos regulations. These violations include:

During the asbestos abatement, the nearby bustling streets were filled with parents pushing babies in strollers, bicyclists whizzing by, and children walking home from school.  The abatement is expected to continue for five more months followed by demolition, then construction slated for another 10 to 15 years.   Local residents are urging the developer and the government for more transparency and accountability in order to protect public health.  Residents have persistently contacted the New York Department of Environmental Protection (DEP), New York Department of Environmental Conservation (DEC), and U.S. Environmental Protection Agency (EPA) with questions about the safety of the asbestos abatement, but these agencies have been entirely unresponsive to their questions.

Many incorrectly assume that asbestos is an old issue, but the abatement occurring in the Williamsburg community is proof that asbestos is unfortunately still a relevant issue. Thankfully, Williamsburg is a community of empowered residents, providing a model for communities throughout the nation to follow.  Williamsburg is taking action by organizing a town hall meeting on Monday, April 29 at 6:30 pm at the Picture Farm Gallery at 338 Wythe Avenue to discuss their questions about the abatement work and the lack of government response. On behalf of ADAO, I will speak at the meeting, with the goals of engaging the community about protecting themselves from asbestos exposure, raising awareness about asbestos, promoting asbestos regulatory compliance and enforcement, and advancing a “Community Right to Know” initiative on the city, state, and national levels. The meeting will be moderated by Dr. Jay Parkinson, MD, MPH, co-founder of Sherpaa.

In support of the Williamsburg community, ADAO calls on local, state, and federal agencies to respect and respond to the community’s Right to Know. Building demolitions, and certainly asbestos abatements, often affect air quality, but the individuals most negatively affected are seldom given the information needed for them to take the necessary steps to protect their health. Unfortunately, this happens much too frequently throughout the nation.

ADAO is eager to join the Williamsburg community in laying the foundation for the “Community Right-to-Know Initiative” that would require public and private homes and buildings to disclose information about the location of asbestos-containing materials (ACM) and abatement to the EPA. Before demolitions and renovations, families and communities need to know if their health will be endangered.  We refuse to have our human rights usurped due to lack of transparency.  We have the right to know.  You have the right to know.  Together, change is possible.