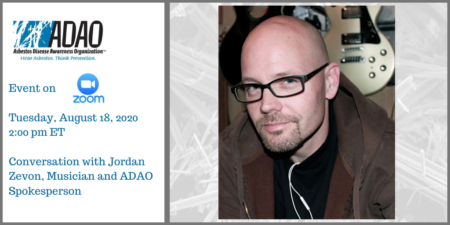 ADAO would like to invite you to join our sixth virtual conversation on Tuesday, August 18 at 2:00 pm ET, this time with musician and ADAO spokesperson Jordan Zevon. Jordan has been ADAO’s national spokesperson for over 15 years, following the death of his father, musician Warren Zevon.

During the call, we will discuss Jordan’s life as a musician, his father’s diagnosis and passing, the work Jordan does for and with ADAO, and the upcoming Record Store Day

Jordan has been instrumental in ADAO’s work towards raising awareness about asbestos-caused illnesses. As our national spokesperson, he has worked hard to warn people about the dangers of asbestos exposure and honor his father’s life by trying to prevent others from having to go through the same pain his family did. We are grateful for all Jordan has done for ADAO. He was instrumental in setting up Record Store Day 2020, which was a partnership with award-winning filmmaker Judd Apatow.

Jordan said of Record Store Day, “When I first understood Judd’s love for my Dad’s music was in an incredibly moving scene in Funny People where Adam Sandler’s character, faced with his own mortality listens to, ‘Keep Me In Your Heart.’ That was followed by an annual tribute concert co-hosted by Jackson Browne. But I was blown away when Judd and Rhino Records approached about releasing, in honor of record store day, Judd’s personally cultivated, ‘Best of’ album (and by album I mean album. Better dust off the record player!). What really sent this honor and experience over-the-top was when everyone involved agreed to donate the proceeds to The Asbestos Disease Awareness Organization, for whom I’ve had the honor to be the national spokesperson for over 15 years. Asbestos is NOT BANNED in the US and the no-brainer bill to ban it is being ignored by some no-brainers in our government. Asbestos has shown up in things like teen make-up kits. It’s enough already.”

The conversation with Jordan will focus on Jordan’s career, his dad and how mesothelioma impacted his family, his work as ADAO’s national spokesperson and even a potential live performance.

To register for the event, please click here. Registration for the event is mandatory and will close on Sunday, August 16 at 5pm ET.

We hope to see you there!