Due to high demand, the press conference is now only open to government employees and credentialed journalists. 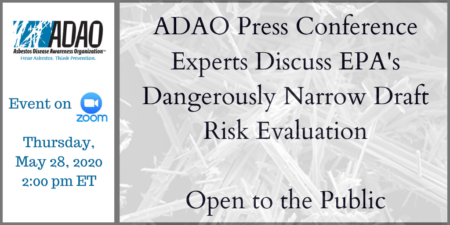 ADAO is please to host a press conference on Thursday, May 28 at 2:00 pm ET to discuss the Environmental Protection Agency (EPA) Draft Asbestos Risk Evaluation. Due to high demand, the press conference is now only open to government employees and credentialed journalists. Should you want to join, please register via this link.

For nearly four years, ADAO and other stakeholders have urged the EPA to use the Frank R. Lautenberg Chemical Safety for the 21st Century Act to ban asbestos. The risks of asbestos have been well-documented since 1989, when the EPA initially banned the carcinogen. However, the ban was overturned in 1991 and under Trump’s EPA, our comments and docket submissions have fallen on deaf ears. This was made even more clear by the release of the draft evaluation, as there are numerous deadly exclusions in the risk evaluation, and the EPA originally tried to push through the risk evaluation during the coronavirus pandemic, when scientists and other experts have little time to give their opinions and suggestions.

Although there are many flaws in the industry friendly Draft Risk Evaluation, we plan to focus one the below six points:

We look forward to seeing you on the call. Together, we will make change happen.

Barry Castleman, ScD is an Environmental Consultant trained in chemical and environmental engineering. He holds a Doctor of Science degree from the Johns Hopkins School of Public Health. He has been a consultant to numerous agencies of the US government and other governments, international bodies, and environmental groups dealing with a wide range of public health issues. He has testified as an expert in civil litigation in the US on the history of asbestos as a public health problem and the reasons for failure to properly control asbestos hazards. Dr. Castleman has spent the past. 40 years working on asbestos as a public health problem.

Penelope Fenner-Crisp, PhD has 40+ years of experience in the preparation and management of assessments of chemical risks to human health and ecosystems.  She held a number of senior scientist and senior management positions in the drinking water, chemicals and pesticides programs during 22 years at EPA. She has served on many WHO and OECD working groups, and NAS, FDA and EPA advisory panels.  She has authored over 50 publications.  Dr. Fenner-Crisp is a member of the EPA Alumni Association board and an active volunteer with EPN.  Dr. Fenner-Crisp received a B.S. in Zoology from the University of Wisconsin-Milwaukee and an M.A. and PhD. in Pharmacology from the University of Texas Medical Branch, followed by a postdoctoral fellowship at Georgetown University.