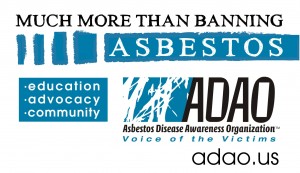 ADAO, the largest nonprofit in the United States dedicated to providing asbestos victims and concerned citizens with a united voice, significantly expanded its global reach through increased education, advocacy, and community initiatives in 2010. More than 6,000 strong, ADAO took its voice to the front lines to help influence policy and regulatory changes

in the U.S., Canada, Mexico, and Asia to fuel the ban on asbestos and promote ongoing research. We strengthened our network of victims, physicians, researchers, public health practitioners, and labor union members even further by utilizing powerful online resources and social media tools including Facebook, Twitter, LinkedIn, and YouTube. Our 2010 growth has been exponential and we excitedly look forward to continued success in 2011.