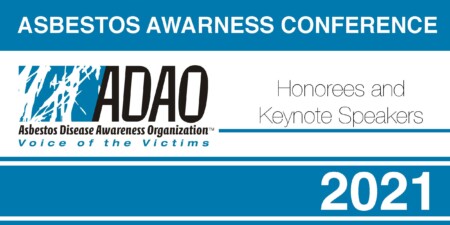 Speakers and Honorees,” which will highlight esteemed participants of our highly anticipated 16th Annual International Asbestos Awareness & Prevention Conference! The ADAO conference, which will take place virtually on September 17-18, 2021, combines expert opinions, victims’ stories, and new technological advancements from nearly 10 countries across the globe into one united voice raising awareness about asbestos. ADAO is the only U.S. nonprofit that organizes annual conferences dedicated solely to preventing asbestos exposure and eliminating asbestos-caused diseases.

The American Federation of Teachers* is a union of professionals that champions fairness; democracy; economic opportunity; and high-quality public education, healthcare and public services for our students, their families and our communities. We are committed to advancing these principles through community engagement, organizing, collective bargaining and political activism, and especially through the work our members do.

Judd Apatow* is one of the most sought-after comedic minds in the industry—having directed, produced and written many of the biggest comedy films and hit TV shows of the last two decades. Apatow’s next feature film, starring Pete Davidson, Marisa Tomei and Bill Burr, is inspired by events from Davidson’s own life. Apatow directed and produced the film, which will be released by Universal Pictures on June 19, 2020, and co-wrote the script alongside Davidson and Dave Sirus. He most recently executive produced comedian Gary Gulman’s HBO special, The Great Depresh which premiered on HBO on Saturday, October 5, the eve of Mental Illness Awareness Week. Outside of film and television, Judd has gathered journal entries, photographs and essays for an intimate portrait of his mentor and legendary stand-up comic, Garry Shandling to create It’s Garry Shandling’s Book, a testament to the lasting impact Shandling had not only on Judd personally but in the world overall. Published November 12 via Random House, the book expands on Apatow’s HBO documentary The Zen Diaries of Garry Shandling. The documentary, which was released on March 26, 2018 won Apatow the 2018 Emmy Award for Outstanding Documentary Or Nonfiction Special. Previous director credits include The 40-Year-Old Virgin, Knocked Up, Funny People, This is 40, Trainwreck, May It Last: A Portrait of the Avett Brothers (with co-director Mike Bonfiglio). He produced The Big Sick (nominated for an Academy Award for Best Original Screenplay), Superbad, Bridesmaids, Pineapple Express, Anchorman, Step Brothers, Talladega Nights, Forgetting Sarah Marshall, and Popstar. For television, he also executive produced Crashing (HBO), series Girls, Freaks and Geeks, Undeclared, The Ben Stiller Show and The Larry Sanders Show and co-created Love (Netflix). His Netflix comedy special Judd Apatow: The Return, marked his comeback to the stage after a 25 year hiatus.*Video Acceptance

Barry Robson , the President of the Asbestos Disease Foundation of Australia (ADFA), became a Union delegate of the Waterside Workers Federation in 1970 and was elected as Senior Vice President of that Union in 1988. In 1995 he was elected Assistant Branch Secretary of the Maritime Union of Australia, a position he held until retirement from the workforce in 2003. From 1991 to 1995 he was a Councilor on the Blacktown City Council. He became a delegate to ADFA in 1996 and was appointed President in 2002 and elected President in 2003, a position he holds today. He has been appointed to the following, Asbestos Research Institute in 2004, Federal Government Asbestos in Telstra Infrastructure in 2013 and Federal Asbestos Safely and Eradication Agency (ASEA) in 2013. Barry has been awarded three Life Memberships, Maritime Union of Australia, St Mary’s Baseball Club and Blacktown Mt Druitt Cardiac Support Group.

Congressman John M. Shimkus* has served in the Army, as a high school teacher, a county treasurer, and now as a Member of the United States House of Representatives for the 15th District of Illinois. Among his duties in Congress, John is a senior member of the and Republican Leader of its Environment & Climate Change Subcommittee. He also serves on the Health and Communications & Technology Subcommittees; the NG9-1-1, Recycling, Coal, Steel, and Baltic Caucuses; as well as the NATO Parliamentary Assembly and Smithsonian Institution Board of Regents. Over the years, John has worked with his colleagues on both sides of the aisle to advance policies that enhance our nation’s energy security and public safety. Several of his legislative initiatives have been signed into law by Presidents Bill Clinton, George W. Bush, and Barack Obama. In 1989 John won his first election, becoming a Collinsville Township trustee. He left his teaching job the following year to campaign full-time and was elected Madison County (Illinois) Treasurer. John began studies for his master’s degree in business administration (MBA) while county treasurer and graduated from Southern Illinois University Edwardsville in 1997. In 1996 John won his first term as a United States Representative from what was then Illinois’ 20th District. From 2003-2013 he represented the 19th District and now he represents the 15th District, 33 counties that stretch from his hometown near St. Louis to the Indiana border and from Hoopeston south to Metropolis. Danville is the largest city in the 15th District.

Robert Sussman , JD, is the principal in Sussman and Associates, a consulting firm that offers advice on energy and environmental policy issues to clients in the non-profit and private sectors.  He is also an Adjunct Professor at the Georgetown University Law Center and was a Visiting Lecturer at Yale Law School. Bob served in the Obama Administration as C0-Chair of the Transition Team for EPA and then as Senior Policy Counsel to the EPA Administrator from 2009-2013.  He served in the Clinton Administration as the EPA Deputy Administrator during 1993-94. At the end of 2007, Bob retired as a partner at the law firm of Latham & Watkins, where he headed the firm’s environmental practice in DC. Bob was a Senior Fellow at the Center for American Progress in 2008. He is currently serving on the Board on Environmental Science of the National Academy of Sciences and as a Commissioner of the Interstate Commission for the Potomac River Basin. Bob is a magna cum laude 1969 graduate of Yale College and a 1973 graduate of Yale Law School.  Bob has posted numerous blogs on the Brookings Institution Website and elsewhere and published articles in the Environmental Law Reporter and other publications.

Congressman Paul D. Tonko* represents New York’s 20th District in the U.S House of Representatives, including all of Albany and Schenectady Counties and parts of Montgomery, Rensselaer and Saratoga Counties in Upstate New York. Now in his sixth term, Tonko serves on the Committee on Energy and Commerce and was elected by his peers to chair the Subcommittee on the Environment and Climate Change where he oversees a wide range of issues including clean drinking water, regulation of toxic substances and national climate action. In addition, he was appointed this term to join the Committee on Natural Resources and to continue his service on the Science, Space, and Technology Committee where he has been a longtime advocate for scientific integrity and public research. In addition to his committee duties, Tonko co-chairs the Sustainable Energy and Environment Coalition. He is also a longtime honorary vice chair of the Alliance to Save Energy, a bipartisan, nonprofit coalition that promotes energy efficiency across all sectors of the global economy. Prior to serving in Congress, Tonko was the president and CEO of the New York State Energy Research and Development Authority. Before that, he served in the New York State Assembly for 25 years, 15 of which he was chair of the Committee on Energy. At the age of 26, he was the youngest person in the history of Montgomery County to be elected to the county’s Board of Supervisors, which he chaired until 1981. Tonko graduated from Clarkson University with a degree in mechanical and industrial engineering and is a former engineer for the New York State Public Service Commission. He is a lifelong resident of Amsterdam, New York.

Rebecca L. Reindel, MS, MPH, is the Safety and Health Director at the AFL-CIO, the federation of 55 labor unions representing 12.5 million working men and women in the United States. She provides safety and health support to unions and relies on workers’ experiences and key research to advocate at the federal policy level for improved working conditions, including stronger protections for chemical exposures at work, like asbestos. In 2019, she testified in front of Congress in support of H.R. 1603 — the Alan Reinstein Ban Asbestos Now Act on behalf of the AFL-CIO. Rebecca has worked on the ground conducting research and at the national level for EPA and OSHA, using science in public policy. She serves as a board officer for several nonprofits in occupational and environmental health and is an active member of the American Public Health Association. She is very active in recruiting and training the next generation of worker health and safety activists. Rebecca is from a union family with a background in social justice issues and received her master’s degrees in Forensic Toxicology and Public Health from the George Washington University.

Wendy Ruderman, a reporter since 1991, is a new staff reporter at The Marshall Project, a nonpartisan, nonprofit news organization that delves into the U.S. criminal justice system. She joined The Marshall Project this September from The Philadelphia Inquirer, where she worked for nearly 20 years and was a key member of newspaper’s Investigations Team. Her most recent project, “Toxic City: Sick Schools,” authored with Inquirer reporters Barbara Laker and Dylan Purcell, won numerous national awards and was named as a Pulitzer finalist in the local reporting category. The series examined how environmental hazards, including asbestos, lead paint and mold, inside Philadelphia’s aging public schools rob children of healthy and safe places to learn and grow. Ruderman, along with colleague Barbara Laker, won the 2010 Pulitzer Prize for Investigative Reporting for a series about police corruption. She earned a master’s from the Columbia University Graduate School of Journalism in 1997 and was a 2016 National Fellow at the University of Southern California’s Center for Health Journalism. She currently serves as a member of the Ethics Advisory Council at Villanova University. She lives in South Jersey with her two teenage boys.

Julie Gundlach is an asbestos victim turned advocate. Diagnosed with malignant peritoneal mesothelioma in August of 2006, Julie fought to find viable treatment options through five surgeries and multiple chemotherapy protocols, and has remained stable since 2014. A victim of secondary exposure, Julie’s anger and frustration at the horrific amount of asbestos exposure led her to become an advocate in the fight for a ban on asbestos. She has traveled to lobby at Capitol Hill with ADAO and is committed to fighting for a complete ban on asbestos.