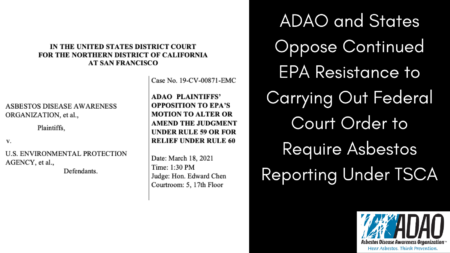 On February 26, ADAO and its co-plaintiffs  filed a brief opposing the February 2 motion of the Environmental Protection Agency (EPA) to reverse Judge Edward Chen’s Dec. 22 landmark ruling that the Agency must add asbestos to its Chemical Data Reporting (CDR) rule under the Toxic Substances Control Act (TSCA)  In its filing, EPA argued that, rather than amending the CDR rule to require reporting as Judge Chen ordered,  the “appropriate remedy” to address the Trump Administration’s flawed response to states’ and environmentalists’ petitions was to direct the Agency merely to reconsider the petitions.

Robert Sussman, counsel for ADAO and its co-petitioners, said,“We’re responding forcefully to EPA’s misguided and legally unsupportable attempt to block Judge Chen’s December 22 decision directing the Agency to proceed with reporting on asbestos use and exposure. It’s surprising and troubling that EPA would resist this common-sense public health measure on the basis of dubious legal claims rather than simply comply with its obligations under TSCA.”

This was the first time the Biden Administration has addressed Judge Chen’s ruling in our case, Asbestos Disease Awareness Organization (ADAO) et al v. EPA and State of California et al v. EPA, in which Judge Chen found that EPA acted unlawfully when it denied petitions calling for asbestos to be added to the CDR reporting rule. We are disappointed in this first move by the Administration, especially since during the presidential campaign, Biden’s team made it clear he was ready to address the horrible legacy of asbestos death and disease in our country.  We hope the new EPA leadership will reconsider the ill-conceived positions of its lawyers.

Linda Reinstein, ADAO President, said, “We’ve fought for years to provide the public with basic information about how and where asbestos is being used in this country so that we can prevent exposure to this lethal substance. After Judge Chen affirmed EPA’s responsibility under TSCA to require industry to report this information, it’s disheartening to see the Agency’s lawyers continue to resist actions that EPA should have taken years ago.”

The Chemical Data Reporting (CDR) rule under TSCA requires manufacturers (including importers) to provide EPA with information on the production and use of chemicals in commerce; however, in 2017, EPA exempted asbestos from those requirements, finding that “reporting is not required for ‘naturally occurring chemical substances.’”

Raw asbestos and asbestos-containing products now enter our country without restriction, which is why ADAO has worked tirelessly for nearly seventeen years to lay the groundwork for a full asbestos ban. Starting in late 2016, EPA has been conducting a TSCA risk evaluation which could provide the basis for such a ban. However, ADAO has been concerned that EPA lacked the comprehensive information on ongoing asbestos use and exposure necessary for a sound and health-protective risk evaluation. After EPA denied the petitions of ADAO and states to require CDR reporting on asbestos in 2018,  ADAO filed this suit with the U.S. District Court for the Northern District of California to close the asbestos reporting loopholes.

In his December 22 decision, Judge Chen emphasized “how little information EPA has about the quantities of asbestos-containing products in the U.S. chain of commerce and the overall consumer and occupational exposure for downstream uses of asbestos.” Judge Chen held that EPA’s “unwillingness to act stands in the face of its significant statutory authority to require that this information be reported via the CDR rule and runs contrary to its obligation to collect reasonably available information to inform and facilitate its regulatory obligations under TSCA.” Judge Chen “directed” EPA to amend the CDR rule to require the necessary reporting.

EPA’s Feb. 2 filing is yet another attempt to dodge its legal obligations. In his brief in opposition, Sussman said, “The Court should deny the motion because it impermissibly seeks to relitigate decided matters, is wrong as a matter of law, and would unacceptably defer, perhaps forever, the important remedy the Court has ordered. ”

ADAO’s position was reinforced by a brief submitted by Attorneys General representing 12 states and the District of Columbia.

The facts are irrefutable. Asbestos, a known carcinogen, continues to kill over 40,000 Americans each year and represents one of the largest preventable health threats that our population faces. Without a ban, the US continues to import and use asbestos. Nearly 70 other countries have banned asbestos and/or use remain largely restricted. Additional information can be found in ADAO’s “EPA’s Failure to Ban Asbestos: The Impact from 1989 – 2019 on Public Health, Environment, and the Economy” Report.

Americans deserve to have their air, soil, and water free from toxic asbestos. Enough.