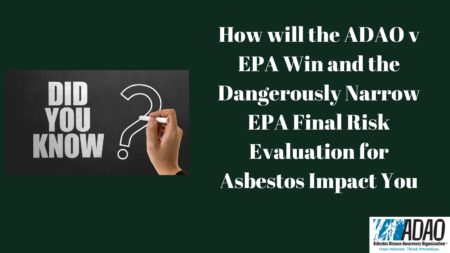 The Asbestos Disease Awareness Organization (ADAO)  is thrilled to announce that the Honorable Judge Edward Chen has granted ADAO and our five co-plaintiffs a decisive victory in our legal suit to demand that the Environmental Protection Agency (EPA) require companies importing and using asbestos to report to the EPA where the asbestos is going.

District Court Judge Edward J. Chen’s extensive opinion sides with ADAO in its legal challenge to EPA’s 2018 denial of its petition to include asbestos in EPA’s Chemical Data Reporting (CDR) rule. This legal victory puts us in a stronger position than ever before in our fight to ban asbestos. As we enter 2021, and look towards a Biden/Harris administration, we are in a great position to finally ban asbestos for once and for all. President and Vice-president elects Biden and Harris have made it clear that they plan to address the dangers of asbestos exposure, and Judge Chen’s firm opinion allows us to better strategize as we enter the new year.

The Chemical Data Reporting (CDR) rule under TSCA requires manufacturers (including importers) to provide EPA with information on the production and use of chemicals in commerce; however, in 2017, EPA exempted asbestos from those requirements, finding that “reporting is not required for ‘naturally occurring chemical substances.’”

Without an asbestos ban, both raw asbestos and asbestos-contaminated products enter our country without responsibility or accountability, which is why ADAO has worked tirelessly for nearly seventeen years to lay the groundwork for this decision and a full asbestos ban. In September 2018, ADAO filed this suit with the U.S. District Court for the Northern District of California to close the reporting loopholes by overturning the Environmental Protection Agency’s (EPA) denial of its Right to Know Petition under section 21 of TSCA.

In his decision, Judge Chen emphasized “how little information EPA has about the quantities of asbestos-containing products in the U.S. chain of commerce and the overall consumer and occupational exposure for downstream uses of asbestos.”

He held that EPA’s “unwillingness to act stands in the face of its significant statutory authority to require that this information be reported via the CDR rule and runs contrary to its obligation to collect reasonably available information to inform and facilitate its regulatory obligations under TSCA.”

“Judge Chen’s decision could not be clearer that EPA lacks basic information on asbestos exposure and risk and has no credible excuse for failing to use its TSCA reporting authority to fill these glaring gaps in understanding,” said ADAO’s counsel, Robert M. Sussman. “As the Science Advisory Committee on Chemicals (SAAC) found, this lack of knowledge is among the many serious flaws in the Draft Risk Evaluation for Asbestos and demonstrates that EPA is failing to  provide the protection against this lethal substance that Congress demanded when it amended TSCA in 2016.”

This fact was made even clearer on December 30, when right under the wire, EPA released their  Final Risk Evaluation for Asbestos, Part 1: Chrysotile Asbestos. The dangerously narrow risk evaluation contains multiple holes that will ultimately lead to more exposure and more deaths. We are, however, not surprised EPA ignored their own Science Advisory Committee on Chemicals (SACC) and other independent experts and instead continue to minimize the risk.

We are incredibly grateful to our co-plaintiffs and the Attorneys General for joining this fight with us. We are also indebted to Bob for his tireless work and dedication to this case. His intelligence, energy, and courtroom skills are a blessing to this fight, and we at ADAO owe him the biggest thanks for all he has done to help Americans be safe from this deadly carcinogen.

Asbestos is a known carcinogen and kills nearly 40,000 Americans each year from diseases including, but not limited to, mesothelioma and cancers of the lungs, ovaries and larynx. The last attempt to ban asbestos was over 30 years ago, in 1989. The ban was overruled in court just two years later in a suit by industry, and since then, the U.S. government has continued to put profit over public health.

This case is proof that once again, Trump’s EPA is failing to protect American lives from the threat of asbestos. We need both a legal and legislative strategy in our fight against asbestos, which is why we continue to urge Congress to pass the Alan Reinstein Ban Asbestos Now Act (ARBAN). The bill would ban asbestos imports and use in just one year and would provide all Americans with the “Right to Know” where asbestos is used, along with forcing our country to do an intense investigation into where legacy asbestos can still be found.

Imports are on the rise yet again, and we are on track to import more asbestos this year than in 2019. We know that ARBAN has bipartisan support, as shown in the U.S. House of Representatives Committee on Energy and Commerce with its 47-1 vote. It is time for Congress members to reach across the aisle and pass this bill to save lives.

To all our supporters: We know that this legal battle has been long, and our fight to get a ban bill passed by Congress has been even longer. But this win is a monumental step towards safeguarding the lives of all Americans from this lethal carcinogen. Every small step we take matters, as it is all building to a full legal and legislative ban on asbestos use and imports in the United States. No one deserves to risk their life just for going to school, work, or buying a consumer product. Enough is enough, let’s ban asbestos for once and for all.