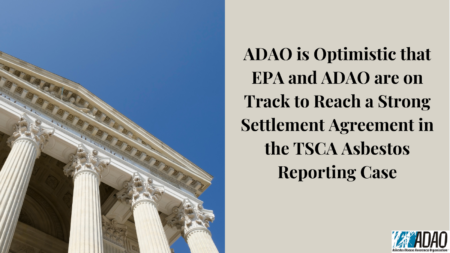 After several years of litigation, the Environmental Protection Agency (EPA) is poised to require companies to report their asbestos importation and use. This reporting is critical to understand and address the risks of asbestos and protect the health of every person in America from asbestos.

Over the last several weeks, Asbestos Disease Awareness Organization (ADAO) and the State plaintiffs have been discussing a settlement of the outstanding issues. At the conference meeting today, the conceptual settlement agreement was outlined and the Court concurred with moving forward.

Sussman stated, “We support the preliminary outline of the settlement that was presented by EPA counsel at the status conference. If finalized and approved by Judge Chen, the settlement would preserve the principal findings and conclusions of the Judge’s decision and commit EPA to a rulemaking schedule for requiring reporting on asbestos while at the same time avoiding further litigation. We look forward to completing the settlement negotiations and submitting final settlement documents to Judge Chen for his approval in the next month.”

According to Linda Reinstein, ADAO President, “We are pleased that after several years of litigation, EPA is poised to move ahead with rulemaking under Toxic Substances Control Act (TSCA) to require companies to report their asbestos importation and use. We have long believed this reporting is necessary to understand and address the risks of asbestos and protect public health. We started this case on September 26th, 2018 — Mesothelioma Awareness Day.  Since then, more than 80,0000 Americans have died due to preventable asbestos-caused diseases.”

In his December 22 decision, Judge Chen emphasized, “how little information EPA has about the quantities of asbestos-containing products in the U.S. chain of commerce and the overall consumer and occupational exposure for downstream uses of asbestos.”

Judge Chen held that EPA’s, “unwillingness to act stands in the face of its significant statutory authority to require that this information be reported via the Chemical Data Reporting (CDR) rule and runs contrary to its obligation to collect reasonably available information to inform and facilitate its regulatory obligations under TSCA.”

This information was made public as a result of a hearing  Thursday, April 15, 2021 in the U.S. District Court for the Northern District of California during a status conference in our case against the Environmental Protection Agency (EPA), Asbestos Disease Awareness Organization et al v. Wheeler et. al.