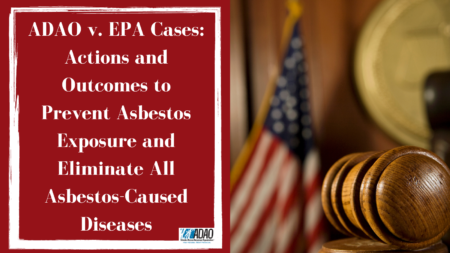 For seventeen years, the Asbestos Disease Awareness Organization (ADAO) has been frequently called upon to speak to Congress, health care providers, national and international organizations, families, and more, about the deadly legacy of asbestos and the urgent need for a global asbestos ban. While ADAO continues to focus on our three pillars of education, advocacy, and community, we have expanded our efforts to include legal and legislative initiatives as well. While our legislative strategy focuses on a ban bill, we have also begun to engage in legal efforts over the last four years, and we have made incredible and significant strides.

On the legislative front, we took landmark steps forward in 2019 with Sen. Merkley and Rep. Bonamici’s Alan Reinstein Ban Asbestos Now Act (ARBAN). We’ve never been closer to legislation banning asbestos, requiring use and exposure reporting, and launching a new study by the National Academy of Sciences to address the risks of legacy asbestos in homes, schools, and workplaces.

Below, we detail the significant accomplishments we have achieved on the legal front over the last four years and elaborate on the important new actions we plan to embark on this year.

Our legal initiatives stem from the bipartisan 2016 amendments to the Toxic Substances Control Act of 1976 (TSCA), which is the federal law that provides EPA with authority to assess and regulate the risks of chemicals to health and the environment. Under the old law, in 1989, EPA issued a rule under section 6(a) of TSCA, prohibiting most asbestos uses but, following an industry challenge, the rule was overturned in 1991 by the Fifth Circuit Court of Appeals based on limitations in TSCA unrelated to the risks of asbestos. During the TSCA reform process in 2016, there was a bipartisan agreement that asbestos is a poster child for TSCA’s failure to protect public health, and that any new law needed to ensure that EPA could finally do its job and ban asbestos. After the TSCA amendments were enacted, many in Congress and the public hoped EPA would use its expanded authority to conduct risk evaluations and regulate unsafe chemicals to reinstate the 1989 asbestos ban. However, that did not happen.

In December 2016, shortly after the passage of the new law, EPA selected ten chemicals for initial risk evaluations, including asbestos. Under TSCA as amended, if a risk evaluation shows that a chemical presents an unreasonable risk, EPA is then required to regulate the chemical to eliminate that risk. ADAO and many others hoped that the EPA risk evaluation would lead to a comprehensive asbestos ban. However, this hope faded as EPA narrowed the scope of the risk evaluation, used a questionable Significant New Use Rule (SNUR) to track, but not ban, the reintroduction of discontinued asbestos products, and refused to use its broad TSCA information collection authorities to require reporting by industry of essential use and exposure information.

The Trump EPA issued its Final Risk Evaluation (FRE) for Asbestos on December 30, 2020. Described by EPA as a “Part 1” evaluation, the FRE concluded that certain ongoing asbestos uses present an unreasonable risk of injury, but it did not address numerous aspects of asbestos exposure and risk, excluding all asbestos fibers except for chrysotile and the health impacts of legacy asbestos uses and associated disposal. The Agency stated its intent to conduct a future “Part 2” evaluation focused on legacy asbestos but provided no specifics about how it would be conducted and failed to set a schedule for completing it.

ADAO and many leading scientists criticized the gaps and omissions in the March 2020 draft risk evaluation (DRE) and expressed concern that it understated the risks of asbestos and failed to account for numerous pathways of exposure and risk. EPA’s Independent Science Advisory Committee on Chemicals (SACC) agreed with these concerns in its review of the DRE. In its  lengthy August 28, 2020 report, the SACC concluded that: “Overall, EPA’s environmental and human health risk evaluation for asbestos was not considered adequate and resulted in low confidence in the conclusions.” However, the FRE generally ignored the SACC concerns and failed to implement its recommendations.

Below, we provide highlights of two cases that are completed and two that have just been initiated.

NATURE OF ACTION: On August 10, 2017, Safer Chemicals Healthy Families (SCHF), ADAO, and other plaintiffs filed petitions in the U.S. Court of Appeals for the Ninth Circuit to review EPA’s “framework rule” for risk evaluations under the 2016 TSCA amendments. The preamble to the rule stated that EPA did not consider “legacy activities”—consisting of “legacy uses,” “associated disposals,” and “legacy disposals”—to be TSCA conditions of use. It defined the term “legacy uses” as “the circumstances associated with activities that do not reflect ongoing or prospective manufacturing, processing, or distribution.” EPA relied on this interpretation to exclude legacy activities from its asbestos risk evaluation.

Before the Court of Appeals, ADAO and its co-petitioners took the position that use and disposal of legacy asbestos products are TSCA “conditions of use” and must be included in EPA risk evaluations.

DECISION: In its November 14, 2019 decision, the Court of Appeals held “that EPA’s exclusion of legacy uses and associated disposals contradicts TSCA’s plain language.” As it explained:

“EPA’s contention that TSCA can reasonably be read to refer to the future use of a product, and disposals associated with such use, only when the product will also be manufactured in the future for that use—and not when the product is no longer manufactured for the relevant use—is without merit. TSCA’s “conditions of use” definition plainly addresses conditions of use of chemical substances that will be used or disposed of in the future, regardless of whether the substances are still manufactured for the particular use.”

The Court was well aware that its conclusion applied to asbestos, noting that “[f]or example, although asbestos is now infrequently used in making new insulation, it remains in place in previously installed insulation” and that “future disposal of asbestos insulation . . .  unambiguously falls within TSCA’s definition of ‘conditions of use.’”

NATURE OF ACTION: On September 26, 2018 (Mesothelioma Awareness Day), ADAO petitioned EPA under section 21 of TSCA to increase reporting under the Chemical Data Reporting (CDR) rule by companies importing and using asbestos. The CDR rule requires manufacturers (including importers) to provide EPA with information on the production and use of chemicals in commerce. However, in 2017, EPA exempted asbestos from those requirements, finding that “reporting is not required for ‘naturally occurring chemical substances.’”

ADAO’s petition was based on concerns that, because asbestos was exempt from the CDR rule, EPA lacked use and exposure information essential for an informed risk evaluation. EPA denied the petition on December 21, 2018 on the grounds that the petitioners did not demonstrate that it is necessary to amend the CDR rule. ADAO and its co-petitioners then filed suit in February 2019 under section 21 of TSCA in the U.S. District Court for the Northern District of California. Joining ADAO were the American Public Health Association (APHA), Center for Environmental Health (CEH), Environmental Health Strategies Center (EHSC), Environmental Working Group (EWG), and Safer Chemicals, Healthy Families (SCHF).

On January 31, 2019, Attorneys General (AGs) of 14 states and the District of Columbia filed a parallel petition that requested EPA to likewise amend its CDR rule to require reporting on asbestos. The petition was filed by AGs of the Commonwealths of Massachusetts and Pennsylvania, the States of California, Connecticut, Hawaii, Maine, Maryland, Minnesota, New Jersey, New York, Oregon, Rhode Island, Vermont, and Washington, and the District of Columbia. EPA denied the petition on April 3, 2019 and the AGs filed suit.

DECISION: On December 22, 2019, Judge Edward Chen granted summary judgement for both sets of plaintiffs. The Court categorically rejected EPA’s rationale for denying the petition, finding that:

“EPA’s decision not to collect the information which the Plaintiffs contend should be collected via the elimination of the CDR exceptions did not come after taking a ‘hard look’ at the value and availability of the additional information the EPA has forsaken.”

The Court then ruled that:

“EPA is not incapable of collecting this information; instead, it is unwilling to do so. EPA’s unwillingness to act stands in the face of its significant statutory authority to require that this information be reported via the CDR rule and runs contrary to its obligation to collect reasonably available information to inform and facilitate its regulatory obligations under TSCA. By failing to do so, the EPA has not acted in accordance with law. See 15 U.S.C. § 2625(k); 40 CFR 702.33(5). By failing to consider all “relevant factors” in its information-gathering efforts, the EPA has also acted arbitrarily and capriciously.

Based on this ruling, the Order stated that “EPA is directed to amend its CDR reporting rule pursuant to its authority under 15 U.S.C. § 2607(a)(1)(A) (i.e., under Section 8(a) of TSCA), to address the information-gathering deficiencies identified herein.” Id. (emphasis added) The Court retained jurisdiction “for purposes of ensuring compliance.”

TSCA Section 8(a) Reporting and Recordkeeping Requirements for Asbestos

This rulemaking, under the authority of section 8(a) of the Toxic Substances Control Act (TSCA), would require the maintenance of records and submission to EPA: reports by manufacturers, importers and processors of asbestos and mixtures and articles containing asbestos (including as an impurity). The information sought includes data on the quantities of asbestos used in making products, employee exposure data, and waste disposal data. Reported information would be used by EPA and other Federal agencies in considering the regulation of asbestos.

On January 26, 2021, ADAO took two important legal actions building on its concerns about the FRE.

First, together with other public health organizations and well-known asbestos experts, ADAO filed a petition with the Ninth Circuit Court of Appeals to review the FRE for asbestos. The petitioners plan to argue that the gaps and omissions in the FRE were inconsistent with TSCA and that EPA must do a more comprehensive evaluation that is fully protective of public health. For example, the final risk evaluation did not consider all asbestos fibers, known health effects and current uses, ignored asbestos-contaminated talc, and did not address environmental pathways of exposure.  ADAO will argue that EPA must go back to the drawing board and fill these gaps. The TSCA risk evaluation is the first comprehensive US assessment of asbestos risk since the 1980s and it is critical that it be done right. In its current form, it’s disappointing and inadequate.

Second, ADAO and its partners sent EPA a 60-day notice letter informing the Agency of its intent to file suit in a federal district court under section 20 of TSCA, which authorizes citizens’ suits to compel EPA to perform a non-discretionary duty. The “duty” that EPA violated is its obligation under the 2019 Safer Chemicals, Healthy Families Ninth Circuit decision to evaluate the risks of “legacy” asbestos, which is found in millions of buildings across the US. The Agency did not include these legacy exposures in the FRE. While it promised to undertake a Part 2 risk evaluation that addressed legacy asbestos, it did not provide a timeline or other details.

The goal of these TSCA section 20 actions is to obtain a court order establishing an enforceable deadline for completing the legacy risk evaluation and defining its scope. Otherwise, the evaluation may never be completed and legacy exposures will remain a major risk factor for millions of people.

On May 18, we filed suit against EPA in the U.S. District Court for the Northern District of California (Case 3:21-cv-03716 Filed 05/18/21) to ensure that the Agency meets its obligation to evaluate the risks of “legacy” asbestos found in millions of buildings and in consumer products across the United States, as required under the TSCA.

ADAO remains committed to banning asbestos in the U.S. and protecting public health. While we will remain dedicated to education, advocacy, and community, we will also push forward legislative and legal processes to accomplish our goals and rid our country of this lethal carcinogen.