Skip to content
Home/Blog/Asbestos Quebec City Sign Will Change, but Over 350,000 Million Metric Tons of Canadian Asbestos Imports Will Haunt the U.S. Forever

Asbestos Quebec City Sign Will Change, but Over 350,000 Million Metric Tons of Canadian Asbestos Imports Will Haunt the U.S. Forever 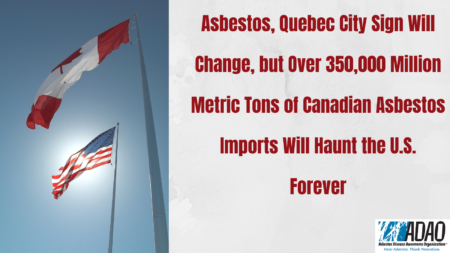 A town in Quebec will finally lose its carcinogenic name. After years of debate and strife, the Quebec town of Asbestos has finally agreed to a name change. The community of about 7,000 people will now be known as “Val-des-Sources,” which roughly translates to Valley of the Springs.

The Asbestos city sign will change, but one horrific fact won’t — asbestos has killed millions of people in both Canada and the United States over its decades of use. Hungry for the so-called “Magic Mineral,” the USA was one of Canada’s best customers. In fact, from the time EPA tried to ban asbestos in 1989 until the mine closed in 2012, companies imported over 350,000 million metric tons of raw asbestos from our northern neighbor.

The town was built around the massive Jeffrey Mine, which at one point was the largest open-cast chrysotile asbestos mine in the world, according to The Washington Post. The name change was first brought up in 2006, but many community members felt the name was part of the town’s identity. That’s the same year the World Health Organization issued their Elimination of Asbestos-Related Diseases recommendation, which stated among other facts and recommendations: “the most efficient way to eliminate asbestos-related diseases is to stop using all types of asbestos.”

The pro-chrysotile asbestos propaganda continues to run deep even though asbestos has been known to cause deadly diseases such as mesothelioma, lung and ovarian cancers, and asbestosis, among others, for decades. There is no safe level of exposure to asbestos, and the toxin is now banned in nearly 70 countries worldwide. Changing the name will help stop the glorification of the toxin that causes nearly 240,000 deaths worldwide each year.

Canada closed the Jeffrey Mine in 2012 and banned the known carcinogen just two years ago in 2018, decades after many other industrial nations. This ban unfortunately does not mean all Canadians are safe from asbestos exposure, as the carcinogen can still be found in buildings and waste from the now abandoned mines. However, the name change is another positive step towards ridding the country of all relationships with the dangerous toxin.

Before banning asbestos, Canada produced the known carcinogen to feed demand domestically and in the United States—which was one of the largest importers of Canadian asbestos—and it is no stranger to the devastating impacts asbestos has on human health. In fact, according to The New York Times, over the years, asbestos became the leading cause of workplace deaths in Canada.

Brilliantly in 2011, ‘The Daily Show with Jon Stewart’ and Aasif Mandvi did a tongue-in-cheek segment focused on Asbestos, Quebec in: “Ored to Death.”  Assfi asked Bernard Coulombe, CEO of Jeffrey Asbestos Mine, “Does asbestos mean something different in French than it does in English? Because in English it means slow hacking death.”

Despite this exciting name change, there is still a long way to go in both Canada and the U.S. to protect people from asbestos exposure. Canada’s 2018 ban on the import, sale, and use of asbestos does not prevent companies in Quebec from sifting through the waste left over from decades of mining asbestos to look for magnesium, and there is an exemption for the chlor-alkali industry that allows the industry to continue importing and and using processed asbestos fibers in its diaphragms until 2030.

All progress is good progress, and we hope those residents in the newly dubbed Valley of the Springs can continue to move past a time of asbestos exposure. We should not live in fear of our air, water, soil or structures killing us through deadly carcinogens.

Where were the 350,000 metric tons of asbestos used? Without a ban and corporate transparency, we will never really know if it is in our homes, schools, workplaces, cars, or elsewhere.

In the U.S., we are a step behind the Valley of the Springs and the rest of Canada, as there is no ban. However, the Alan Reinstein Ban Asbestos Now (ARBAN) Act would ban all asbestos imports and use within one year of enactment, and would provide a thorough investigation of all structures to search for legacy asbestos. The bill is the most comprehensive ban bill put in front of the U.S. Congress in 30 years, and would save tens of thousands of lives each year. ADAO urges Congress to pass ARBAN in the 116th Congress and start saving lives.