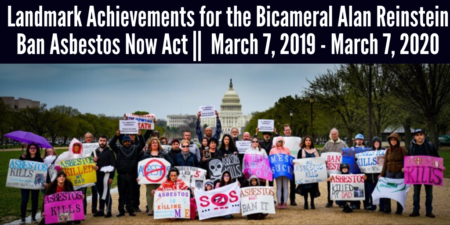 2019 was a year of impressive progress for The Alan Reinstein Ban Asbestos Now Act of 2019 (ARBAN) (H.R. 1603). On March 7, 2019, the bill was introduced in both Houses of Congress. A legislative hearing was held on May 8, 2019. The bill was voted out of the Committee on Energy and Commerce (E&C) with a strong bipartisan margin of 47-1 on November 19. All that remains is for the full House to pass ARBAN, setting the stage for it to go to the Senate where we expect continued bipartisan support.

Our progress in advancing ARBAN is due to a lot of hard work, dedication and time, as well as to the leadership and participation of many around the country. The bicameral bill has the support of nearly 70 Congressional Members, but outside of Congress, there has been a huge surge of support for ARBAN. In July 2019, 18 Attorneys General (AG) of California, Connecticut, Delaware, Hawaii, Iowa, Maine, Maryland, Massachusetts, Minnesota, New Jersey, New York, North Carolina, Oregon, Rhode Island, Vermont, Virginia, Washington, and the District of Columbia sent a letter to the leadership of the U.S. House of Representatives E&C Committee urging them to support ARBAN.

“The undersigned Attorneys General strongly support the ‘Alan Reinstein Ban Asbestos Now Act of 2019,’ H.R. 1603, to prohibit the manufacture, processing and distribution in commerce of asbestos and to require EPA to report to Congress on legacy asbestos in buildings,” the letter reads. “We would welcome the opportunity to work with your Committee to ensure that the legislation that results from your consideration of the bill adequately addresses the unreasonable risk to health and environment posed by asbestos, both with respect to future uses and the consideration of ongoing exposure risk from past uses.”

We have seen strong expert voices join our fight over the past year. On October 15, two former Environmental Protection Agency (EPA) Administrators, Gina McCarthy and William K. Reilly, wrote an op-ed in The New York Times expressing their support for ARBAN.

“Congress should do what this E.P.A. has failed to do: consider all the science and ban asbestos once and for all. Pass the Alan Reinstein Ban Asbestos Now Act, save tens of thousands of lives and close the book on asbestos use for good,” Reilly and McCarthy wrote in their op-ed, “Asbestos Kills Nearly 40,000 Americans a Year. Ban It.”

On World Cancer Day in February of this year, ADAO released a letter signed by nearly forty leading scientists in support of ARBAN. The letter to Speaker Pelosi and Majority Leader Hoyer called for immediate passage of H.R. 1603. The scientists, who have devoted their careers as researchers, teachers and government officials to combat the public health threat of asbestos underscore that “the public will not be protected unless we ban all asbestos mining, importation and use.”

ARBAN would amend the Toxic Substances Control Act (TSCA). In their February 4 letter, the leading asbestos scientists supporting ARBAN emphasized that the benefits that ARBAN can deliver now: “While recognizing that scientific understanding of the mineral composition and health effects of asbestos and asbestos-like fibers is evolving and may warrant a broader definition in the future, we believe the current definition will achieve the public health benefits of the bill. We support the efforts of government scientists to improve the definition of asbestos in order to inform future legislative and regulatory actions.”

As ARBAN advanced in 2019,  the Trump Administration provided more evidence of its embarrassing lack of leadership in protecting Americans from asbestos under TSCA. In April, EPA finalized a Significant New Use Rule (SNUR) that merely requires industry to notify EPA before reintroducing certain obsolete asbestos products. The SNUR opens the door to more use of asbestos and is the opposite of the ban on asbestos that ARBAN would put in place.  Then in November, EPA’s unwillingness to address the ongoing use and disposal of “legacy” asbestos products present in millions of structures across the US in its TSCA risk evaluation was overturned by the Ninth Circuit Court of Appeals. In the wake of this decision, senior EPA officials have waffled on their obligation to include legacy asbestos exposure and risk in the ongoing risk evaluation. As a result, just last week, ADAO and 16 other groups  wrote to EPA Administrator Wheeler demanding that the Agency carry out its responsibilities under the law. Under ARBAN, the National Academy of Sciences would conduct a comprehensive, independent study of legacy asbestos — exactly what EPA refuses to do under TSCA.

This past year has made it clear — the time is now for the House to vote and pass H.R. 1603 to ban asbestos. With bipartisan concern and support, we are extremely confident Members on both sides of the aisle can, and must, get behind this life-saving bill.

“Every day that goes by without an asbestos ban is another day that Americans’ health and lives are being put at grave risk. While the EPA fiddles, Americans are dying,” said U.S. Sen. Jeff Merkley. “More than 60 other nations have already recognized asbestos as the deadly substance it is, and acted to protect their citizens by banning asbestos. It’s time for us to catch up to the rest of the developed world, and end this dangerous public health threat once and for all. Thanks to the tremendous efforts of the Asbestos Disease Awareness Organization, this legislation has now moved farther than ever—passing out of the House Energy and Commerce Committee on a near-unanimous vote. I know powerful industries may make more money by using asbestos, but this is supposed to be government by and for the people, so let’s finish the job and pass this ban.”

We would like to thank all the organizations and individuals who have supported the bill and who have helped it to get to this monumental point. We are particularly grateful to Representatives Frank Pallone, Paul Tonko, Greg Walden and John Shimkus for all they did to get ARBAN through the E&C Committee with such bipartisan support. ADAO is also thankful to Senator Jeff Merkley for leading the way for ARBAN in the Senate and we would like to thank Senator Steve Daines (R-MO), who became the first Republican in the Senate to join forces with Senator Merkley in support of ARBAN.

Though we have rescheduled ADAO’s 16th Annual International Asbestos Awareness and Prevention Conference in light of the recent spread of coronavirus, we plan to proudly honor all ARBAN supporters with the Tribute of Inspiration Award in the program we will still print and distribute. Once the new date for the conference is set, we look forward to honoring them at the event.  To learn more about our conference, click here.