Skip to content
Home/Blog, Press Release/CONGRATULATIONS XAVIER BECERRA ON YOUR CONFIRMATION AS THE SECRETARY OF HEALTH AND HUMAN SERVICES. LETS EDUCATE AMERICANS ABOUT THE DANGERS OF ASBESTOS NOW!

CONGRATULATIONS XAVIER BECERRA ON YOUR CONFIRMATION AS THE SECRETARY OF HEALTH AND HUMAN SERVICES. LETS EDUCATE AMERICANS ABOUT THE DANGERS OF ASBESTOS NOW!

An Open Letter to the new United States Secretary of Health and Human Services, Xavier Becerra

CONGRATULATIONS XAVIER BECERRA ON YOUR CONFIRMATION AS THE SECRETARY OF HEALTH AND HUMAN SERVICES.  LETS EDUCATE AMERICANS ABOUT THE DANGERS OF ASBESTOS NOW!

The following is an open letter to Xavier Becerra, the incoming United States Secretary of Health and Human Services, from Linda Reinstein on behalf of the Asbestos Disease Awareness Organization. 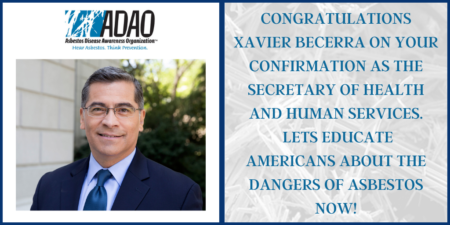 Congratulations on your confirmation as Secretary of Health and Human Services (HHS). We are incredibly proud to see someone with such a wealth of experience and a passion for protecting and safeguarding the health of all U.S. citizens, confirmed to such an important position.

As a Californian and the co-founder of the Asbestos Disease Awareness Organization — an independent nonprofit dedicated to preventing asbestos exposure and eliminating all asbestos-caused diseases — I appreciate and applaud your efforts to protect California residents and all fellow Americans from asbestos by drastically increasing the amount of transparency required from the American asbestos industry. Your hard work has not gone unnoticed.

ADAO is incredibly grateful for your recent support of the Alan Reinstein Ban Asbestos Now Act (ARBAN). For more than a century, asbestos has been known to cause suffering, diseases, and deaths. All forms of asbestos, including chrysotile, are carcinogenic to humans, and there is no safe level of asbestos exposure or controlled use of asbestos.

Over 40,000 Americans die each year from preventable asbestos-caused diseases. In fact, the United States Geological Survey recently reported that the United States imported an estimated 300 metric tons of raw chrysotile asbestos into the country, an increase of more than 30 percent from the prior year. Although Congress has not yet passed ARBAN, we are optimistic that the 117th Congress will get the job done and President Biden will sign the bill into law.

We are also optimistic that under your leadership, HHS will hold true to its mission of “enhanc[ing] the health and well-being of all Americans, by providing for effective health and human services and by fostering sound, sustained advances in the sciences underlying medicine, public health, and social services.”

We hope to meet with you soon to discuss how HHS can take the lead in educating the American public about the danger of asbestos exposure and how to prevent it. While we work on asbestos prevention, public policy, and rulemaking, we need a national asbestos educational campaign to raise awareness and promote prevention; as asbestos can be found in homes, schools, workplaces, and on consumer shelves. Knowledge is power.

Secretary Becerra, thank you for your unwavering leadership in protecting the health and safety of Californians and Americans from carcinogens. We look forward to working alongside you, the Surgeon General, Centers for Disease Control and Prevention, U.S. Food and Drug Administration, and the Agency for Toxic Substances and Disease Registry to advance asbestos prevention efforts throughout our nation.