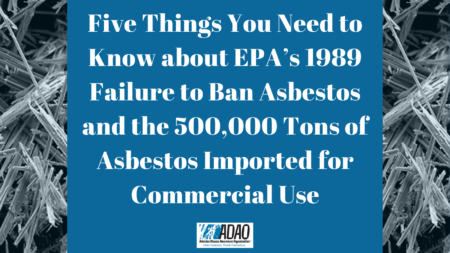 This year marks the 33rd anniversary of the last time the Environmental Protection Agency (EPA) attempted to ban asbestos, a known carcinogen, in the United States. Over three decades later, the toxin still kills over 40,000 Americans annually, and hundreds of tons are still imported and used every year. Below are the top five things you need to know about why we need legislation, not regulation when it comes to asbestos imports and use in the United States.

ONE: On July 12, 1989, EPA issued a final rule banning most asbestos-containing products.

However, due to chlor-alkali industry pressure and the desire to put profits over public health, this regulation was overturned just two years later in 1991 by the Fifth Circuit Court of Appeals in New Orleans. As a result of this decision, the 1989 asbestos regulation only bans new uses of asbestos after 1989 and bans the following specific asbestos-containing products: flooring felt, roll board, and corrugated, commercial, or specialty paper. Since 1989, U.S. companies have imported more than 500,000 tons of asbestos placing Americans at risk.

The remaining chlor-alkali companies that use asbestos to produce chlorine agree that the technology is antiquated and asbestos must be phased out over an extended period of time. Today, we urge Congress to put an end to this man-made disaster.

TWO: Nearly 70 other countries have already banned asbestos, but the U.S. lags behind.

In fact, the U.S. has already imported more asbestos in the first six months of 2022 than all of last year, and there’s no end in sight. Although asbestos is still legal and lethal in the country today, we have made some strides toward a ban. Over five years ago, on June 22, 2016, President Barack Obama signed the The Frank R. Lautenberg Chemical Safety for the 21st Century Act (“LCSA”) into action. This was a huge step forward after many years and several attempts to strengthen the Toxic Substances Control Act (TSCA). LCSA established a new integrated process for prioritizing chemicals, ensured risk evaluations on high-priority chemicals, and issued rules to eliminate unreasonable risks.

This bill not only bans all imports and use but provides life-saving education about the dangers of exposure. Following the 2022 introduction of ARBAN, ADAO testified in support of the bill during a Senate Hearing with other stakeholders. ARBAN has gathered huge stakeholder support, even industry agrees asbestos should be banned— they just want more time to do it. And there is hope, in the past two decades, industry has evolved from 17 chlor-alkali plants using asbestos technology down to just eight, owned and operated by only three companies.

Together our stories continue to advance prevention and policy efforts to end the man-made asbestos disaster. We share our stories during Congressional briefings, with the media, and throughout social media. If you need inspiration or motivation to share your story, read some of the amazing and heartfelt stories here. Submit your story here.

FIVE: We need to act now to ban asbestos.

Recent mortality reports indicate asbestos-related deaths are on the rise. That means that more than 40,000 Americans will die this year from preventable asbestos-caused illnesses. That’s 40,000 families grieving, 40,000 communities suffering. We know how to end this pain. Why have we not done it?

We encourage Congress to return to the negotiation table to get this landmark bill passed. To get involved: sign our change.org petition and join almost 150,000 other supporters, join in and share the discussion on Social Media, and join our Newsletter  and stay informed.

Together, we can make a difference.