During the week, IOSH, through its No Time to Lose (NTTL) campaign, provided many 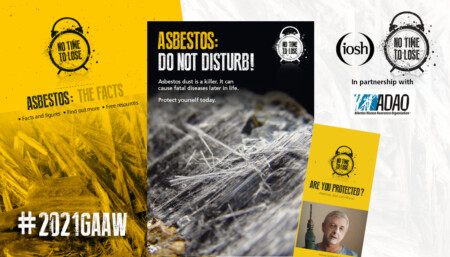 educational resources such as its eight steps to managing asbestos and shared real-life stories of people who have been affected by occupational cancer caused by exposure to asbestos at work. IOSH also encouraged organizations to support the campaign to help raise awareness of how to prevent occupational cancer and created a video with ADAO co-president Linda Reinstein and IOSH President Jimmy Quinn to bring attention to GAAW ‘21. The campaign had great engagement on social media and reached an audience of more than 550,000 online.

We are grateful to Earl Dotter who created the ever-evolving photo exhibit, “BADGES: A Memorial Tribute to Asbestos Workers,” memorializing the asbestos workers of the 20th century. Since 2015, Earl has dedicated his time to creating “BADGES”, which each year features different posters honoring those who have suffered from and fought asbestos.

We are also grateful to screenwriter and director Judd Apatow for honoring Warren Zevon, a musician who sadly passed away from mesothelioma, by releasing the exclusive record, “Warren Zevon’s Greatest Hits (According to Judd Apatow)” in 2020. The record was sold during “Record Store Day,” with a portion of proceeds benefiting ADAO’s art, advocacy, and education efforts.

The global reaction to GAAW ’21 has been truly remarkable, and we have created worldwide conversations on the dangers of asbestos. Our 2021 mantra “One Word, One Week, One World” has been realized and more people than ever are aware of the efforts of ADAO.

Together, our shared goals and ultimate objectives are:

As I reflect on the success of #2021GAAW, I am both amazed and encouraged. I am amazed by how far the core messages of GAAW and ADAO traveled, and I was encouraged to see tangible results from our combined efforts proving that our work is meaningful. This year’s Global Asbestos Awareness Week (#2021GAAW) marked 17 years of efforts from everyone at the Asbestos Disease Awareness Organization (ADAO) striving to raise awareness on the issue. More people than ever heard our message and, more importantly, have recognized the importance of sharing it with others.

As the sun set on GAAW ‘21, we gathered on Wednesday to light a candle of hope, remembrance, and strength for those who have been affected by asbestos.

If we continue to take action together, we will achieve our goals. To each of you who shared our educational resources, your own personal story, or the stories of other Warriors — we thank you!

We look forward to continuing the Global Asbestos Awareness Week conversation in 2022. Until then, remember: HEAR ASBESTOS. THINK PREVENTION.