IN LANDMARK WIN FOR PUBLIC HEALTH,  SETTLEMENT COMMITS EPA TO SEEK REPORTING ON ASBESTOS USE AND EXPOSURE UNDER TSCA

IN LANDMARK WIN FOR PUBLIC HEALTH,  SETTLEMENT COMMITS EPA TO SEEK REPORTING ON ASBESTOS USE AND EXPOSURE UNDER TSCA

Washington, D.C. — The Asbestos Disease Awareness Organization (ADAO) is deeply gratified that the Environmental Protection Agency (EPA) has finally agreed to require reporting on asbestos use and exposure under the 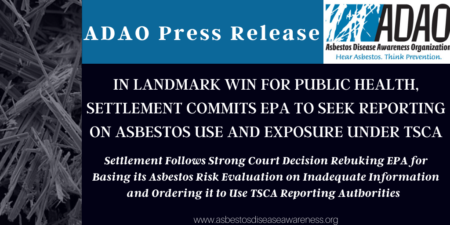 EPA’s commitment is embodied in a landmark June 7, 2021 settlement agreement that ends a long legal battle waged under Section 21 of TSCA after EPA had denied petitions seeking asbestos reporting in 2018.

“The Biden EPA deserves immense credit for acknowledging that we cannot effectively reduce the large ongoing toll of death and disease from asbestos unless we know how much asbestos is entering the country, where it is going, how it is used, and how many people are exposed to it,” Reinstein said.

The settlement implements the sweeping December 22, 2020 decision of Judge Edward Chen of the Northern District of California which determined that EPA petition denials were contrary to law, arbitrary and capricious.

Judge Chen’s opinion recognized that a lack of reporting has deprived EPA of the basic use and exposure information necessary to perform a sound risk evaluation on asbestos. He ordered the EPA to initiate rulemaking under TSCA’s reporting authorities. After initially contesting the Court’s decision, EPA has now accepted it and agreed to comply.

“In the long history of TSCA, this is the first case where the citizens’ petition provisions of Section 21 have been used successfully to obtain a court decision compelling EPA to initiate rulemaking it was unwilling to conduct,” said Bob Sussman, ADAO counsel.

“Section 21 was included in the law so citizens can hold EPA accountable for failing to use its TSCA authorities to address important public health concerns. It is good news for all of us that this remedy is working as intended and motivating EPA to do the right thing,” he concluded.

EPA acknowledged the information gaps on asbestos in its January 2021 Final Risk Evaluation on Asbestos after EPA’s Science Advisory Committee on Chemicals (SACC) criticized EPA for its inadequate understanding of asbestos use and exposure and failure to use its TSCA reporting authorities.

As EPA moves ahead with its Part 2 risk evaluation, ADAO believes the new reporting rule will assure that EPA has identified all ongoing uses of asbestos and can make science-based determinations of their risks.

Although many other countries have banned asbestos, most uses of asbestos are still lawful in the US. Over 40,000 Americans die annually due to asbestos caused illnesses.

The settlement agreement includes a schedule for proposing reporting requirements under section 8(a) of TSCA and taking final action. ADAO and its co-plaintiffs will be able to return to Court to compel compliance if EPA fails to meet the deadlines in the schedule.

Consistent with the Court’s decision, EPA’s proposed rule will require companies to report imports of raw asbestos and articles and mixtures containing asbestos and identify and describe how these materials are used and processed. Reporting will include mixtures and articles in which asbestos is present as an impurity, such as talc-based consumer and industrial products contaminated with asbestos.

Alongside ADAO, ten States and the District of Columbia also petitioned EPA to require asbestos reporting and filed suit when their petition was denied. This suit and the ADAO suit were consolidated and decided together. ADAO and its co-plaintiffs greatly appreciate the strong support of the states throughout the administrative and judicial process.

ADAO continues to work towards a complete ban on asbestos imports and use. Preventing asbestos from entering the country and killing thousands every year remains the goal of ADAO.

Learn more about the two and half year legal process.