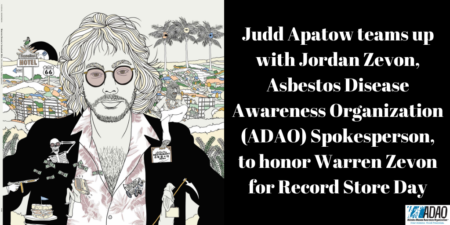 UPDATE: Due to the coronavirus, Record Store Day has been rescheduled for June 20, 2020. To bring us all together, we are incredibly excited to announce that Jordan Zevon, ADAO spokesperson and son of musician Warren Zevon, will entertain us by showcasing some of his father’s music. Keep your eyes peeled for an announcement regarding Jordan’s performance!

In honor of legendary musician Warren Zevon — who passed away from mesothelioma in 2003 — comedian, actor, writer and filmmaker Judd Apatow has curated his personal Warren Zevon “Greatest Hits” collection, a vinyl-only release for “Record Store Day” on June 20, 2020. The day, which is an annual international event that salutes the enduring spirit of brick and mortar record stores, is near and dear to the heart of our National Spokesperson, Jordan Zevon, son of the late Warren Zevon. Jordan grew up working in several record stores before eventually opening his own, “Summit Records.”

“I was blown away when Judd and Rhino Records approached me about this release,” said Jordan. “What really sent this honor and experience over-the-top was when everyone involved agreed to donate a portion of the proceeds from Apatow’s Zevon album to the Asbestos Disease Awareness Organization.”

The album includes thirteen of the late Zevon’s most beloved tracks, according to Apatow. It opens with the 1976 song “Carmelita” and also features live takes of “Werewolves of London” and “The French Inhaler.” Side A of the compilation finishes with a cover of “Something Bad Happened to a Clown,” recorded by Taylor Goldsmith from the band “Dawes”, along with high school friend and well respected producer, writer, and performer, Blake Mills.

“Warren Zevon’s honesty, wit, and storytelling has been a major inspiration in my work,” Judd Apatow wrote for the album’s liner notes. “He is my north star. He reminds me to go deep. His music is fun, dark, and deeply emotional all at the same time.” In 2013 Apatow also told KCRW, a Los Angeles radio station, that meeting the songwriter changed a lot of his philosophy about his own work. “I learned an important lesson just by the searing look in his eyes: Never compromise what you are trying to express,” Apatow writes. “Your work is yours; no one understands it more than you. Don’t water it down. Don’t sell out. It was all in that look.”

For this effort, among many other reasons, ADAO will be honoring Apatow at the upcoming International Asbestos Awareness and Prevention Conference with the “Warren Zevon Keep Me In Your Heart Award.” The annual conference, held this year from April 3-5 in Washington, D.C., will recognize Apatow along with a number of other leaders, both public and private figures, who have lent their platform, expertise, voice, and/or advocacy to the asbestos crisis.

As record store day approaches, we encourage you to stop into your local record store in search of Apatow’s version of Warren Zevon’s Greatest Hits, and support ADAO in order to ban asbestos and save hundreds of thousands of American lives.

Together, through art and advocacy, we are making a difference.

Judd Apatow, one of the most sought-after comedic minds in the industry, has directed, produced and written many of the biggest comedy films and hit TV shows of the last two decades. Apatow’s next feature The King of Staten Island, starring Pete Davidson, Marisa Tomei and Bill Burr, is inspired by events from Davidson’s own life. Apatow directed and produced the film, which will be released by Universal Pictures on June 19, 2020, and co-wrote the script alongside Davidson and Dave Sirus. Previous director credits include The 40-Year-Old Virgin, Knocked Up, Funny People, This is 40, Trainwreck, and May It Last: A Portrait of the Avett  Brothers (with co-director Mike Bonfiglio). His Netflix comedy special Judd Apatow: The Return, marked his comeback to the stage after a 25 year hiatus.