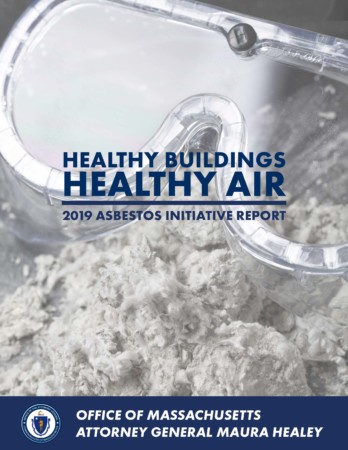 AG Healy’s “Healthy Buildings, Healthy Air” initiative underlines both the importance of the Right to Know where asbestos is imported and used in the United States and the necessity of documenting where legacy asbestos exists in buildings around the country, both of which are addressed in ARBAN.

Once passed, ARBAN would:

AG Healy’s commitment to keeping the people of Massachusetts safe from the risks of environmental hazards like asbestos has not gone unnoticed by those fighting to ban asbestos in the United States. She helped secure judgments for violations of asbestos laws totaling more than $3.4 million in penalties in addition to court orders requiring proper asbestos abatement, license forfeiture by unqualified asbestos contractors, additional training requirements for contractors, property audits, and public service announcements. And following a report issued by Senator Edward Markey identifying deficiencies in the efforts by schools across the country to gather and make available information about asbestos maintenance in the manner the Asbestos Hazard Emergency Response Act (AHERA) requires, AG Healy immediately convened a stakeholder group of school organizations and state agencies to figure out solutions to improve monitoring and maintenance of asbestos in Massachusetts schools.

AG Healy also led 15 states in petitioning EPA to close loopholes in the reporting required of manufacturers and importers of asbestos products and sued EPA when it failed to close the loophole. This lawsuit helped support one filed by ADAO about the public’s right to know where asbestos is imported and used.

ARBAN is soon heading to the floor of the U.S. House of Representatives for a vote, where we expect it to pass with strong bipartisan support. Towards the end of last year, ARBAN was cleared by the House’s Committee on Energy and Commerce with a bipartisan vote of 47-1, and we expect to see that reflected in the full House floor vote.

The bill is an amendment to the  Toxic Substances Control Act (TSCA), and therefore would not apply to cosmetics, which are not subject to TSCA and are instead within the jurisdiction of the FDA. ARBAN only applies to asbestos imports, manufacturing, processing, use and distribution in commerce that are regulated under the Toxic Substances Control Act (TSCA). The asbestos definition in ARBAN is not intended to influence the actions FDA takes to address talc cosmetic issues.

ADAO is actively supporting the three cosmetic bills that are progressing through Congress now. We believe these bills can be strengthened so they more effectively address asbestos contamination from talc, and we plan to continue using the strength of our movement to advance and improve them.

We at ADAO would like to extend our deepest gratitude to AG Healy and her continued support in the fight to ban asbestos once and for all in the United States. Together, we can make a difference.