Report: After Years of Decline, Asbestos Imports Nearly Doubled in 2016 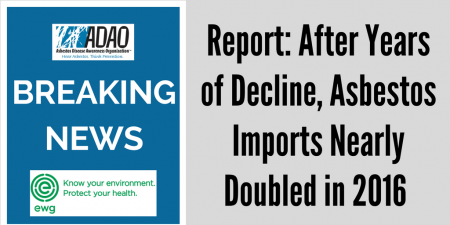 WASHINGTON – The Asbestos Disease Awareness Organization, an independent nonprofit dedicated to preventing asbestos exposure – along with the Environmental Working Group, a consumer advocacy group that empowers people to live healthier lives in a healthier environment – released a statement in response to new data showing asbestos imports nearly doubled in 2016, after years of decline.

Data from the Department of Commerce and the U.S. International Trade Commission estimates that 705 metric tons of raw asbestos were imported last year, compared to 343 metric tons in 2015. The U.S. Geological Survey reported asbestos imports came from Brazil and Russia. The only remaining user of raw asbestos in the U.S. is the chloralkali industry, which uses it to “manufacture semipermeable asbestos diaphragms.”

Much of the surge in imports in 2016 came in the fourth quarter of the year, following the passage of the revamped Toxic Substances Control Act, or TSCA. Lobbyists from the American Chemistry Council, on behalf of the chloralkali industry, are now pushing for an exemption from the new chemical safety law that would allow it to continue to import and use asbestos just as it does today.

The EPA is currently in the process of implementing TSCA, an overhaul that gives the agency broader authority to ban toxic chemicals, and under which asbestos is being evaluated for regulation.

“Opponents of an asbestos ban have long argued that asbestos use is shrinking in the United States, but now we know just the opposite is true,” said Linda Reinstein, president and co-founder of the Asbestos Disease Awareness Organization. “Each year, asbestos-caused diseases claim the lives of 15,000 Americans. It is shocking that unlike more than 60 nations around the world, the U.S. has not only failed to ban asbestos, but its use is increasing dramatically. The EPA needs to ban asbestos with no exceptions. There is no safe or controlled use of asbestos in mining or manufacturing.”

“The chloralkali industry’s insistence on the continued use of deadly asbestos is reprehensible,” said EWG President Ken Cook. “Meanwhile, we shut our eyes to the communities in Brazil and other asbestos-producing nations, where miners and their families are exposed to this killer.”

“It is incredulous that, in the face of such harrowing facts, the chloralkali industry continues to peddle their ‘safe use’ propaganda to the EPA, the public, and their shareholders,” said Dr. Richard Lemen, former assistant U.S. surgeon general and current co-chair of the Asbestos Disease Awareness Organization’s science advisory board. “If the EPA does not put a stop to this environmental and public health disaster now with a complete asbestos ban, more innocent Americans will die preventable deaths due to bureaucratic inaction.”

ADAO will be holding a Congressional Staff Briefing on September 26 at noon to discuss increased asbestos imports and its impact on public health and the environment.

The Asbestos Disease Awareness Organization is a global leader in combining education, advocacy, and community initiatives to prevent and end asbestos exposure. ADAO seeks to raise public awareness about the dangers of asbestos, advocate for an asbestos ban, and protect asbestos victims’ civil rights. ADAO, a registered 501(c)(3) nonprofit organization, does not make legal referrals. For more information, visit www.asbestosdiseaseawareness.org.

About the Environmental Working Group

The Environmental Working Group’s mission is to empower people to live healthier lives in a healthier environment. With breakthrough research and education, we drive consumer choice and civic action. EWG is a nonprofit, nonpartisan organization dedicated to protecting human health and the environment. More information is available at www.ewg.org.