Skip to content
Home/Blog/Protect Your Family: What You Need to Know About Legacy Asbestos that Can Still be Found in Your Homes, Schools, and Workplaces and on Consumer Shelves

Protect Your Family: What You Need to Know About Legacy Asbestos that Can Still be Found in Your Homes, Schools, and Workplaces and on Consumer Shelves 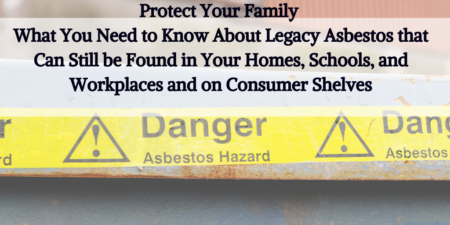 Asbestos-contaminated products are still imported into the United States and found in homes, schools, buildings, and on consumer shelves throughout the country.

Many Americans falsely believe asbestos has already been banned in this country or may think asbestos no longer poses a threat, but they are wrong.  Asbestos is a known carcinogen that causes deadly diseases such as mesothelioma, lung and ovarian cancers, and asbestosis, and more. A mountain of evidence confirms, there is no safe level of exposure. As fires burn across the west hurricanes hit the south with increased frequency, and extreme weather events cause destruction,  American citizens and especially first responders and firefighters are at high risk of being exposed to legacy asbestos.

But what is legacy asbestos? Despite it being a threat to millions of people in the United States, very few know and understand what it is. So we’re here to explain.

Legacy asbestos is any asbestos that was used in either the construction of buildings or the manufacture and use of products, machinery and equipment, and is now in place in homes, factories and other structures. For example, legacy uses include asbestos-containing insulation or spray and lead pipes that were put in place during the past century and before asbestos was recognized as a health hazard.

Furthermore, asbestos-containing materials, such as brake pads and gaskets, are still being manufactured and sold in the United States and present new threats.

How are we exposed to it?

Exposures can occur in homes, schools and workplaces during renovations, repairs and demolition of structures; in factories or other places where asbestos-containing machinery and equipment is used; and during explosions, fires, hurricanes, tornadoes, earthquakes.and other natural disasters in which asbestos fibers are released to the atmosphere and asbestos-containing  debris from collapsing or destroyed structures must be disposed of.

Legacy Asbestos in Homes, Schools, Buildings, and on Consumer Shelves

According to the Cleveland Clinic, “any building built before the 1970s could contain asbestos, especially old houses and offices from the first half of the last century.”

And because there has not been a comprehensive study of where  legacy asbestos may lurk, it is impossible to know when extra precautions are necessary.

Homes, workplaces, commercial buildings are all potentially contaminated, but schools also present a major risk. School teachers and janitorial staff are considered among high-risk groups for asbestos-caused diseases because many schools were built with and contained asbestos-containing materials (ACMs) that have become friable (easily release asbestos fibers through normal use) over the years.

According to the 2018 Environmental Protection Agencies (EPA) Office of Inspector General (OIG) Report, “substantial amounts of asbestos, particularly in sprayed form, have been used in school buildings, especially from 1946 through 1972. More than 50 million students from kindergarten through 12th grade attend more than 131,000 public and private school facilities in the United States, and more than 7 million teachers and others work in those schools.”

Older schools, built before the 1980s, pose the biggest threat. The OIG reports that “asbestos in older schools can be commonly found in vinyl floor tiles, vinyl sheet flooring and adhesives; textured paint and patching compounds used on walls and ceilings; and insulation on hot water and steam pipes.” Students and school staff members can be exposed to asbestos when fibers are released into the air through “product use, demolition work, building maintenance, and repair and remodeling.”

Is it also found in products?

Yes. The use of asbestos-containing products occurs across a number of industries. Most of the products could be categorized as machinery, equipment, construction materials and automotive parts; although we also find asbestos contamination in makeup and other consumer products.

Some of the most common asbestos products:

Why did we use asbestos-containing materials?

Until the 1800s, people mainly used asbestos to make fireproof cloth in small amounts. Then during the Industrial Revolution, great demand arose for a material that could insulate steam engines. At the same time, the technology was developed to easily mine asbestos and combine it with other materials.

Asbestos boiler insulation was developed in the 1820s. Later, just before the Civil War, the first patent for asbestos roofing shingles was awarded to Henry Ward Johns. His company would go on to become Johns-Manville, the original titan of the asbestos industry.

During the 20th century, demand for asbestos products was propelled further by the shipbuilding efforts of World War II and the postwar building boom. U.S. asbestos consumption rocketed from 2,820 tons in 1905 to 803,000 tons in 1973. Many veterans were exposed to asbestos during both their military service and their civilian careers.

Currently, the U.S. chlor-alkali industry continues to import asbestos for use in chlorine production, even though safer alternatives are available. In 2018, America imported 750 tons of asbestos.

What can we do?

Quite simply: It’s time to ban asbestos, just like more than 70 countries around the world have.. But we must also protect against the threat from legacy asbestos. That’s why the Alan Reinstein Ban Asbestos Now Act (ARBAN) of 2019 would require the National Academy of Sciences (NAS) to conduct a comprehensive study of risks presented by “legacy” asbestos used in millions of residences, businesses, factories, public buildings, and schools around the country. This would allow us to map the threat of potential exposure and deal with it safely.

The bill would also establish a new Right-to-Know program to require current importers, processors and distributors to report and disclose to the public how much asbestos is in U.S. commerce, where and how it is used, and who is exposed. This is another critical piece of information needed to keep Americans safe.

Asbestos is still imported to the U.S. in large quantities.  Many of the ports that are used to import asbestos are located right in the path of natural disasters and threaten their surrounding communities. We need a bill that addresses both legacy asbestos and continued asbestos imports. ARBAN is that bill.

We urge Congress to pass this life-saving bill and ban asbestos in the United States once and for all. It is past time we join the other nearly 70 countries who have banned the toxic substance.