Skip to content
Home/Blog, Legislative/U.S. Senate and House of Representatives Introduced The Alan Reinstein Ban Asbestos Now Act of 2019 (ARBAN) — Bill Would Ban Asbestos Importation and Use Within One Year of Enactment

U.S. Senate and House of Representatives Introduced The Alan Reinstein Ban Asbestos Now Act of 2019 (ARBAN) — Bill Would Ban Asbestos Importation and Use Within One Year of Enactment 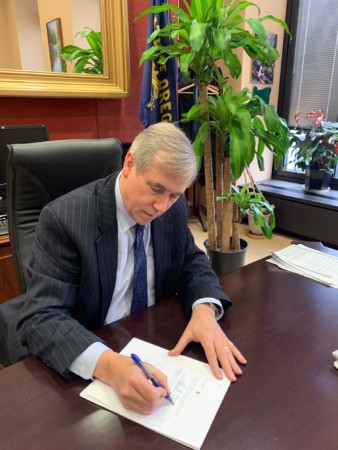 I’m honored to have the bill named after my late husband, Alan, but this is about the hundred’s of thousands of Alan’s who have been diagnosed or died from preventable asbestos-caused diseases.

The updated Alan Reinstein Ban Asbestos Now Act will save lives by banning asbestos use and importation, without exceptions or exemptions. The four major differences from last year are: 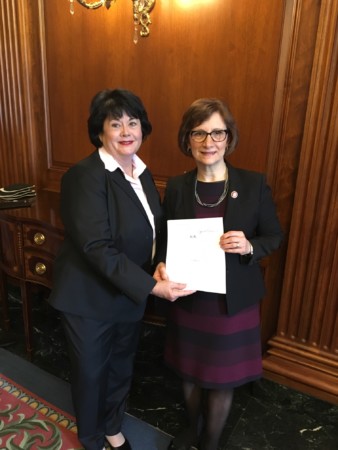 “It’s outrageous that in the year 2019, asbestos is still allowed in the United States,” said Senator Jeff Merkley. “While the EPA fiddles, Americans are dying. It’s time for us to catch up to the rest of the developed world, and ban this dangerous public health threat once and for all.”

“Asbestos causes disease and death, and we must protect families and communities from this known carcinogen,” said Congresswoman Suzanne Bonamici. “It is unacceptable that Oregonians and thousands of people across the U.S. continue to die from asbestos-related diseases each year. I am proud to introduce the Alan Reinstein Ban Asbestos Now Act, legislation to ban the importation, manufacture, and distribution of asbestos. I thank my colleagues, Senator Jeff Merkley and Chairman Frank Pallone, and look forward to continuing working with them to advance this lifesaving bill.”

“It’s long past time to ban asbestos and honor those who fought so hard to bring the dangers forward,” shared former Senator Barbara Boxer.

This bill comes at a critical time as current research estimates that nearly 40,000 Americans die annually as a result of asbestos-caused diseases. Scientists agree that there is no safe level of exposure to asbestos.

Despite these facts, raw asbestos imports by the Chlor-Alkali industry – the nation’s largest asbestos importers – continue unabated. These plants have been increasing their asbestos imports in recent years even though alternative asbestos-free processes are economically viable and widely used in Europe.

Asbestos isn’t just limited to homes and buildings. Asbestos contamination can be in the most unlikely places. In fact, U.S. Food & Drug (FDA) warning that “tests confirmed the presence of asbestos in three of the product samples of cosmetics collected from Claire’s and one of the product samples collected from Justice.” Other recent tests have shown asbestos in children’s crayons.

ADAO counsel and former senior EPA official under Presidents Clinton and Obama, Bob Sussman explained why this bill is so important: “This comprehensive and uncompromising legislation will finally close the door to the mining, importation, processing and distribution in commerce of asbestos and asbestos-containing products. EPA started down this road 30 years ago but an unfortunate court decision blocked its path. Congress tried to fix the Toxic Substances Control Act (TSCA) so EPA could ban asbestos but the Trump EPA is not up to the task. It’s time for Congress to finish the job.”

“It’s hard to imagine an easier piece of legislation to support than a proposal banning any future importation and use of asbestos,” said EWG President Ken Cook. “There have been times when parts of the U.S. Capitol building have been shuttered in order to remove the deadly substance so members of Congress would not be exposed. Now it’s time for our elected leaders to take action of their own so asbestos can never again be imported and used in the U.S.”

Asbestos Victim, Ann Samuelson shared, “I am so incredibly grateful that Congresswoman Bonamici and Senator Merkley who are stepping up with ADAO to save lives by banning asbestos imports and also giving the public the right to know where asbestos is in their communities by supporting the Alan Reinstein Ban Asbestos Now Act of 2019. legislation.”

This has been a landmark week with the passage of the 15th Asbestos Awareness Week Resolution and the introduction of ARBAN. While this is certainly a moment worthy of some celebration, we must not forget that it is by no means the finish line. ARBAN must still go through the traditionally long series of House and Senate hearings and markups before it even receives a vote. Thankfully, there is still plenty that you can do to make sure that ARBAN does get a vote. Call your U.S. Senators and Representatives to tell them you support ARBAN and urge them to support the bill too. You can also use social media to share ADAO’s blogs, share your story, and share with the world why ARBAN matters to you. Finally, make your voice heard during Asbestos Awareness Week (April 1-7) and at ADAO’s 15th annual Asbestos Awareness and Prevention Conference (April 5-7) in Washington D.C.

Together, we make change possible.