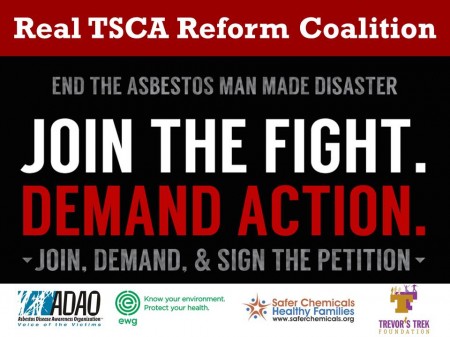 “The mere fact Congress is now moving forward with overhauling the failed federal TSCA law is welcome news,” Reinstein said. “However, unless the final legislation gives the Environmental Protection Agency the authority to fast-track a ban of asbestos, among other toxic chemicals, the American people will continue to be at risk. As a mesothelioma widow, it is reprehensible asbestos remains legal and lethal in the USA today.”

“The American people deserve a proposal from Congress that goes the distance to protect public health and not just the interests of the chemical industry, ” said Andy Igrejas, director of Safer Chemicals, Healthy Families.

“Congress has a choice to make that likely won’t come again for decades,” said Alex Formuzis, VP for strategic campaigns at EWG Action Fund. “It can adopt chemicals reform legislation embraced by industry that will continue to leave millions of Americans at unnecessary risk from toxic chemicals, or it can support a proposal that gives the EPA the tools and resources to protect our families.  For decades, the American people have been exposed to thousands of different toxic chemicals associated with a number of serious health problems, like cancer and neurological disorders, among others. Congress can finally right this ship by passing a TSCA reform bill that puts toxic chemicals, not public health, in its crosshairs.”

“The overall rates of cancer among children and other childhood diseases, such as autism and asthma, are rising dramatically. There is mounting evidence that toxic pollutants and untested chemicals play a pivotal role in causing these chronic illnesses in children,” said Trevor Schaefer, a brain cancer survivor and founder of Trevor’s Trek Foundation. “I envision a world in which children no longer have to suffer from preventable diseases that are related to the air they breath, the food they eat, the water they drink and the dirt in which they play. For the sake of our children, I urge Congress to pass a true TSCA reform law so parents no longer have to ask, why did this happen to my child?”

Legislation introduced by Sens. Edward Markey (D-Mass.) and Barbara Boxer (D-Calif.) and named after Trevor Schaefer and Reinstein’s late husband Alan, who died in 2006 after a long battle with mesothelioma, is backed by the vast majority of environmental and public health organizations, including the coalition.The Markey-Boxer plan would require that chemicals be safe, set clear deadlines for EPA action, give the agency the resources it needs, preserve a role for states to protect their citizens from chemical exposures and provide an expedited process to ban asbestos. For an in-depth analysis of the Alan Reinstein and Trevor Schaefer Toxic Chemical Protection Act, click here.

The coalition has launched a joint petition to build public support for the strongest possible TSCA reform proposal.  Specifically, the petition calls for:

To learn more about TSCA reform, the recently proposed congressional legislation, and how to make your voice heard, please reference ADAO’s previous relevant blogs listed below.