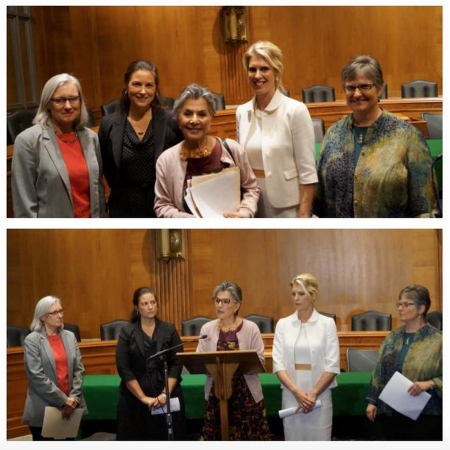 Dr. Laura Welch, will be speaking out on behalf of ADAO in opposition to chemical-industry aligned S.697, The Frank R Lautenberg Chemical Safety for the 21st Century Act, proposed by David Vitter (R-LA) and Senator Tom Udall (D-N.M.), for its weak language and inability to protect American families from toxic chemicals.

In contrast, the Alan Reinstein and Trevor Schaefer Toxic Chemical Protection Act, proposed by Senator Barbara Boxer (D-CA), Ranking Member of the Environment and Public Works Committee (EPW), and Senator Edward J. Markey (D-MA), Ranking Member of the Subcommittee on Superfund, Waste Management, and Regulatory Oversight, provides an appreciated alternative to the Udall-Vitter toxics bill. Instead, the Boxer-Markey bill utilizes powerful language to focuses on protecting families from over 80,000 hazardous chemicals, including the known carcinogen – asbestos. The Boxer-Markey bill is named after Alan Reinstein, late husband of ADAO President and Co-Founder, Linda Reinstein, and brain cancer survivor, Trevor Schaefer. Alan passed away in 2006 at the age of 66 from mesothelioma, a disease often associated with exposure to asbestos.

ADAO’s Linda Reinstein also spoke on March 17, 2015, at the Senator Barbara Boxer (D-CA) and Senator Edward J. Markey (D-MA) press conference making a statement on the urgent need to pass a toxic chemical reform bill that is stronger than current law to protect children and communities from the dangers of toxins.

ADAO’s Science Advisory Board (SAB) co-chairs Arthur L. Frank, PhD, MD, and Richard Lemen, PhD, along with SAB Member, Barry Castleman, ScD, all speak out against the Udall-Vitter bill stating that the proposed legislation undermines states constitutional right to circumvent what is often dated federal law and better protect its residents from harmful chemicals including asbestos.

For those of you who would like to speak out for real toxic chemical reform please sign the “Say No to Toxic Chemicals” Petition and call your congressional representative today! 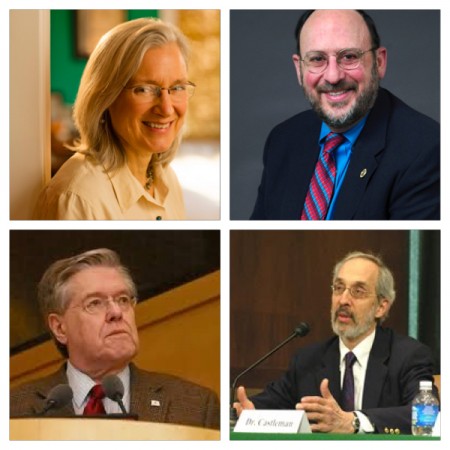 Below, four asbestos experts including three of ADAO’s own Science Advisory Board members, quote their thoughts on the Vitter-Udall bill:

“The Vitter bill is an unprecedented retreat from historic US efforts to make progress in protection of public health and the environment.  It would allow an industry-friendly administration in Washington to block state-level advances in toxic substances control.  It is preposterous that US legislators who are so enamored of “states’ rights” in other contexts would be willing to prevent the states from demonstrating the feasibility of improved legal protections for the environment.  In contrast, a recent Supreme Court case in Brazil upheld the right of states to ban asbestos, ruling that the constitutional right to protection of health and the environment is consistent with states doing more than the federal government in that regard.  The Vitter bill is a sell-out to powerful business interests by Members of Congress.  There is no justification for this unprecedented pre-emption of US states in protecting their people.”

Barry Castleman, ScD is an Environmental Consultant trained in chemical and environmental engineering. He holds a Doctor of Science degree from the Johns Hopkins School of Public Health. He has been a consultant to numerous agencies of the US government and other governments, international bodies, and environmental groups dealing with a wide range of public health issues. He has testified as an expert in civil litigation in the US on the history of asbestos as a public health problem and the reasons for failure to properly control asbestos hazards. Dr. Castleman has spent the past 40 years working on asbestos as a public health problem.

“The Vitter-Udall bill will not adequately protect Americans from the risk of chemicals. Our country needs a stronger bill with better protection and more rapid assessment of chemical hazards . States need to be able to be more vigorous in protecting people than what may come from the Federal government. Finally, after years of being a world follower regarding asbestos we need to move quickly on banning the continuing use of this cancer cursing material.”

Arthur L. Frank, PhD, MD is a physician board certified in both internal medicine and occupational medicine and currently is co-chair of ADAO’s Science Advisory Board as well as Professor of Public Health and Chair of the Department of Environmental and Occupational Health at the Drexel University School of Public Health in Philadelphia. He is also a Professor of Medicine (Pulmonary) at the Drexel College of Medicine. He also holds a position at Drexel as Professor of Civil, Architectural and Environmental Engineering. A life-long academic, Dr. Frank has previously taught at Mount Sinai, the University of Kentucky and in the University of Texas System. He has served many governmental agencies in the US and has carried out research and has been a governmental advisor internationally. His research interests have been in the areas of occupational cancers and occupational lung diseases, as well as agricultural safety and health. For thirty-seven years he held a commission in the U S Public Health Service (active and inactive) and served on active duty both at the NIH and at NIOSH.

“It is unconscionable that a major bill, the Udall/Vitter Senate Bill 697, addressing toxic substances in the United States does not ban asbestos, one of the most toxic substances ever used by American industry. Each day in the U.S. at least 30 people still die as a result of its past use due to its highly toxic nature while over 50 other countries around the world have already banned its use in their countries, including the entirety of the European Union, yet it can still be used in commercial products sold in the United States. There is no essential use for asbestos in the U.S. today and anyone promoting this notion has not been honest to the American public.”

Richard Lemen, PhD is a former Assistant Surgeon General of the United States and also served as the Acting Director and the Deputy Director of the National Institute for Occupational Safety and Health before his retirement. He has been a practicing epidemiologist for more than forty years, and has taught graduate level courses on environmental and occupational health issues, including asbestos, at the Rollins School of Public Health at Emory University. He has also testified on behalf of asbestos victims; Dr. Lemen is a world-renowned author, speaker, and lecturer on this topic.

Laura Welch, MD – Medical Director for the Center for Construction Research and Training

“Any real reform to TSCA must specifically name asbestos and direct the EPA to swiftly move toward a ban on all forms of asbestos in the US.  The Vitter/Udall bill does not specifically include this ban, is not strong enough to ensure that it happens. It must be changed to do so. Asbestos, in all its different fiber types, causes cancer in humans, and even very low levels of exposure to asbestos increase the risk of cancer.  National and international organizations agree and many have called for a ban on asbestos in the US.   Asbestos has been banned in more than 50 countries, and in those countries safer, cost-effective substitute materials have been successfully introduced for the many applications of asbestos.  Yet the US had not yet instituted a comprehensive ban on asbestos. TSCA is an important law, and needs to be strengthened and improved.  Ensuring asbestos is banned will protect children and other vulnerable populations from cancer caused by asbestos.  The Vitter/Udall bill should not move forward without including this ban.”

Laura Welch, MD is Medical Director for the Center for Construction Research and Training, a research and development institute affiliated with the Building and Construction Trades of the AFL-CIO, and professorial lecturer in the Department of Environmental and Occupational Health at George Washington University. She previously held full time faculty positions at the Albert Einstein, Yale and George Washington University Schools of Medicine. She is the author of over 100 peer-reviewed publications, abstracts and technical reports and has served as a consultant to many federal agencies, including OSHA, NIOSH, CDC and the NIH as well as serving in leadership roles for APHA and AOEC. She has worked with several union-management committees on health and safety issues, including United Auto Workers-Boeing, the American Association of Railroads-United Transportation Union and SMOHIT, the labor-management trust of the sheet metal industry.   She frequently provides occupational medicine expertise to the AFL-CIO, including working with the AFL on a proposed Senate bill to establish a trust fund and program for compensation of asbestos-related diseases (2003-4). As CPWR’s Medical Director she manages two nationwide medical screening programs for construction workers. She has served as an expert for the Asbestos Creditors Committee in several asbestos bankruptcy hearings, and has testified as an expert for individuals with asbestos-related diseases.

To learn more about TSCA reform, the recently proposed congressional legislation, and how to make your voice heard, please reference ADAO’s previous relevant blogs listed below.