Skip to content
Home/Blog/Senators Merkley, Daines, and Tester, Remain at the Forefront of Protecting Americans from Asbestos Related Diseases

Senators Merkley, Daines, and Tester, Remain at the Forefront of Protecting Americans from Asbestos Related Diseases 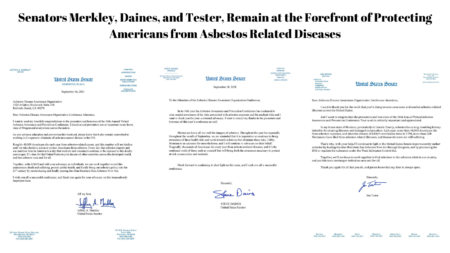 The Asbestos Disease Awareness Organization (ADAO) sincerely thanks Senators Merkley, Daines, and Tester for their letters to the 16th Annual International Asbestos Awareness and Prevention Virtual Conference attendees. We know that it made a huge difference to the attendees to see the devotion that Congressional members have to banning this known carcinogen from our country. We are so grateful that the three Congress members took the time to write the letters for our attendees.

As stalwart champions, Senators Merkley, Daines, and Tester sent ADAO supportive letters for our conference and reiterated their commitment to banning asbestos in the United States through the Alan Reinstein Ban Asbestos Now Act (ARBAN).

Senator Tester has annually ensured the annual Asbestos Awareness Week (April 1-7) Resolution passes to advance education and prevention in Montana and throughout the nation. In his letter, Sen. Tester remarked, “In my home state of Montana, particularly in Lincoln County, asbestos has a long, troubling history linked to devastating illnesses and damaged communities. Each year, more than 40,000 Americans die from asbestos exposure, and since the closure of Libby’s vermiculite mine in 1990, more than 200 Montanans have died from asbestos related illnesses, and thousands more are still suffering. That’s why, with your help, I’ll continue to fight in the United States Senate to permanently outlaw asbestos by leading the Alan Reinstein Ban Asbestos Now Act through Congress, and by pressuring the EPA to regulate the substance under the Toxic Substance Control Act.”

Senator Daines, who has worked hard to make asbestos awareness and prevention a bipartisan issue, stated in his letter, “Montanans know all too well the dangers of asbestos. Throughout the year but especially throughout the month of September, we are reminded that it is imperative we continue to bring awareness of these health risks and work towards solutions that eliminate these risks. Libby, Montana is an epicenter for mesothelioma, and I will continue to advocate on their behalf. Tragically, thousands of Americans die every year from asbestos-related diseases, and it’s the continued work of those such as yourself that will bring forth the awareness necessary to protect at-risk communities and residents.”

Senator Merkley, a long-time champion of ARBAN, stated, “As you advance education and prevention this weekend, please know that I also remain committed to working in Congress to eliminate all asbestos-caused disease in the U.S.

Roughly 40,000 Americans die each year from asbestos-related causes, and this number will not decline until we take decisive action to protect Americans from asbestos. Every day that asbestos imports and use continue here in America is a day that workers and consumers continue to be exposed to this deadly carcinogen. It’s time for the United States to join dozens of other countries across the developed world, and ban asbestos once and for all.

Together, with ADAO and with your advocacy as individuals, we can work together to end this unnecessary death and suffering, protect public health, and finally bring our asbestos policy into the 21st century by reintroducing and finally passing the Alan Reinstein Ban Asbestos Now Act.”

To see these Senators redeclare their dedication to the fight against asbestos meant a lot to asbestos victims in Libby and throughout the nation and their families who attended our conference, as well as the experts, scientists, and advocates who were there to discuss recent advancements in prevention and policy.

We were excited to share with ADAO conference attendees that Senator Merkley is once again working on legislative text for the 2021 ARBAN bill that would ban asbestos with language similar to the 2019 ARBAN that was introduced and won bipartisan support in the House last year. Senator Steve Daines is in discussions with Senator Merkley on the 2021 discussion draft. We are incredibly excited to see this issue come back to the forefront of the Congressional discussion, as we know that this is an issue members on both sides of the aisle can get behind.

An asbestos ban bill would help save the over 40,000 lives lost each year to asbestos-caused diseases in the United States. Last week, we sent an open letter to Senators Merkley and Daines, thanking them for their leadership and collaboration on the draft legislation to ban commercial importation and use of asbestos, and urging them to reintroduce the bill this year. The letter is signed by a broad group of unions, public health and environmental organizations, and leading asbestos scientists.

We have known that asbestos is a carcinogen for decades, and there has been scientific proof that it causes deadly cancers such as mesothelioma and cancers of the lung, larynx, and ovaries since the 1960s. However, asbestos is still legal and lethal in the United States. We are grateful to Senator Merkley and Daines for their leadership to protect Americans from asbestos exposure. We simply cannot wait any longer for this known carcinogen to be banned in the United States.

The letters were seen by many people, and boosted the hopes of those of us who have been fighting for an asbestos bill for decades. The Senators’ letters also appeared in our conference program, which we continue to share in the wake of the successful weekend.

Thank you again to Senators Merkley, Daines, and Tester not only for the letters for our conference attendees, but for their leadership and dedication to help save lives and protect public health for all Americans.