Skip to content
Home/Blog/ADAO’s Art and Advocacy: New Political Cartoons Highlight the Chlor-Alkali Industries Imports and Use that Impact Public Health and Need for Asbestos Ban

ADAO’s Art and Advocacy: New Political Cartoons Highlight the Chlor-Alkali Industries Imports and Use that Impact Public Health and Need for Asbestos Ban

There is nothing more powerful than art that speaks to a crisis. Purposeful art can impact people in a way that mere words cannot. That is why art has always been an important tool for ADAO’s education, advocacy, and community efforts.

In 2016, ADAO worked with cartoonists Dr Jack and John Curtis from South Africa on illustrations that depicted the hundreds of thousands of deaths caused by asbestos in the decades since scientists discovered that asbestos was a deadly carcinogen that causes mesothelioma, asbestosis, and cancers of the lung, larynx, and ovaries. 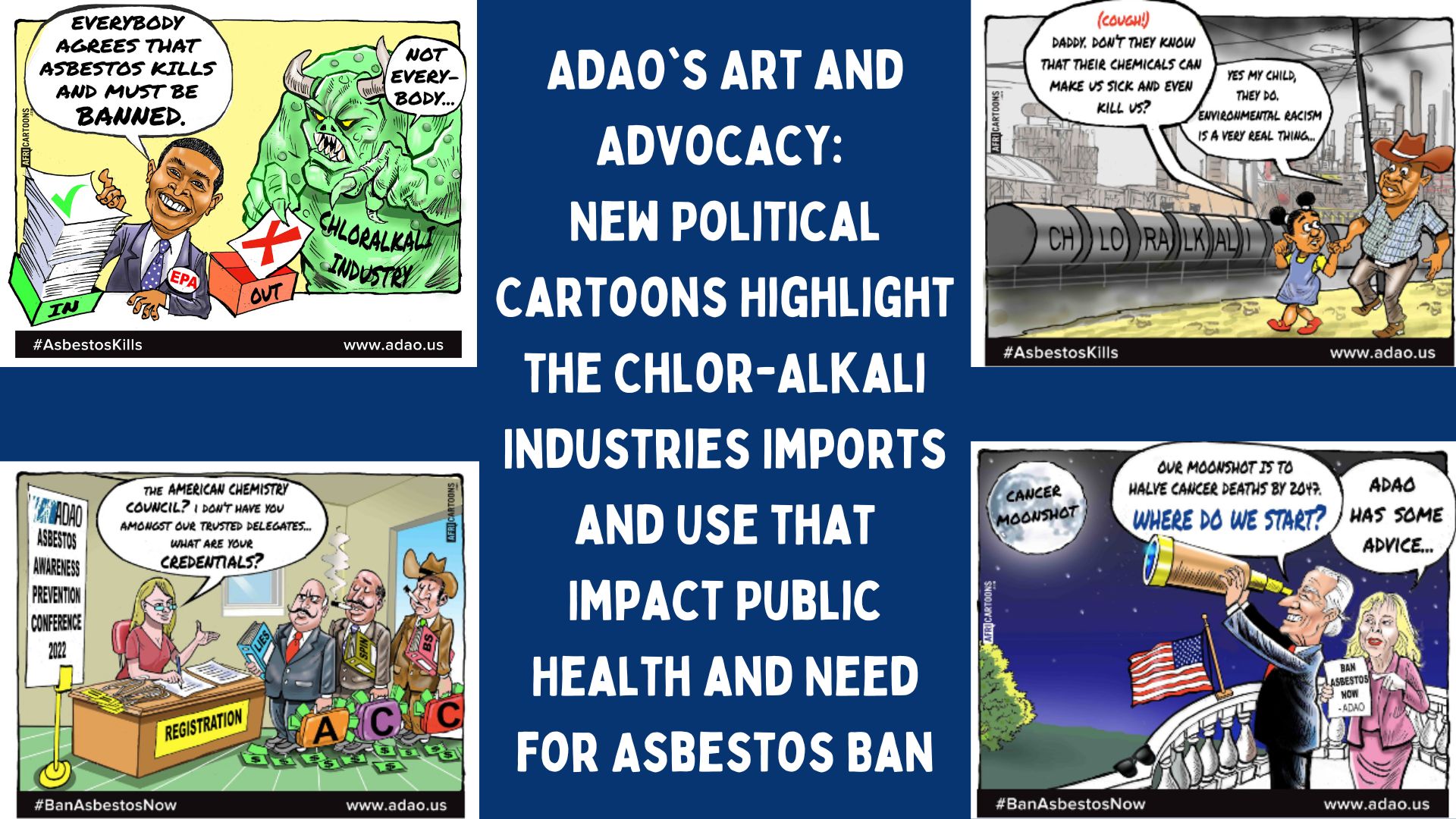 Recognizing the value of these political cartoons, we were excited to re-engage with John Curtis while preparing for our most recent Asbestos Awareness and Prevention Conference and discuss new 2022 cartoons to illustrate ADAO’s recent battle against the chemical industry; advocating for asbestos victims and moving forward to ban asbestos once and for all. Raising awareness and educating communities most at-risk for asbestos exposure is essential to fulfilling our commitment of protecting public health.

Over 40,000 Americans die each year from asbestos-related diseases. The latency period of an asbestos-caused illness is anywhere between 10-50 years. There is no safe level of exposure to asbestos. The 2022 cartoons convey the urgency we need to protect people over profit, and the importance of banning this toxic substance. 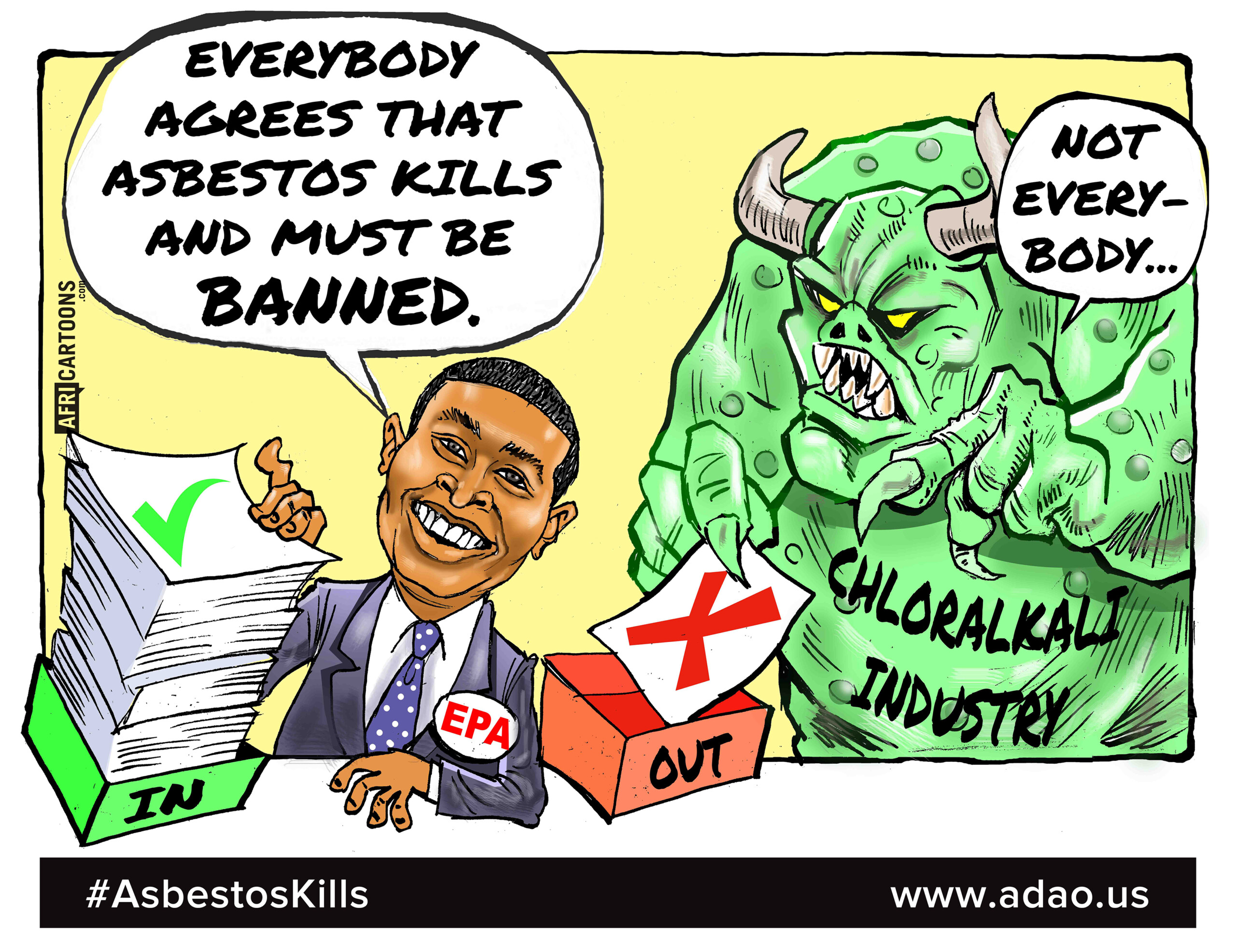 The new cartoons focus on the chlor-alkali industry, as they are the sole importer and user of asbestos. The chlor-alkali industry continues to import and use asbestos knowing full well that it is harmful and deadly to consumers. Earlier this year, the Environmental Protection Agency (EPA) deemed asbestos exposure of any kind an unnecessary risk to the health and safety of workers. Industry, however, continues using it and spreading lies about what would happen if the carcinogen was banned.

Currently, there are only three corporations, Olin, Westlake Chemical, and Occidental Chemical, that use asbestos diaphragms in 8 plants to produce industrial chlorine and caustic soda.

The first of the new cartoons showcases that. In it, you see the EPA’s new administrator, Michael Regan filing paperwork in support of an asbestos ban and saying, “Everybody agrees that asbestos kills and must be banned.” But behind him, a monster, labeled “the chlor-alkali industry” says, “Not everybody.” 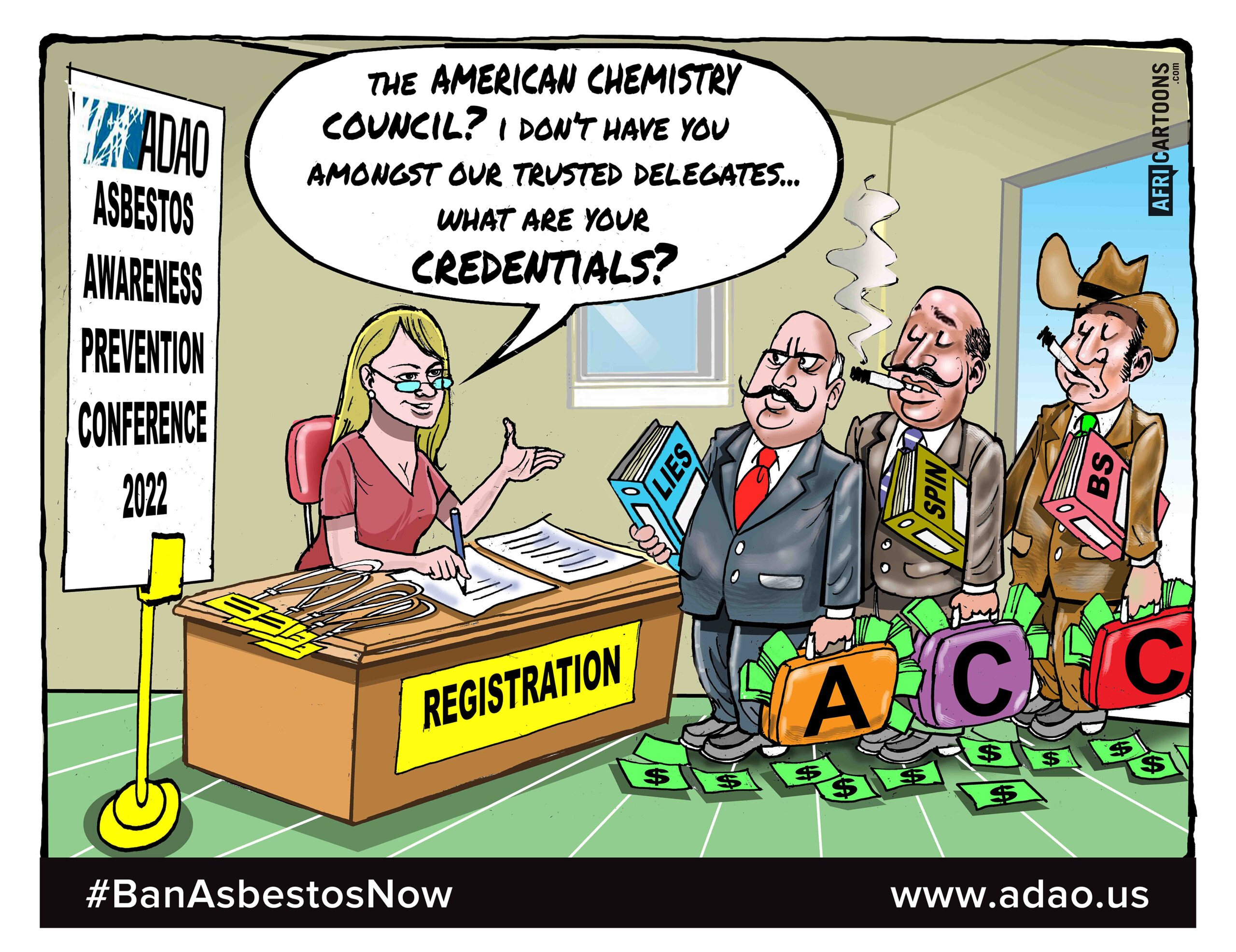 The second cartoon shows the chlor-alkali industry trying to sneak into the Asbestos Disease Awareness Organization (ADAO’s) annual Asbestos Awareness Prevention Conference. Each year, ADAO is the only nonprofit to hold a conference focused on asbestos prevention and advocacy. We bring together dozens of experts from all over the world to share science, evidence, and resources about asbestos. Meanwhile, rather than working constructively with ADAO, EPA, and Congress to transition to non-asbestos technology, the American Chemistry Council (ACC) and other trade groups instead launched an alarmist, misleading, and fear-mongering campaign in an attempt to block the EPA proposed Part 1 Chrysotile Asbestos Rule which would ban one asbestos fiber and six conditions of use.

The third cartoon showcases how the importation and use of asbestos contributes and perpetuates environmental racism in our country. You see a young child walking by a chlor-alkali plant coughing, and she asks her father, “Daddy, don’t they know that their chemicals can make us sick and even kill us?” Her dad answers, “Yes my child, they do. Environmental racism is a very real thing…” 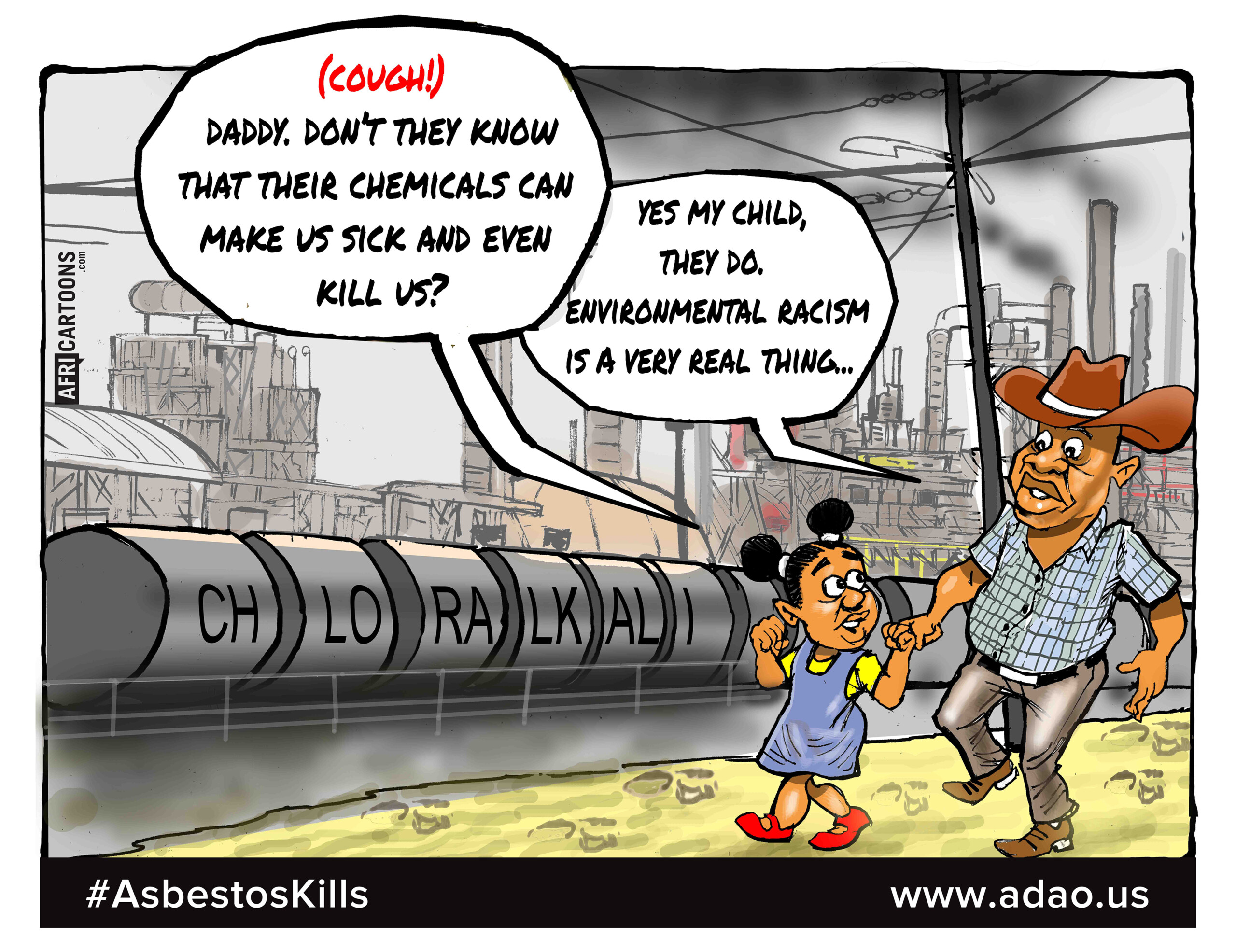 Asbestos has a significantly greater impact on communities of color through increased exposure to legacy asbestos — living in homes, and attending schools and workplaces that were built using asbestos. Direct exposure is rampant through chemical companies and industries with high occupational cancer risks. Asbestos disproportionately raises environmental hazards in communities or color through air and water pollution. This is clearly seen in Davidson, North Carolina, where there are more than 2,000 tons of asbestos-contaminated soil on the 130-year-old Linden Mill. When the mill was first turned into an asbestos manufacturer, it was a boon for Black workers, who had not previously been allowed to work at the cotton mill, but were employed at the factory. According to recent reporting by WFAE, many workers developed deadly asbestos-caused diseases and ultimately lost their lives, leading to a deep sense of distrust among longtime residents.

The fourth and final cartoon shows President Joe Biden and First Lady Jill Biden focusing on the Cancer Moonshot, which is to halve cancer deaths by 2047. In the cartoon, he asks her, “Where do we start?” FLOTUS says, “ADAO has some advice,” while holding a sign that says “Ban asbestos now.” 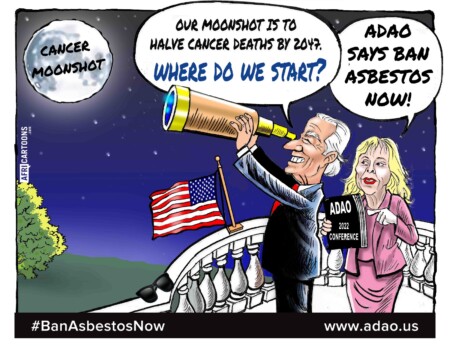 ADAO’s advice is this: Ban asbestos now, once and for all. The Alan Reinstein Ban Asbestos Now (ARBAN) Act of 2022 was introduced to the House and Senate by Representative Suzanne Bonamici and Senator Jeff Merkley. It would ban asbestos, allow a transition time to other more economical, environmentally-friendly, and healthier alternatives, and it would immediately start saving lives. We know what we need to do, and we’ve known it for decades. We urge Congress to pass ARBAN and send it on to President Biden, who we know is a strong advocate against all kinds of cancer.

Thank you again to John Curtis and Themba for these powerful, life-saving messages in art.

Together we make change happen.