Each year, ADAO dedicates April 1-7 to increasing awareness of asbestos and preventing exposure by bringing together experts and victims from around the world to share, learn, and take action. 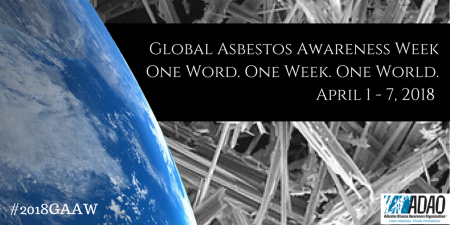 Asbestos is a known carcinogen and there is no safe level of exposure. Since the 19th century, asbestos was widely used in construction, shipbuilding, and the automotive industry. Without a ban, asbestos remains legal and lethal in the USA and nearly 70% of the world today. As such, it continues to kill more than 200,000 people globally each year, though — infuriatingly — every one of those asbestos-caused deaths is 100% preventable. Prevention is the name of the game this week and always: “Hear Asbestos. Think Prevention.”

Global Asbestos Awareness Week (GAAW) is dedicated to educating people about their asbestos risk and how to manage it in order to prevent asbestos-caused diseases. While promising research continues, prevention remains the only cure for mesothelioma. When it comes to asbestos and mesothelioma, knowledge truly is power and this week is about empowering and equipping people to protect themselves while we work for protective legislation.

Since founding the Asbestos Disease Awareness Organization (ADAO) in 2004, we have worked with the U.S. Senate to unanimously pass 13 Asbestos Awareness Week Resolutions and secured five U.S. Surgeon General asbestos warnings in an effort to prevent exposure to eliminate deadly asbestos-caused diseases.

Building on strength and collaboration, this year’s GAAW will focus on:

The week features daily educational resources from leading organizations, guest blogs, videos, and asbestos victims’ stories, and we’ll wrap it up on April 7th with an online candlelight vigil. We are excited to once again partner with artist and activist Firdaus Kharas during our week of awareness to feature a Public Service Announcement video, which captures the tragic reality about deadly asbestos. The 30-second animated clip will be available in six languages. We are also extra thrilled this year to dedicate one day of 2018 GAAW to our newly introduced bill in the U.S. Senate, the Alan Reinstein Ban Asbestos Now Act of 2017, which would fully ban asbestos in the U.S. within 18 months.

In 2017, we had our most expansive, inclusive week to date. We partnered with the U.K. based publicity firm McOnie, who shared GAAW information in over 40 countries, with materials translated into 6 languages. We’re so thrilled to partner with McOnie once again in 2018, and we are sure our reach will only grow from last year — it means that many more people around the world will receive this lifesaving information.

It is exciting to see the global community unite and collaborate for Global Asbestos Awareness Week. Thank you for joining us during this week of learning and community! Please follow the week via our website and through social media using #2018GAAW.

“I fight on for all our Meso Warriors past, present and future.” — Day One Ambassador: Mavis Nye, UK

“We Live Each Day with Passion and Fun” – Day Two Ambassador: John Panza, Ohio, US

“The Value of My Life in Dollars and Tears” – Day Four Ambassador: Heather Von St. James, Minnesota, US

“I Will Not Die in Vain” –  Day Seven: Remembering Lou Williams, Australia